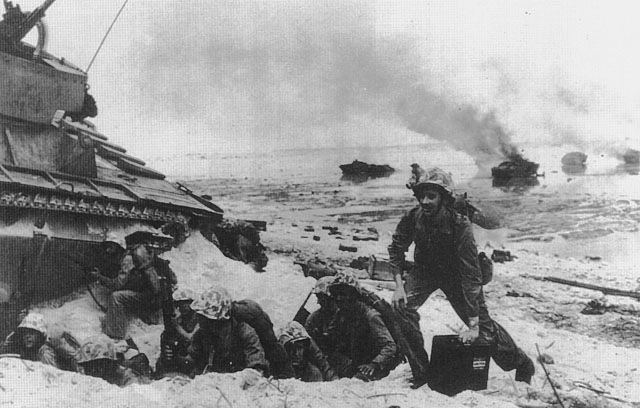 WASHINGTON: Tarawa. Saipan. Iwo Jima. Peleliu. Okinawa, Inchon. These are among the most sacred names in Marine Corps history. They define the sea-borne warriors’ in so many ways: sacrifice, grit, honor, competence. To most Americans, and to many Marines, those amphibious assaults are the soul of the Corps.

But those bloody and costly frontal assaults are not the future of the Marines, even as they plan for a return to sea-based operations after more than a decade of land wars in Aghanistan and Iraq. For much of the last two years reporters have heard the Marines talk of going back to their roots. Some sort of successor to the failed but fast Expeditionary Fighting Vehicle was in the works, we heard.

Lt. Gen. Kenneth Glueck, deputy commandant for combat development and integration, made clear this morning that the Marines will sidestep the full force of an enemy’s firepower in future amphibious operations. I asked him at a Defense Writers Group breakfast how the Corps would cope with the environment of death expected in an anti-access/area denial (A2/AD) battle for which the US military now trains and equips. “We want to pit strength against weakness,” Glueck told me, adding the Marines would look to exploit the “seams” in an enemy’s force and position.

The A2/AD battle is predicated on in-depth and layered defenses such as China’s advanced CSS-6 and CSS-7 short-range ballistic missiles (SRBMs), SA-10 SAMs, anti-ship cruise missiles and over-the-horizon targeting systems. A battle group of ships launching Marines in ship-to-shore connectors like the Amphibious Combat Vehicle (ACV) could be decimated by the rain of steel from such a power.

Careful not to identify any particular scenarios (though we were all thinking China), Glueck offered one other characterization: “The intent is not to go in force on force. The intent,” he said, “is to find the gaps.”

That sounds very much as if the Marines have read Chinese doctrine and decided they are going to fight fire with fire and rely more on speed, agility, intelligence and assets such as the V-22 and the F-35 and the Navy Department’s growing expeditionary fleet to leapfrog the strengths of an opponent and strike where they are not or to an unexpected front, a la D-Day.

As my colleague Sydney Freedberg wrote in a recent article about amphibious assault, taking a front will be complex. “Only once the first small force of Marines — along with airstrikes by F-35s and other planes, jammers like the EA-18G Growler, and cyber-attacks — have wreaked sufficient ‘havoc’ on the enemy’s defenses can the fleet come in close enough to launch the main assault.”

Bear in mind that Glueck spearheaded Expeditionary Force 21, the new Marine capstone doctrine (their guiding light in how they will fight and with what).

As Rob Holzer, former naval reporter at Defense News, put it in a recent op-ed for us:

Those ships will play key roles in making the Marines faster and able to bring more weapons such as the V-22 and F-35 to bear, along with the requisite Marines ready to take that beach.

Glueck’s best line of the morning came as he talked about the limitations on ship-to-shore connectors like the ACV: “The John Wayne factor goes way down after about an hour in one of these things.” Pick your own disturbing image as you’re eating your eggs and bacon….