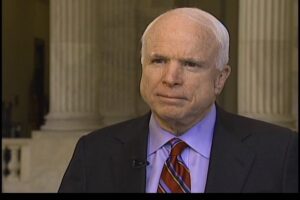 WASHINGTON: As Sen. John McCain of Arizona readies for what is almost certainly the last battle of his illustrious life, he appears to be casting aside tactical political positions and striking for the heart of what he believes best for the country. He did so again today, decrying passage of the latest Continuing Resolution and preparing the ground for what could become an epic battle for the heart of the Republican Party over spending come Christmas time.

The pattern appears pretty clear. Senate Armed Services Committee chairman McCain cast the deciding vote against the GOP’s supposed remedy to ObamaCare. McCain decried President Trump’s pardoning of the Arizona sheriff who demonstrated such contempt for the law that he was jailed for it. When Donald Trump and his Cabinet members said Nazis and their ilk in Charlottesville should not be condemned unless those protesting against them were, McCain reminded his fellow Republicans that, “White supremacists and neo-Nazis are, by definition, opposed to American patriotism and the ideals that define us as a people and make our nation special.”

Today, McCain released a letter he’d solicited from Defense Secretary Jim Mattis about the effects of Continuing Resolutions, one of the means by which Congress has evaded its Constitutional responsibility to pass defense spending bills on time for almost a decade.

“In the next three months, the Navy will delay ship inductions (into shipyards for repairs) and reduce flying hours, the Army will postpone maintenance, and the Air Force will limit execution of infrastructure funding. All services will delay training and curtail recruitment—leaving, according to Secretary Mattis, ‘critical gaps in the workforce skill set,’ the senator said in a statement.

McCain made clear he will fight any attempt to postpone proper spending bills again by passing yet another CR come December. “Congress’s vote to begin the year on yet another continuing resolution is inexcusable,” he said (the federal fiscal year begins Oct. 1). “It says that we are willing to accept the status quo for our military — where more service members are dying in training than on the battlefield. We must not repeat this mistake in December.”

This week, the senator is racing against time to get the defense policy bill passed by the Senate. And he has another race he is running, one no one wins in the end.

“Senator McCain received an MRI at the National Institutes of Health (NIH) in Bethesda, Maryland yesterday,” his office said in a statement. “Following the advice of his doctors, Senator McCain will continue to receive targeted radiation and chemotherapy treatments at NIH while maintaining a regular work schedule in the United States Senate.” He will bring unique moral authority to the fight in December.