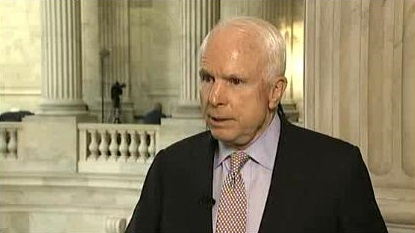 UPDATED: Mulvaney Wins Confirmation Thursday By 2 Votes; McCain Only GOP to Vote No

WASHINGTON: In a move that took some by surprise, the chairman of the Senate Armed Services Committee, Sen. John McCain, declared his opposition to President Trump’s pick to run the crucial Office of Management and Budget. McCain is the only Republican to declare his opposition to Rep. Mick Mulvaney so far. Democrats are eager to block him, believing his hard-line fiscal opposition to scrapping sequestration bodes ill for domestic spending.

However, Sen. Thad Cochran, chair of the Senate Appropriations Committee, was reported to support Mulvaney after indicating he might not. Reuters reported that Cochran would give Mulvaney 51 votes, a poor showing for such an important post and an indication of just how uncertain Trump’s support is from his fellow Republicans. It comes on the heels of Republicans abandoning Andrew Puzder, Trump’s nominee for Labor Secretary earlier today. Puzder withdrew from consideration.

“I believe that we must rebuild our military while at the same time putting our nation on a sustainable long-term fiscal path. We can and must do both,” McCain said on the Senate floor late this afternoon. “Unfortunately, Congressman Mulvaney has spent his last six years in the House of Representatives pitting the national debt against our military. He authored and supported amendments to cut national defense funding year…after year…after year. And as my colleagues and I sought repeatedly to find legislative solutions to reverse dangerous defense cuts and eliminate arbitrary defense spending caps, it was Congressman Mulvaney and his allies that repeatedly sought to torpedo these efforts.”

There you have it: the fundamental conflict between Tea Party/Freedom Forum types in the Republic Party and defense lawmakers, who want to see sequestration scrapped so they can increase the defense budget, something Trump has pledged to do.

McCain hammered away at Mulvaney. “He also said that ‘the only thing worse than those military cuts would be no cuts at all.’ This is the kind of a statement that could only be made by a person utterly detached from the reality of what these cuts have meant to our military service members.

“Tell that to the thousands of soldiers who were forced out of the Army because of these cuts.

“Tell that to the Marine pilots who fly fewer hours per month than their Russian and Chinese counterparts because of these cuts.

“Tell that to the Air Force maintainers stealing parts from retired aircraft and museum pieces to keep their planes in the air because of these cuts.

“And tell that to the crew of the submarine, USS Boise, who cannot deploy because their boat is no longer qualified to dive, and cannot receive required upkeep because of chronic maintenance backlogs…and the thousands of Navy sailors who have picked up the slack for an overworked Navy by going on extended deployments and spending more and more time away from their families…all because of these cuts.

McCain’s bottom line: “Congressman Mulvaney’s beliefs, as revealed by his poor record on defense spending, are fundamentally at odds with President Trump’s commitment to rebuild our military.” Since the OMB director is a key player in deciding the dispersion of federal funds, McCain’s opposition seems only logical. However, we’ll have to see how if other senators join him.