The military has tested a new commercial communications satellite system that potentially offers 300 times the bandwidth of current satellites. O3b Networks has demonstrated the technology both at sea, aboard the Navy’s Littoral Combat Ship Fort Worth in the Pacific, and and on land, for unspecified “members of the armed forces” at MacDill Air Force Base, which just happens to be the headquarters of the publicity-shy Special Operations Command.

How does this work? It’s all about the altitude. The higher the satellite, the larger the area it covers and the slower it orbits. At 22,000 miles up, geostationary (GEO) satellites effectively stand still over a single point on the earth’s surface and can cover a whole continent, making them the standard for communications. But altitude comes at a cost. There’s a literal financial cost, because a rocket powerful enough to get you there is expensive. There’s also a cost in time, because even at the speed of light it takes your message half a second to get to GEO and back. 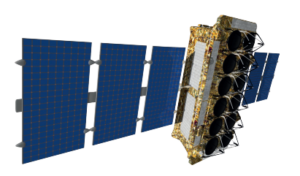 That’s a long enough lag that even a human brain can notice it. For high-bandwidth applications like streaming video — say, from military drones — the delay makes for major slowdowns. For high-speed software like cloud computing, it’s a dealbreaker.

So O3b puts its satellites only 5,000 miles up. That’s considered MEO, Medium Earth Orbit. (Protip: Never say “Middle Earth Orbit” unless you’re talking about Tolkien). 2,000 miles and below are Low Earth Orbit (LEO), favored by commercial imagery satellites and spysats, but at those altitudes satellites whip around the planet and can cover very little area at a time, making them impractical for most communications. MEO is a happy medium.

Since a 5,000-mile MEO orbit is a quarter of a 22,000-mile GEO orbit, the lag is likewise only a quarter as much: about 150 milliseconds, instead of 500. That shorter lag combined with a high-throughput Ka-band signal allows bandwidth that’s 300 times higher, 1.6 gigabits per second instead of the current standard of five megabits.

Meanwhile, each satellite is still high enough to cover a decent swath of the planet. (See the video above for how they hand off to one another). O3b has 12 in orbit currently and plans to launch at least another four. But eight birds were enough for continuous coverage of everything between 45 degrees north and south — roughly from Minneapolis to southern New Zealand. Some equatorial areas could get by with just four, such as the Cook Islands, home to some of O3b’s first customers.

In fact, O3b originally created its year-old network with the developing world in mind. The company’s name is an acronym for the “other three billion,” the estimated portion of the world’s population that lacks access to landline Internet. But it also has a contract with Royal Caribbean, since cruise ships have lots of Internet-hungry passengers and no way to reach a fiber optic cable. Navy warships are in the same boat, as it were, although they want bandwidth for intelligence and targeting data rather than Facebook. Special Operations teams, meanwhile, are often in the same position as O3b’s original target audience: scattered in remote places where poverty, geography, or both make fiber unavailable.

Neither SOCOM nor the Navy has gone beyond demos to a permanent contract with O3b, yet. But with budgets tightening while bandwidth demands increase, the company has some cause for optimism.