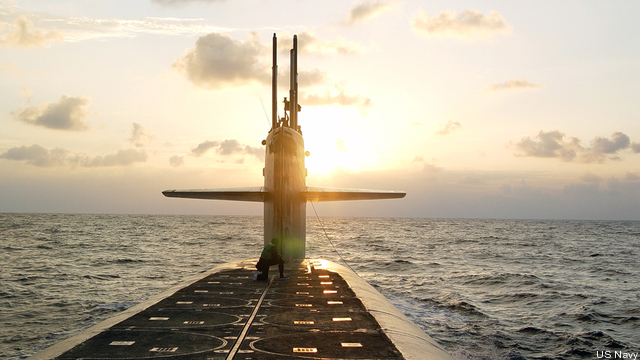 The Navy’s proposal to delay construction of new ballistic-missile submarines (SSBNs) meant to succeed the current Ohio class is both good and bad news for America’s shipbuilders, according to the program manager for the new “boomer” sub. But key members of Congress -– already at odds with the Administration over delays to the Virginia-class submarine — remain skeptical.

Pushing construction start on the 12 so-called “Ohio Replacement” subs to 2021 from 2019 could raise costs, though by how much is not clear, Brian Wilson from General Dynamics’ Electric Boat told Breaking Defense. On the other hand, the delay could give designers more time to refine the new subs’ blueprints, potentially avoiding costly complications in construction, Wilson said. “It is two more years of design effort, so there is the possibility of ensuring we have the most mature design in place.”

Electric Boat already employs 4,000 people on the Ohio Replacement program, according to shipyard spokesman Bob Hamilton, a figure that will surely rise as the submarines begin to enter production in a few years’ time. The comparable Virginia attack-submarine program employs 6,000 people at Electric Boat. Electric Boat and the Newport News shipyard in Virginia have together produced between one and two submarines a year in recent years.

With so many jobs at stake, sub boosters in Congress don’t want to take any chances with the Ohio replacement. “Some folks want to push the next-generation SSBNs into the future … to save money,” remarked George Behan, a staffer for Rep. Norm Dicks (D-Wash.), the ranking member of the House Appropriations Committee’s defense subcommittee. “The problem is you risk the industrial base,” Behan said. The Republican-controlled U.S. House of Representatives is debating a proposed defense budget that adds $25 billion to the White House’s roughly $525 budget submission and could reverse some of the Navy’s recent shipbuilding changes.

It’s not clear whether the Democrat-controlled U.S. Senate will also support reversing the Ohio Replacement’s delay. Sen. Joe Lieberman, a Connecticut independent who sits on the Armed Services Committee and whose state is home to Electric Boat and Groton submarine base, has opposed other cuts to sub production and could take a stance against the boomer delay. Lieberman has spoken out against the Pentagon’s January Defense Strategic Guidance, which codified changes to submarine build plans. “The changes outlined today greatly increase the risk that an adversary would calculate that we would not necessarily devote maximum effort to fighting back against them,” Lieberman wrote in a statement following the guidance’s release.

The Navy originally wanted 14 new boomers to replace the 14 Ohios. (Eighteen Ohios were built between 1976 and 1997 but the Navy recently converted four into conventional guided-missile subs.) To save money the Navy cut the new boomer class to just 12 vessels. Retired Rear Adm. Frank Lacroix estimated that design and production of the reduced class could set back the taxpayer $100 billion. In its more recent 30-year shipbuilding plan, the Navy admitted the cost of acquiring new boomers could put the annual ship construction budget $2 billion over historical averages in the 2020s and 2030s, potentially threatening other ship programs.

The two-year Ohio Replacement delay the Navy announced as part of the Defense Strategic Guidance helped protect near-term shipbuilding plans, but it could also create a gap between the planned retirement of the Ohios (as their nuclear reactors wear out) and the completion of the replacement vessels in the 2030s. “We believe this risk can be managed,” the Navy asserted.

Electric Boat’s Wilson is equally sanguine about the boomer delay. “Across the submarine industry this does represent a bit of a slowdown,” he told Breaking Defense. “It does create issues trying to ensure the industrial base and the people designing the components for us are able to conduct the work in a manner that supports the evolving maturity of the ship design.”

“But there’s a chance that design work on the submarine could benefit,” he added. Specifically, the Ohio Replacement could mine advancements introduced on the latest Virginia models as the latter come on-line over the next decade or so. “I steal — I should say, reuse — everything I can from the Virginia.”