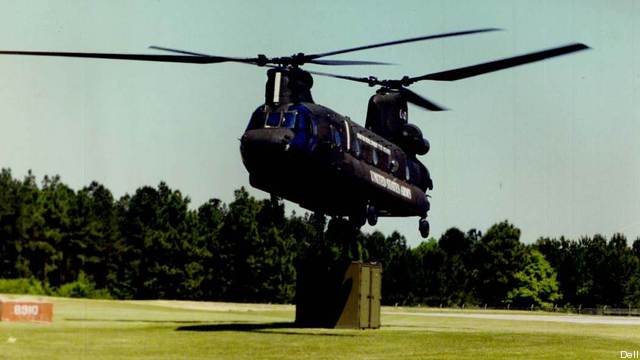 A new, enterprise-class IT backbone in a box has become the latest solution for a highly digitized U.S. military and first responders to access tactical data networks quickly and maintain connectivity wherever they are.

Developed to operate in a variety of environments where infrastructure is lacking or nonexistent, Dell’s Tactical Mobile Data Center (TMDC), is a completely customizable, air deployable data center that can be loaded onto transport planes, ships, trucks or slung under helicopters.

Each data center is housed in a weather resistant ISU-96 container and is flight certified for transport by military transports and commercial aircraft. The TMDC consists of several components, an IT pack and an air conditioning/power supply pack. The centers can operate on power from local power grids, generator power, or a combination of the two. It features quick disconnect cables for power, cooling and data, which allows operators to quickly customize the system to meet the local operational environment.

The TMDC originated from the Army’s need for a rapidly deployed mobile data center that could fit in a standard military container and operate in a variety of environments, Joe Trickey, brand manager for rugged and digital forensics at Dell Federal told Breaking Gov in an interview. One of the challenges that Army and Marine forces currently face when they deploy is packing their data centers, shipping them and then reassembling and testing them once they arrive. This results in down times of days or weeks as forces get their data centers and networks up and running, he said.

Because the mobile data center is housed in its own container, it is fully self contained and can be set up within minutes or hours of arrival, Trickey said. Once on the ground, the TMDC only needs to be connected to water for the cooling system, power and to satellite terminals, radios or data land lines. Multiple units can also be connected together, to increase data capability and they can be disconnected just as quickly to facilitate military operations. “With these units, it’s very easy to have a data center wherever you need it,” he said.

The TMDC’s IT pack consists of three server racks, power distribution units, data connections, and the option for additional servers and storage. The air conditioning and universal power supply pack contains a glycol closed loop system to cool the IT pack, a battery backup and power conditioning system, and the ability to support structured or generated power feeds.
Each ISU-96 container includes:

Because it can be deployed to almost any location and operate under a range of temperature and weather conditions, the TMDC can also be used as a backup or recovery site for disaster recover or to create new data centers in remote locations. The fully automated data centers do not require the container to be opened for routine operation.

The system was developed with Army cooperation to meet its operational needs, but other parts of the military, such as the Marine Corps, Air Force and Special Operations Command have shown interest in the system, Trickey said.

Besides battlefield deployment, civilian agencies such as the Federal Emergency Management Agency can also use TMDC’s during disaster response operations to set up communications and command and control centers, Trickey said. The commercial sector can also benefit from the mobile centers. He noted that Dell recently used a TMDC in Brazil to help set up and launch a call center.