Posted by Richard Whittle on September 22, 2016 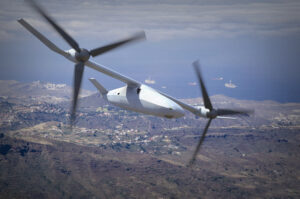 Bell Helicopter confirmed Thursday what the deputy commandant of the Marine Corps, Lt. Gen. Jon “Dog” Davis, told Breaking Defense a month ago. The company is designing a new tiltrotor drone about the size of the Air Force’s armed MQ-9 Reaper, with similar capabilities, that it hopes the Marines will buy. They call it the V-247 Vigilant, so named because Bell promises that two of the sea-based drones could provide Intelligence, Surveillance and Reconnaissance (ISR) over a given area 24/7.

“Some people call it the 24/7 instead of the 247,” said Vince Tobin, Bell vice president for advanced vertical lift development, formally unveiling the project at a National Press Club news conference. Tobin said it was uncertain when the Marines might put money in their budget for such an aircraft, but one of the questions they’ve been asking Bell, he said, is ‘How fast can you go?” Based on that. he said, “We interpret that as potentially for there to be a near-term need.” Bell, he added, is “already talking to potential suppliers.”

The V-247 is designed to meet the as-yet general Marine Corps requirement known as MUX, an acronym within an acronym standing for Marine Air Ground Task Force Multimission Unmanned Expeditionary. Under MUX, the Marines want their own ship-based, armed ISR drone so they won’t have to depend on land-based Air Force MQ-9 Reapers to support their operations.

“It isn’t hard to see the need for a platform that can keep up with our maneuver forces and mitigate the need for ever-shrinking permanent land bases in contested areas,” Tobin said, speaking 27 years after the first flight of the manned V-22 Osprey, the first production tiltrotor. Bell and Boeing Co. build the V-22, flown by the Marines, the Air Force Special Operations Command and soon the U.S. Navy and Japan’s military. The tiltrotor’s ability to swivel two rotors upward to take off and land like a helicopter and forward to fly like an airplane gives it far greater speed and range than conventional helicopters.

“We have arrived at this design based on our decades of tiltrotor experience,” Tobin said. “Tiltrotor meets the need. By its nature the technology provides a performance envelope unachievable with just a rotorcraft or just a fixed-wing aircraft.”

Two V-247s would fit inside the hold of a C-17 cargo aircraft, Tobin said. Despite its relatively small size, though, the V-247’s maximum takeoff weight is expected to be about 30,000 lbs — roughly three times the Reaper’s maximum takeoff weight. The aircraft would carry up to about 13,000 lbs. of fuel, armament and sensors, he said. It would have a mission radius of as much as 450 nautical miles, the same as a V-22, with 11 to 15 hours on station, or fly as much as 1,400 nautical miles on a tank of gas, depending on the mission. The V-247 also could refuel in midair, a Bell handout said.

The V-247 will be sized to fit on the deck of a guided missile destroyer, Tobin said. By folding its rotor blades and stowing its wing by swiveling it across the top of the fuselage lengthwise, it could fit inside a DDG’s helicopter hangar. On a stand to Tobin’s left as he spoke stood a big 1/8th scale model of the V-247 – far larger than the one we saw on Lt. Gen. Davis’s desk last month – automated to fold its rotor blades and stow its wing to demonstrate shipboard storage. Bell is expected to display the model at the Sept. 27-30 Modern Day Marine exposition at Quantico Marine Base, and at the Association of the United States Army’s annual meetings Oct. 3-5 in Washington.

Tobin said Bell could start building the V-247 as soon as 2023. He said key design elements are based on Bell’s experience building not only the V-22 but the new manned V-280 Valor tiltrotor.

Bell is building the Valor for the Army-led Joint Multi-Role Technology Demonstrator (JMR TD) program, a stage of the joint Future Vertical Lift program. A Sikorsky-Boeing team is building a rigid coaxial rotor compound helicopter with a pusher propeller for JMR TD, whose goal is to test vertical takeof and landing aircraft far faster and more agile than conventional helicopters. Bell and Sikorsky-Boeing both hope to fly those aircraft for the first time next year.