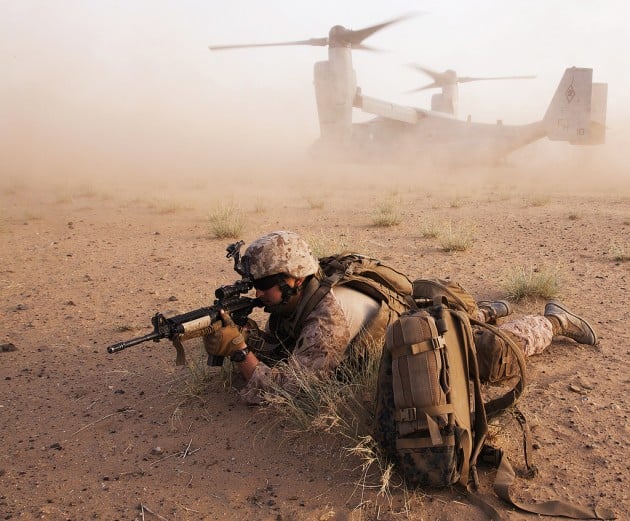 When V-22 Ospreys full of Marines take to the skies 10 years from now, they could be escorted by armed high-speed drones called MUX.

That’s become the Marine Corps plan because drones let you do things differently. Doing without a pilot inside makes it possible to build unorthodox aircraft that would work poorly carrying tender humans. You can also test unmanned aircraft more quickly, because you don’t have to validate pilot safety features, and because crashes don’t cost human lives. So the Marines figure they can get the MUX — a new armed, ship-based, vertical takeoff and landing (VTOL) drone — four to seven years before the Army-led Future Vertical Lift (FVL) project starts replacing existing helicopters with advanced, far speedier manned VTOL aircraft. 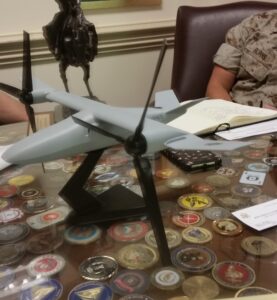 The Marine Corps’s rotorcraft requirements director, Col. John Barranco Jr., told me after a CSIS panel Friday on FVL that his service wants the drone first because “we have a gap that the Army does not have.” Specifically, the Corps needs an armed escort for its V-22 Osprey tiltrotor troop transports, which at 250 knots (287 mph) cruise more than twice as fast as its AH-1Z Cobra gunships. The Army doesn’t have that problem because the Army transports troops in conventional helicopters.

Bell Helicopter and a Sikorsky/Boeing team are building manned technology demonstrator aircraft under the FVL umbrella  — the V-280 Valor and SB>1 Defiant, respectively — that will be required to fly fast enough to escort an Osprey. First flights are scheduled next year. But no production FVL aircraft are expected until the early 2030s.

By contrast, “we’re trying to accelerate MUX and field it in 2026,” said Barranco, using the acronym within an acronym adopted for the sea-based drone. (MUX stands for MAGTF Unmanned eXpeditionary; MAGTF, in turn, stands for Marine Air Ground Task Force). For manned aircraft, Barranco said, “we have a lot of testing requirements. A lot of the burden in test is really related to aviation life support systems, air crew survivability, which we don’t have in an unmanned system. Crashworthiness. G-(force)-compliance for the air crew.” Since that won’t be needed for a drone, he said, “MUX could fill that gap, temporarily, to escort the Osprey.”

Obligingly, Barranco then posed and answered a pertinent question: “Why temporarily? Why not permanently?” Because, he explained, “You have to escort to the objective area and from the objective area. (That’s) kind of defeating some of the purpose and advantage that an unmanned system gives you, which is overhead persistence in the target area.” 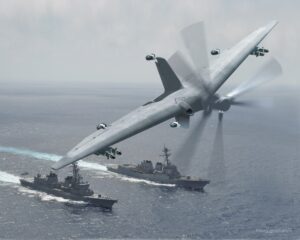 Lt. Gen. Jon “Dog” Davis, deputy Marine commandant for aviation, has said the Corps wants the MUX to do everything the Air Force’s fixed-wing MQ-9 Reaper drone can do and more. The Reaper, General Atomics Aeronautical Systems’ derivative of their MQ-1 Predator, offers airborne endurance in the 20-hour range; carries sensors to provide intelligence, surveillance and reconnaissance (ISR); and is typically armed with four AGM-114 Hellfire air-to-ground missiles and four 500-pound guided bombs.

Barranco said what the Marines primarily want the MUX to do is, when an assault is being mounted, “go ahead of you, get over the target area, show you that picture, stay there once troops are on the ground, and when you have to go back, be there when you come to resupply, be there when you come back, to do close air support, give you that persistent SA (situational awareness).” Escorting Ospreys to and from objective areas would sacrifice the ability to loiter over the target area, he said, but the MUX “can be a gap-filler temporarily for the seven or eight years until FVL starts coming on line to be our manned solution to provide escort in support of our Ospreys.”

Davis has said a relay of MUX could also serve as an airborne “picket line” around ships, which is one reason Bell Helicopter has named a tiltrotor drone it is offering for the job “V-247,” pronounced “vee-twenty-four-seven” to emphasize the potential for round-the-clock operations. Other contenders for MUX include a tail-sitter flying wing called Tern, which is being developed by Northrop Grumman for the Defense Advanced Research Projects Agency, and a Karem Aircraft tiltrotor called Swift. 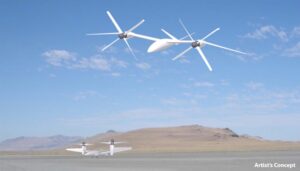 The powerful Joint Requirements Oversight Council (JROC) approved moving ahead with the MUX on Oct. 27 and the Marines will conduct an official Analysis of Alternatives next year. The JROC has also approved the much larger FVL program.

Barranco and two Army colonels on the FVL panel at CSIS indicated the services are gradually coming to agreement on broad requirements for the first aircraft to be developed, known for now as “Capabilities Set 3,” or as insiders say it, “cape set three.” In the past, Army leaders have been a lot less enthusiastic than the Marines about paying more for faster aircraft, since they generally operate over shorter distances. But Army Col. Erskine Bentley, Training and Doctrine Command Capabilities Manager for FVL, began his remarks by noting the strategic and tactical advantages faster VTOL troop transports could offer his service.

“The three panelists highlighted the broad support of the Army, Navy/Marines and SOCOM (Special Operations Command) for FVL within their services,” said Mike Hirschberg, executive director of the American Helicopter Society International. “There’s also growing support in Congress for FVL and accelerating it. Advocacy in the Pentagon and on Capitol Hill is going to need to be strengthened for that to happen.”

Maybe they could speed things up by taking the humans out of the acquisition system, too.