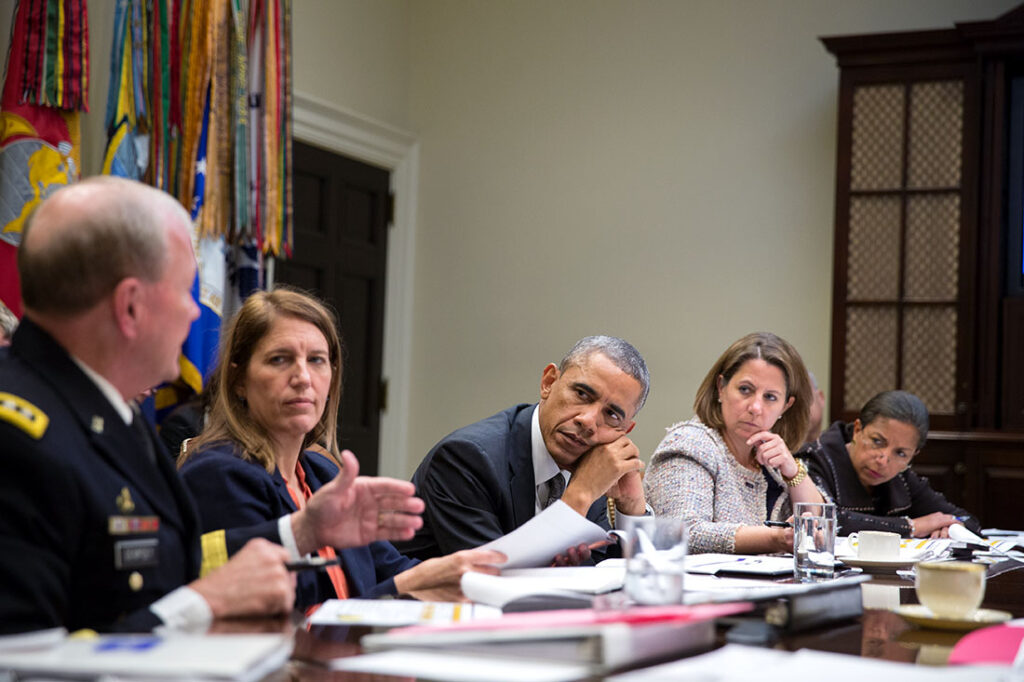 WASHINGTON: The most challenging national security problem for the Obama administration may be one of its own creation: the micromanagement of the Pentagon and Intelligence Community by a bloated and lackluster National Security Council.

This is one of those stories I’ve talked with dozens of people about for months. Every single person with whom I’ve spoken — Democrats and Republicans with vast experience in national security — has expressed deep worry about the issue and expressed exasperation with the administration’s conduct. They have been especially critical, regardless of party, of the performance of President Obama’s National Security Advisor Susan Rice.

A lifelong Democrat with more than 40 years experience told me he’d never seen such an inept group manning the desks in the NSC’s offices in the Old Executive Building. He pointed to the lack of real-world military or intelligence experience as a key problem. What are some of the symptoms?

Republicans have been reluctant to talk much about this in public, apparently content to hammer the president on other fronts. But Sen. John McCain, chairman of the Senate Armed Services Committee gave me the hook to hang this article on when he issued a statement about the five month period of uncertainty.

“The Pentagon’s puzzling silence about the operation led to confusion not only about what had taken place, but America’s strategic intent,” McCain said. “Five months to conduct what should be a regular and routine operation is too long. Five weeks to respond to a simple letter [from McCain to Defense Secretary Ash Carter] is too long. Whether these delays are the result of the micromanagement of the National Security Council or the bureaucracy of the Pentagon, they are unacceptable nonetheless.”

This isn’t just about the size of the NSC, which has swollen from 40 under the first President Bush to the almost 400 who staff it today. But the numbers are illustrative for an important reason. In an illuminating 1999 discussion hosted by the Brookings Institution by five former national security advisers who served six presidents from Lyndon Johnson to Bill Clinton, the NSC’s size came up, and Brent Scowcroft, National Security Advisor to Presidents Gerald Ford and George H. W. Bush laid out this formula:

“The basic rule is that you shouldn’t have so many people that you can duplicate the work of the departments. I would say each of your geographic or functional areas ought to have one or two people – rarely more. They ought to get the work from the departments, massage the work, keep you informed, and so on. I think there is a real danger in turning the NSC into another large bureaucracy, and I think it really needs to keep flexibility,” he said. Scowcroft cut the staff from 50 down to 40.

Given the size of today’s staff, that means, almost by definition and certainly if you use Scowcroft’s standard, that the White House NSC staff has to run the Defense and State Departments. Otherwise, they wouldn’t have much to do since the NSC’s job in law is to coordinate and oversee — not make — policy.

But it’s also the quality and speed of the NSC’s decisions and coordination, as noted in the examples above. Consider the mixed message President Obama sent on Dec. 14 when he told the world we were containing Daesh but needed to do much more in light of their bombing of the Russian airliner and the attacks in Paris and San Bernadino. I’m pretty sure he’s actually addressing two different issues — Daesh-spawned terrorism and their control of large sections of Syria and Iraq.

These two issues need to be addressed separately. The administration and our allies need to make sure these are clearly separated in the minds of both the public and policymakers. I personally think Obama is right to keep America’s presence on the ground in Syria and Iraq as small as possible because our being there simply provides ammunition to the madmen and aspiring caliphs who wander that part of the world. But message clarity and discipline is absolutely imperative to make sure that happens. It is a key part of the NSC’s job — and it is lacking. Consistency over time and the ability to make prompt — but not rushed — decisions have to be maintained.