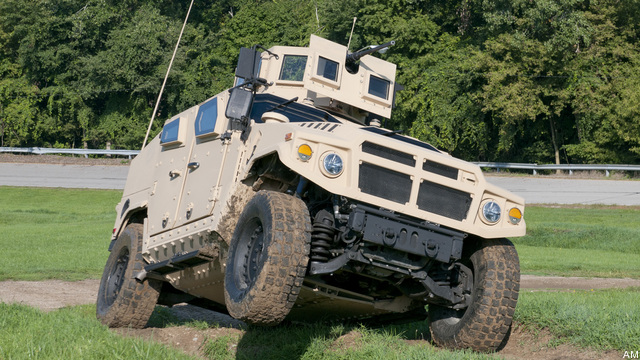 UPDATED: Navistar has withdrawn its protest — click here for the latest.

That’s the military’s current plan to build Joint Light Tactical Vehicles (JLTVs), which will replace most of the Army and Marine Corps’ vulnerable Humvees and unmaneuverable MRAPs (The program is now on hold, probably for months, while the GAO resolves a protest from rejected bidder Navistar). But the full cost to the taxpayer will be much higher, even if the program meets its ambitious target price per vehicle — and the pressure to cut back quantities will be intense.

The Pentagon has not released an estimate for the total cost of the JLTV program, and — after several days of discussions with Breaking Defense — the program office declined to issue one. With at least three companies still in competition (Lockheed, Oshkosh, and AM General), the final design undecided, and production not scheduled to start until 2015, there are simply too many unknowns in the acquisition costs alone. (Operating, maintaining, and supporting the vehicles over decades of service is often more expensive than buying them in the first place; the program expects to have some estimates by year’s end). But sources in the Defense Department, industry, and Congress isolated the variables for Breaking Defense.

First off, add to the estimated $13.6 billion to buy the vehicles another billion to develop them. Research, development, testing, and engineering work on JLTV will cost $944 million by the time it’s complete in 2017, said JLTV Deputy Project Manager Pamela Demeulenaere in an email to Breaking Defense. Some of that goes directly to the competing companies. The Pentagon awarded contracts for technology development in 2008 and contracts for the next phase, engineering and manufacturing development, last week. The rest goes to the government’s own extensive test activities — it would be unwise just to take the companies’ word for what their vehicles can do — and to the administrative overhead to run the program.

The $250,000 target price for each JLTV is what the government is willing to pay the winning contractor (whoever it turns out to be) for the vehicle. It doesn’t include the cost to the government to manage the program or to field the vehicles to units once they’re delivered. It doesn’t even include everything the Pentagon will have to pay to industry, because it’s just the basic cost of a vanilla JLTV, not one fully kitted out for combat. Before roadside bombs and guerrilla ambushes made every supply convoy a combat operation, the military could use unarmored trucks without weapons or radios to call for backup. Not any more.

The basic $250K JLTV will include extensive built-in protection — what’s called the A-kit. But troops will be able to bolt on additional armor for high-risk operations — the B-kit. The military doesn’t need to buy a B-kit for every single vehicle, but one for every three JLTVs is a likely ratio, and the cost per B-kit is at least $50,000, so estimate another $910 million. That takes the program at about $15.5 billion.

The cost for an M153 CROWS remotely-operated weapons station — a kind of remote-controlled turret that lets the crew aim and fire from inside the armored cab instead of exposing themselves in an open hatch — is about a third of a million dollars, going by the latest contract to manufacturer Kongsberg. But you have to add to that the cost of the actual weapon in the turret (typically a machinegun or a rocket launcher), then subtract the fact that not every JLTV will be armed. What vehicles get which weapons is a decision the military hasn’t made yet. As a guesstimate, if the one JLTV in three that gets an additional armor B-kit is also armed with CROWS, that adds $5.9 billion, putting the program’s total cost over $21 billion. However, since CROWS is a separate contract we won’t attach that cost to the JLTV program.

Every JLTV is likely to have a digital radio and GPS map to show its own and friendly forces’ locations. Since the cancellation of the JTRS Ground Mobile Radio, the Army’s baseline radio for combat vehicles has been the Harris PRC-117, and every vehicle gets at least a Blue Force Tracker (BFT) GPS map — but unit leaders require more elaborate command networks and higher-bandwidth radios to run them. The exact kit and cost vary widely depending on the size and type of unit that the leader commands, and the Army is reorganizing its brigades anyway, so here again the total cost is unguessable. And those are separate programs.

After that, we’re getting into variables too variable even to guess.

There’s also a host of specialized equipment some units will buy for some JLTVs. For example, the Marines like to equip their vehicles with “deep fording” kits to drive through surf in landing operations. Some of the add-ons will be billed to the JLTV program, but others will be bought under separate accounts. So the question marks keep proliferating, but it’s pretty clear the total cost of the JLTV program could climb north of $20 billion — if the current plan holds.

The competing companies swear they can make the $250,000 cost target for the vehicle itself (not counting weapons, radios, b-kits, government overhead, etc. etc.), but it’s an ambitious target. Plenty of programs go over budget. Conversely, as budgets tighten, the economy limps along and the strategic “rebalancing” to the Pacific shifts attention and funding from ground forces to the Air Force and Navy, there may well be considerable pressure to trim the JLTV program.

The Marines have already scaled down their JLTV buy to get to the current 5,500, which would replace only one in four of their Humvees. It’s possible they would go lower but it’s not likely, especially since they will currently get the first vehicles off the production line.

The Army’s 49,099-vehicle buy, however, is spread out over many more years, exposing it to many more uncertainties and it’s a softer number to begin with. The service is not only cutting back on its number of brigades but reorganizing those brigades to centralize many support elements, which would allow reductions in the total number of trucks. Last year, the Army stated a minimum objective of 20,000 JLTVs — enough to replace all its MRAPs but not most of its Humvees — which would slash the program quantity in half.

Cutting the quantity in half, however, would not halve the cost. That $250,000 per vehicle is actually an “average unit manufacturing cost.” The first vehicles off the production line will cost much more, the later vehicles much less as industry perfects its processes and economies of scale come into play. Slashing the quantity sacrifices efficiencies of scale, so you never get to those later, cheaper vehicles, driving the average cost way up. And as managers of fighter programs know all too well, that creates political pressure to cut the program further, which raises average cost still more. Once a program gets into this “death spiral,” it’s anyone’s guess how low the total numbers go — or how high the average price.