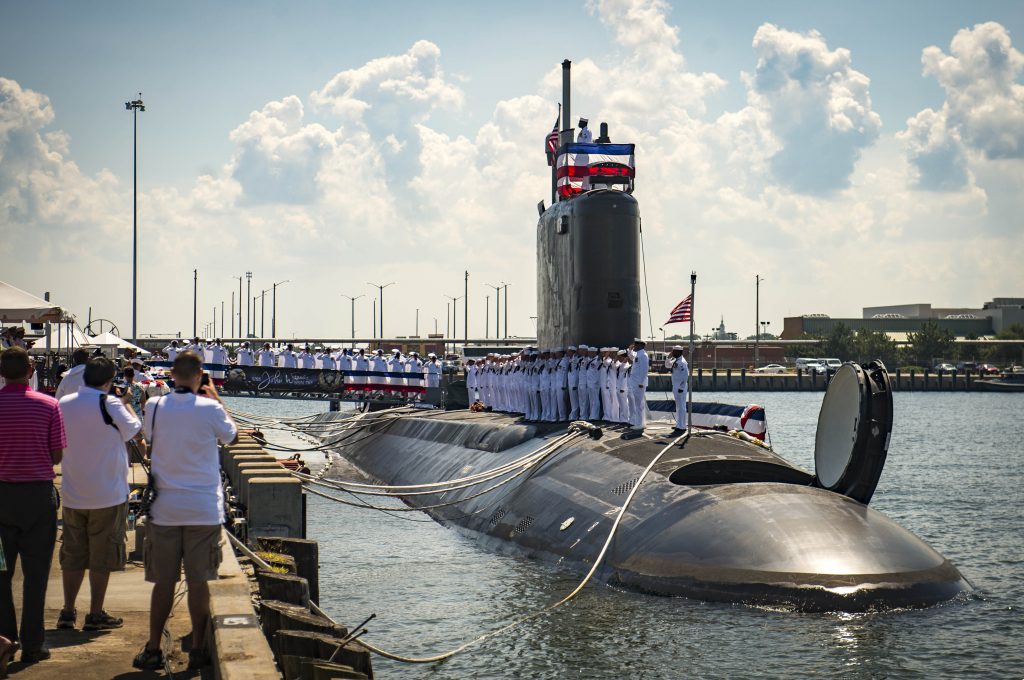 WASHINGTON: The Navy might want to mothball one aircraft carrier and scuttle two amphibious ships in its 2020 budget, but when it comes to fast attack submarines it wants to step up its game.

In the Trump administration’s broad outline of its fiscal year 2020 federal budget request released Monday, the Navy asks to build three fast attack Virginia-class submarines, as opposed to the two it had scheduled for 2020 in previous budget projections.

The focus on submarines as opposed to big-deck carriers and amphibs is directly tied to 2018’s National Defense Strategy, which prioritizes countering Chinese and Russian advances in anti-access weapons that are designed specifically to keep US surface ships as far from the littorals as possible.

The Trump administration’s $718 billion request for the DoD — and $750 billion defense-wide — is about to run into a bipartisan buzzsaw on Capitol Hill given the administration’s plan to slash domestic funding and attempt to bypass the $576 billion DoD spending cap imposed by over $70 billion, every item is going to have to fight for its funding this year.

But Congressman Joe Courtney, chairman of the House Armed Services subcommittee on seapower and projection forces, is calling the proposed sub plan a win.

“Today’s announcement is a welcome reversal from the Department of Defense which, just eight months ago, publicly opposed my efforts to increase fast attack submarine construction to three per year,” he said in a statement.

The request comes as work is about to begin on new Virginia Payload Modules which will be placed on all boats built in 2020 and beyond. The VPMs include four large-diameter, vertical launch tubes capable of launching Tomahawk cruise missiles, plus new generations of missiles, or a variety of unmanned underwater vehicles. The four new tubes will be able to handle 28 additional Tomahawks, bringing the total in each boat up to about 65 missiles.

That extra punch will offset, on some level, the growing Chinese and Russian submarine modernization efforts currently underway, with Beijing growing its sub force to an estimated 70 boats by 2020. The addition of the third hull, then, is a “welcome, albeit overdue, recognition that our submarine force is too small and heading in the wrong direction,” Courtney said.

The proposed ramp-up in attack sub construction — if it makes it through Congress — aligns with the Navy’s 2016 Force Structure Assessment, which called for bolstering the attack sub fleet from 48 to 66, marking the largest increase of any ship type. Navy CNO Adm. John Richardson said earlier this year he’s taking a new look at the 355-ship fleet requirement, suggesting that the number might have to be tweaked, though any cuts or slowing down of the build schedule would likely be found in the surface fleet, which is older, and more vulnerable, than stealthy undersea assets.

But Thomas Callender, the Heritage Foundation’s senior research fellow for Defense Programs, warns that adding an additional hull in 2020 might present some complications for the industrial base. The shipbuilding industrial base “does not have a large capacity margin to accelerate the build rate,” he told me.

Moving up the build schedule from 2022 to 2020 “might increase the risk to the Virginia-class program as well as potentially the Columbia-class program,” Calendar noted. “This presents a challenge for shipyards to have enough sufficiently trained and experienced workers” for the three boats.

The addition of a submarine, along with one destroyer, while cutting one LPD Flight II form the 2020 budget “appears to signal a prioritization by OSD and the Navy on platforms they assess will more survivable and contribute more to a great power competition,” he said.

The Navy estimates that the new Virginia’s with the VPMs will cost about $3.2 billion apiece, up from $2.7 billion for the older boats.

The added boat also comes as the Navy prepares to start building its Columbia-class submarines in 2021, which will carry a full 70 percent of the nation’s nuclear triad in the coming decades. The Navy recently stood up a new office to oversee the strategic aspects of the $128 billion Columbia program, which is currently the service’s largest acquisition effort.