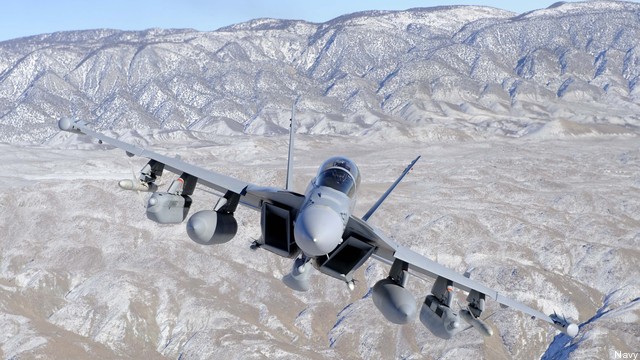 PENTAGON: While the Air Force and the Marines stake their future on a great leap forward to the stealthy F-35 Joint Strike Fighter, the Navy is taking what one officer called “baby steps” into the future: a careful, incremental upgrade of electronic warfare systems to jam enemy radar instead of just hiding from it. The fleet is moving, slowly but surely, from 1960s-vintage EA-6B Prowlers carrying 1970s-vintage jamming pods — complete with vacuum tubes — to supersonic EA-18G Growlers armed, as of 2020, with a digital Next-Generation Jammer.

Despite persistent rumors the Navy will cut back its F-35 purchase, the service remains officially committed to a carrier-launched version of the F-35, the F-35C. They’re just not counting on the F-35 to penetrate increasingly sophisticated air defenses on its own.

“It’s a great capability for us to welcome to the [carrier] air wing,” Navy Capt. John Thompson said of the F-35C. (Thompson has more than two decades experience in the Prowlers and is now the service’s resident expert — requirements officer — for both Prowler and Growler on the Navy’s Pentagon staff.) “You have a fantastic mix,” he told Breaking Defense. That mix will be:

The Air Force will have a similar mix of stealth F-35As and non-stealthy F-15s and F-16s for years to come. Except for 14 powerful but lumbering EC-130 “Compass Call” turboprops, however, it has essentially gotten out of the jamming business.

By contrast, the Navy has made jamming a top priority. In the current issue of the prestigious Proceedings of the US Naval Institute, the Chief of Naval Operations himself made sure to hitch the Navy’s longstanding strengths in traditional electronic warfare to the sexy emerging area of cyberwar.

“The EM-cyber environment is now so fundamental to military operations and so critical to our national interests that we must start treating it as a warfighting domain on par with–or perhaps even more important than — land, sea, air, and space,” wrote Adm. Jonathan Greenert. “Wars increasingly will be fought in the EM spectrum and cyberspace, so we cannot treat EM-cyber capabilities as simply enablers for air, land, and space operations.”

Greenert expressed skepticism about stealth in an earlier Proceedings article this summer, and the Navy is investing heavily in jamming.

Currently, as part of what Thompson called the Navy’s “stepping stone,” “baby steps” approach, the Growler has a better electronic warfare sensor system (the ALQ-218 receiver) than the old Prowler, but, for now, it still carries the same jamming pod, the ALQ-99. This summer the Navy launched a competition for what it calls its Next-Generation Jammer, set to enter service on the Growler in 2020.

F-35 advocates argue you don’t need a dedicated jamming aircraft because the Joint Strike Fighter is so packed with digital technology that it can wage electronic warfare as well as carry bombs. (Click here for more from two F-35 fans on the Breaking Defense Board of Contributors, analyst Robbin Laird and retired Air Force ISR chief David Deptula). That’s true, concedes Capt. Thompson — up to a point.

The digital radar technology called AESA (Active Electronically Scanned Array) allows the same transmitter to either look for the enemy or to aggressively jam his systems. That double-edged sword, in fact, is the core of the future Next Generation Jammer, explained the jamming expert on the CNO’s staff, Cmdr. Dave Edgarton, who like Capt. Thompson is a 20-plus-year veteran of Prowlers: “It allows us to use the modern technologies that are available in AESA radars and leverage them for electronic attack,” Edgarton said.

But “any generic AESA” is not the same as a purpose-built jammer, Thompson emphasized. Plenty of airplanes have AESA, not just the F-35 but current Navy Super Hornets and Air Force F-15s. To act as jammers, though, “they need the right processing, waveform generation [i.e. radar frequency, wavelength, etc.], power, cooling,” he said. “To say that the AESA air-to-air radar has the same capabilities as a Next-Generation Jammer is mixing apples and oranges.”

The AESA on the F-35, for example, is built to spot air and ground targets, with jamming capability as what Cmdr. Edgarton called a fortunate “by-product.”

“It’s optimized to be a targeting radar; the fact that it can also jam is fantastic,” Capt. Thompson agreed. But the same basic AESA technology, with a differently sized antenna to generate different frequencies and wavelengths, “backed by different processing, different power, different cooling, and purposely built to be a jammer… would have much greater capabilities.”

That’s why the Navy sees the Next-Generation Jammer as critical. Navy electronic warfare experts have been upgrading the current ALQ-99 and inventing new tactics for it for decades, but now, “we cannot squeeze any more out of it,” Thompson said. “Our main limiting factors [are] the array itself, power generation, and the processing, [not] doing the math fast enough.”

Potential enemies around the world are now upgrading to AESA radars, Thompson said, and “to keep pace with them the jammer has to make the same leap, from travelling wave tubes” – a specialized form of vacuum tube found in the ALQ-99 – “into transistor modules.”

There’s no way to backfit this new technology to the old ALQ-99, Thompson said. “We would’ve if we could.”

While in theory it might be possible to hang a new, next-generation jammer off the old Prowlers, the EA-6Bs have about 10,000 flying hours of wear apiece, they’re subsonic (except in a steep dive), and their bulky, 1960s design is painfully easy to spot on radar. The sleek new EA-18Gs are faster, they’re more agile, and while not stealthy to anywhere the same degree as the F-35, they’re at least less radar-reflective than the bulbous Prowlers. The new planes are also built from the ground up to accommodate modern digital electronics from AESA to secure datalinks (called Link-16) to helmet-mounted targeting displays.

As a result, “we can use Growlers in ways we cannot use Prowlers,” Thompson said. “We’re able to use it much more aggressively.”

F-35 advocates would say all those improvements are still not enough: Without true stealth — the kind that has to be designed into an aircraft from the beginning, as on the F-35 — the Navy’s Super Hornets will be too easily spotted and shot down by cutting-edge “anti-access/area denial” defenses, even with Growlers on jamming duty. The Navy thinks it can still keep non-stealth planes alive, both by escorting them with dedicated jamming aircraft and by arming them with longer-ranged missiles so they don’t have to penetrate as deeply into enemy airspace to hit their targets.

On the flipside, in a real-world operation, Air Force F-35s would also enjoy Navy Growler support if the joint-force commander decided that they needed it. That’s especially true because the two services are working hard to coordinate their approach to what they call the future: AirSea Battle. So if the Air Force has bet wrong, and the F-35’s stealth and jamming capabilities don’t hold up against ever-improving radar systems, they may have to count on the Navy’s electronic warfare investments, too.