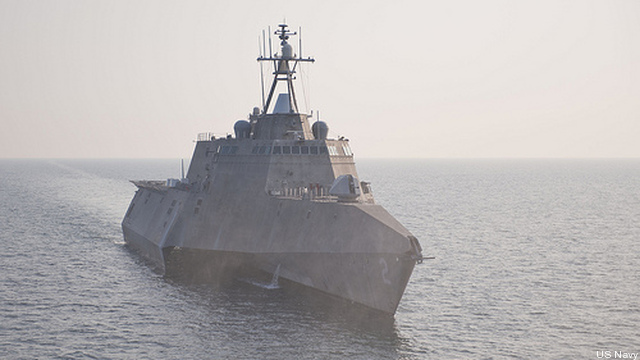 NATIONAL HARBOR, MD [updated 7:30 am Thursday 19 April with Congressional comment and Raymond Pritchett’s retraction] : The smartest man in the Department of the Navy, Under Secretary Robert O. Work, erupted today in a passionate defense of the service’s integrity in how it counts its ships and of the controversial Littoral Combat Ship‘s place as the most numerous class in the future fleet.

“There is no subterfuge about this at all,” Work said ahead of a key House Armed Services Committee oversight meeting on the size of the fleet, amidst accusations [since retracted] by “Information Dissemination” blogger Raymond “Galrahn” Pritchett that the service is counting support vessels it never previously included in its “battle force” to bulk up its current and projected numbers. “The 300 ships that we [will] have in 2019 are ships that we count right now, right now,” he said, and do not include such traditionally excluded auxiliaries as small patrol craft or hospital ships.

Work did not deny that the Navy might want to count such craft sometime in the future: “We have not looked at the battle force counting rules, which are extremely arcane, since the early eighties,” he said, back when Reagan’s politically savvy Navy Secretary, John Lehman, set up the system in context of a clash with the Soviet Union and to support his push for a 600-ship fleet. But, Work insisted, the Navy has not changed the system yet.

Nor, Work emphasized, has the Navy come up with its official number for how many ships it needs to execute the Administration’s new global strategy. “The force structure assessments are tied to your strategy, and it’s a very formal process run through the staff, brought up through the Navy and Marine Corps to the Secretary of the Navy,” he said. “Right now we’re in the process,” he said, with Navy Secretary Ray Mabus being briefed and briefings to Defense Secretary Leon Panetta still to come. The final number deemed necessary will be “about 300,” Work said, but it may well go somewhat higher — particularly in categories like the number of amphibious warfare ships required to deliver two Marine Expeditionary Brigades, currently set at a minimum of 32.

Whatever the exact number, Work said, the future fleet will be collectively as capable as the one Lehman envisioned. In terms of maintaining global presence, Work insisted, “the United States Navy will be everywhere in the world that it has been and it will be as much [present] as the 600-ship navy.” In terms of combat power, “the 600-ship Navy called for a hundred guided missile cruisers and guided missile destroyers,” Work said. “Our 300-ship fleet will have approximately 90,” with more advanced missiles and fewer potential enemy ships to target.

Lehman’s plan “also called for 138 ASW [anti-submarine warfare] ships,” Work went on. “Well, the ASW threat isn’t as bad as it was in the 1980s,” when the Soviet submarine fleet threatened to cut off US reinforcements to NATO across the Atlantic. So the Navy instead plans to address anti-submarine warfare, minesweeping, and defense against Iranian-style swarms of small attack boats with 55 Littoral Combat Ships, designed to swap out equipment modules depending on which of the three missions is most needed at the moment.

Work acknowledged widespread skepticism about the LCS. “We have to prove it,” he said. “There are a lot of skeptics, we have to get out to the fleet, we have to show it [in operation].” The Navy is already making changes based on experience with the two ships in service, LCS-1 Freedom, built by Lockheed Martin, and LCS-2 Independence, by General Dynamics. As critics predicted, the approximately 80-person crew — counting both permanent crew members and those that come with the specific “mission module” — is indeed overworked keeping the ship in operation, leading the Navy to consider four-month deployments instead of the standard six and increasing the crew size.

The other concern about the ship’s small crew is that there are simply not enough sailors to do damage control if the already lightly-built LCS is hit. That’s part of the reason the Pentagon’s independent Director of Operational Testing & Evaluation concluded LCS was not survivable enough for a “hostile combat environment.” But Work struck back against the idea that the Navy is building an overpriced police boat.

“LCS is a warship. It is a WAR ship,” Work repeated. Caveating remarks last week by Chief of Naval Operations Adm. Jonathan Greenert, who acknowledged limits to how the LCS could operate in wartime, Work said that “of course, it’s not going to go into the Straits [of Hormuz]” if the Iranians decide to shut them down. “The only thing that would survive in the Straits if a war started would be a submarine,” Work said. The US military would have to wear down the Iranian “anti-access / area denial” network from a distance before it tried to force the Straits, a battle in which Work and Vice Chief of Naval Operations Adm. Mark Ferguson said research in directed-energy weapons and electrically powered railguns would be crucial to beating land-based defenses with a ship’s limited ability to carry ammunition.

In missions short of forcing the Straits, Work said LCS’s minesweeping module, now in development, will be more capable than anything now in the fleet — admittedly not a high bar given the Navy’s long neglect of the minesweeping mission. Its sub-hunting module, also still in development, will out-perform at least the Perry-class frigates now being retired. And when armed with its full complement of guns and missiles (only an interim missile is now available) to take on swarms of small boats — what the Navy calls “Fast Attack Craft” (FACs) and “Fast Inshore Attack Craft” (FIACs) — Work said, “it will make every FAC/FIAC out there think twice about coming out to sea because it will kick their asses.”

Overall, Work said passionately, “This is the right ship at the right time for the right fleet design and this will be the best United States Navy battle force that this Navy has ever seen.”

[Updated 7:30 am Thursday 19 April:] Witnesses at the House Armed Services oversight committee hearing — including MacKenzie Eaglen, a member of Breaking Defense’s own Board of Contributors — expressed grave doubts about the Navy’s long-term shipbuilding plan, noting that the ramp-up to 300 ships in 2019 occurs not only after the current Administration leaves office but beyond the current Future-Year Defense Plan (FYDP), pulling the traditional trick of assuming new funding miraculously comes from somewhere unspecified in the future.

But neither witnesses nor members challenged the Administration’s ship-counting methodology. “I checked the detailed supporting data for the FY13 30-year shipbuilding plan,” one Congressional source told Breaking Defense after the hearing “and the year-by-year totals reported for the size of the Navy do not include PCs [patrol boats] or TAHs [hospital ships].” That’s contrary to the claim made online by usually reliable “Information Dissemination” blogger Raymond “Galrahn” Pritchett, who admitted his error in followup posts yesterday and this morning, before going into his deeper concerns about the shipbuilding plan.

Ironically, both Pritchett and the Congressional source noted that if the Administration followed the letter of the 1981-vintage ship-counting rules, it could easily include not just the Cyclone patrol craft but an array of other vessels it doesn’t currently count.