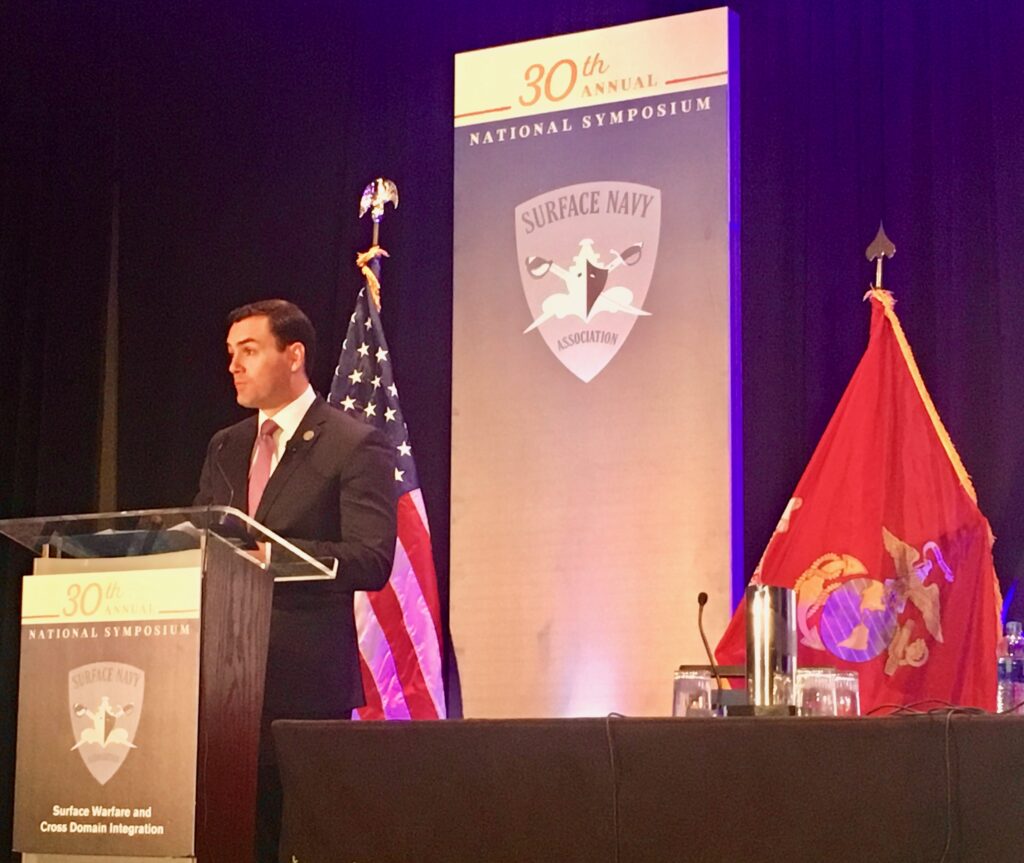 CRYSTAL CITY: When the Chief of Naval Operations told the Navy in March to close its mouth about readiness issues he was heading in the wrong direction, a Marine and member of the House Armed Services Committee told the Surface Navy Association this morning.

Rep. Mike Gallagher, who served two tours in Anbar Province before moving to the Intelligence Community, said the “highest levels of the Navy must change course and tell the story of seapower directly to the American people.”

To sharpen the point, Gallagher spoke about the self-satisfied leaders of the Royal Navy before the Battle of Jutland with Germany. Their navy had ruled the seas for centuries. They had built dreadnoughts and other ships thought to be state of the art run preparation for war with the Kaiser. They were wrong about some of their tactics and some of their technology. While they didn’t lose the battle, “the Royal Navy paid for this with about 6,000 lives,” Gallagher told the SNA audience. That must not happen to the American Navy.

Top Navy leaders argued after the CNO’s memo that they weren’t really trying to muzzle the service but, as my colleague Chris Cavas noted in a recent commentary, that’s what’s happened. Gallagher dismissed the idea that bad news — such as how unready the Navy’s ships and planes might be — should be suppressed or classified.

“Despite the old adage that ‘Loose Lips Sink Ships,’ non-existent strategic communications can sink entire navies,” he noted. Instead of hiding information, he told the Navy to be bold and take its story to the American people, who are, after all, the masters of Congress.

“We need more than the usual talking points, generic warnings of risk and the same comms policy that has left us seven years into the BCA (Budget Control Act), and more than three decades removed from the last naval recap with no end in sight,” Gallagher said.

He reminded SNA of a successful effort by the Navy, when we built the first fleet of ballistic missile subs (SSBNs). The Navy deployed a slogan, 41 For Freedom. I couldn’t find a poster or video mentioning that slogan but this video tells the adumbrated story of undersea warriors. It does not, of course, really do the job Gallagher would like to see done — engage the American public. Instead, it’s more of a recruiting poster. Just as the Pentagon now uses threats to drive development of requirements — as opposed to Donald Rumsfeld’s pursuit of “capabilities” — the Navy and other services may want to use videos of Chinese ships driving at US ships, Russian jets flying danger close to US planes etc.

“Explain how the future fleet will fight; how it will be different from the Navy fleet of today, and how it will meet our security needs,” Gallagher suggested. “Whatever we’re doing right now isn’t working.”

Gallagher wants the Navy to reach out to the public so that they pressure other members: “I want my colleagues to get letters about Navy issues just like they do on other issues.”