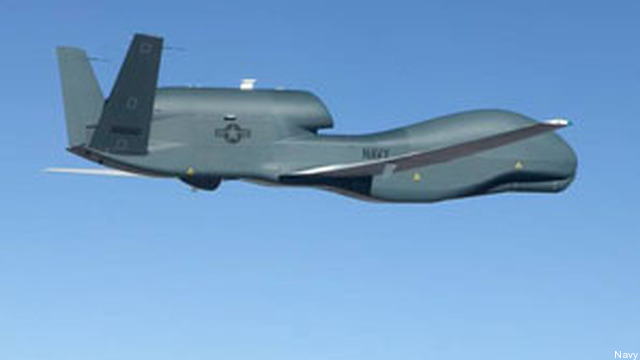 PATUXENT RIVER NAVAL AIR STATION: One of the Navy’s Global Hawks crashed and burned during testing about 22 miles from here Monday.

The U. S. Coast Guard responded and set up a perimeter around the wreckage of the drone, which the Navy calls BAMS-D, for Broad Area Maritime Surveillance-Demonstrator. The Navy said “cleanup of the site is underway [and] Navy officials are investigating the cause of the crash.” It’s important to note that BAMS-D is not exactly the same aircraft as the more advanced BAMS, which Northrop Grumman Corp. plans to unveil on Thursday in California. The airframe of the new BAMS has been considerably reinforced. Its sensors and much of its software are different. [ABOVE updated Monday at 8:45 pm.]

An impressively large hangar is rising here to house a familiar-looking, yet in some respects revolutionary, version of a drone Northrop Grumman Corp. is to unveil to the world this Thursday.

Northrop’s MQ-4C has the same sweeping, 130.9-foot wingspan and whale-nosed silhouette as the unmanned aircraft whose airframe it uses, the Air Force’s RQ-4 Global Hawk. The Navy’s version, however, incorporates many new features – including two radars with rare capabilities – and goes by the name BAMS, which stands for Broad Area Maritime Surveillance.

“The air vehicle is based on the RQ-4B, the Block 20, 30, 40 versions of Global Hawk, but that’s where the similarities end,” said Stephen Chadwick, who directs development of BAMS’s advanced technologies for the Naval Air Systems Command (NAVAIR). “The truck looks the same, but we made a lot of changes to meet the maritime mission.”

Despite its “M” designator, which stands for “multimission,” BAMS carries no weapons. It’s also very different from the Block 30 Global Hawk, an RQ-4 version the Air Force has proposed to scrap, saying the venerable U-2 — a manned spy plane scheduled for retirement — can do the Block 30’s intelligence, surveillance and reconnaissance (ISR) missions more cheaply. (Northrop and other Block 30 advocates dispute the Air Force’s cost calculations, and some suspect “white scarf syndrome” – an inherent reverence for manned aircraft over drones within a service run by pilots – is at work. Congress is also balking.)

The BAMS Northrop will roll out this week will use a set of sensors very different from Global Hawk. It is one of two the Navy is buying under a $1.16 billion System Development and Demonstration contract signed in 2008. Crews using a ground control station at Patuxent River will start flight testing those aircraft, plus a third Northrop is loaning the program, next year. The Navy plans to buy 68 BAMS in all.

Northrop says the Navy brass, VIPs and media who attend the company’s rollout of the first BAMS at its Palmdale, Calif., factory will “witness the dawn of the next centennial of naval aviation.” If BAMS works as planned when it goes into service — an event now scheduled for December 2015 — it will give naval commanders an unblinking God’s-eye view of the seas and littoral battlefields, something existing ISR aircraft – including Global Hawk — can’t do.

Along with BAMS’s flying range of more than 9,550 miles and endurance of more than 24 hours, the key to its dramatically expanded ISR capability is a new Active Electronically Scanned Array (AESA) radar Northrop has developed. By combining electronic scanning with mechanical rotation, this Multi-Function Active Sensor (MFAS) gives BAMS a 360-degree “field of regard,” meaning it can “see” everything below in any direction for hundreds of miles, rather than merely scanning toward one side or the other.

This 360-degree downward coverage also means BAMS can keep an eye on particular locations longer, giving its operators a better ability to track targets at sea, where waves and other activity can make small craft hard for radar to detect.

BAMS will also carry what the Navy calls a “Due Regard Radar,” another innovative sensor, and a device Chadwick calls a “baby step” toward “sense and avoid” capability for unmanned aircraft systems (UAS), something the military and the unmanned aircraft industry are working hard to develop. The Federal Aviation Administration, which under a new law has until Sept. 30, 2015, to start letting UAS fly in public airways routinely, says “sense and avoid” technology is essential for drones to satisfy a longstanding requirement that manned aircraft pilots be able to “see and avoid” other air traffic.

About the size of two car batteries, the Due Regard Radar, developed by ITT Exelis Inc., will scan the skies in front of BAMS as it flies, covering a field of regard 110 degrees to either side of the drone’s nose and 20 degrees up or down, to detect other aircraft six to nine miles out, depending on weather, and let the ground-based crew avoid potential conflicts, NAVAIR official Chadwick explained.

BAMS takes off and lands solely from land and is operated by a four-person crew – including one pilot – from a ground control station. The pilot uses mouse clicks on a computer screen rather than stick and rudder to fly the plane. When BAMS departs or arrives on U.S. territory or flies within 12 miles of the coast, the Navy will need a special FAA waiver to fly in public airspace called a Certificate of Authorization (COA), just as the Air Force does when its Global Hawks depart or arrive at their home bases in California and North Dakota. COAs typically require that a manned chase plane provide “see and avoid” capability for a UAS.

Once outside U.S. airspace, BAMS can cruise at altitudes well above most air lanes used by passenger jets and other manned aircraft. Unlike Global Hawk, however, BAMS will be able to descend to lower altitudes if necessary to more closely examine items of interest picked up by its ISR radar or daylight and infrared cameras.

“One of our requirements is to be able to operate in civil and international airspace,” Chadwick explained. The Due Regard Radar is simply “a relatively short-range air-to-air radar that’s meant to ensure safe separation with other air traffic,” he said, but “we’ll be the first airplane out there with one.” Other aircraft carry air-to-air radar, he noted, but safe separation isn’t their purpose.

The Navy is also putting a two-way radio on BAMS so its crew can talk to air traffic controllers the way manned aircraft pilots do, and it’s equipping the drone with standard safe separation and navigation and surveillance technologies manned aircraft use — TCAS (Traffic Collision Avoidance System) and ADS-B (Automatic Dependent Surveillance Broadcast).

Descending from high altitude also will require BAMS to fly through cold and damp air or clouds that cause icing, and at lower altitudes, the plane will run the risk of hitting birds. For those reasons, the Navy has had Northrop beef up the drone’s composite wing structurally and add de-icing gear to its leading edge.

“The airplane is just more robust,” said Walt Kreitler, Northrop’s director of business development for BAMS. “It’s the first UAV that I would happily fly in myself strapped to the back of it.”