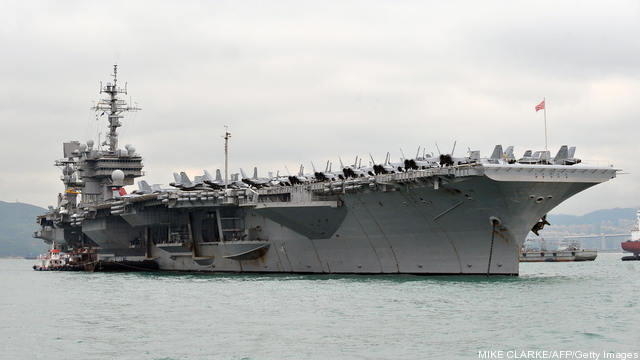 UPDATED Washington: A recent Navy decision to deactivate one of its aircraft carrier groups could be a sign of things to come for the service’s carrier fleet.


For more news and information on the swiftly-changing defense industry, please sign up for the Breaking Defense newsletter. You can also catch us on Twitter @BreakingDefense.
On Monday, Chief of Naval Operations Adm. Gary Roughead announced that the Navy’s Carrier Strike Group 9 will be reassigned from the USS Abraham Lincoln to the USS Ronald Reagan.

The reason for the group’s reassignment? To take the place of the recently deactivated Carrier Strike Group 7, stationed in San Diego, Calif. Taking CSG-7 out of the fleet leaves the Navy with only nine operational carrier strike groups.

A number that the sea service will likely be stuck with over the next decade, according Ray Pritchett, who runs the Information Dissemination blog that covers Navy issues closely.

According to Pritchett, the move is the Navy’s way of cutting costs early on as DoD prepares for lean funding years ahead. By cutting a carrier group, the Navy can clear all the operations and maintenance costs for that group off their books.

In addition, Pritchett points out, the Navy will also save service dollars in operations and maintenance for the air wings tied to CSG-7.

Even though the Navy will keep all 11 carriers in the fleet, which will drop to 10 ships once the USS Enterprise retires, it will likely maintain the nine carrier group construct for the long term.

Once the Enterprise is taken out of service, the Navy will likely just do the same thing it did with CSG-7, simply shifting the group (CSG-12) from the Enterprise to another carrier.

While the Navy will be able to shoulder the loss of the group, and still maintain a strategic presence worldwide, the message the move sends — particularly to the Hill — could be irreversible, according to one defense analyst.

If Navy operations do not suffer as a result of the cut and maintain the nine strike group construct long term, “it will be very hard to bring that [number] back up” if needed, said Travis Sharp, a defense budget analyst at the Center for a New American Security.

The move will also make the Navy’s case for the new Ford-class carrier harder to make, Sharp said, noting that the Navy could bolster its amphibious fleet as a way to fill that gap.