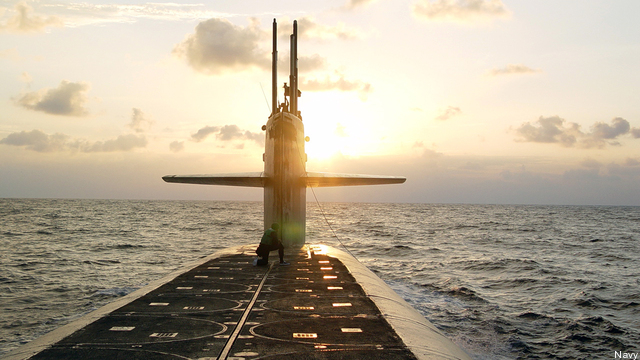 WASHINGTON: Right now, the Navy is designing the ballistic missile submarine that will provide 70 percent of the nation’s nuclear deterrent until 2080. Yet even as the service prepares to award research and development contracts this December, the submarine community is deeply worried that the rest of the military is neglecting the program — which has already had to make some painful trade-offs on schedule, numbers, and capability. And the service has not even started work on whatever nuclear missile the new sub will end up carrying for the latter half of its life.

The SSBN(X) program to replace the 1980s-vintage Ohio missile subs is a massive effort that few non-submariners talk about. “People are assuming it away,” said Rear Adm. Robert Thomas, a submarine officer who is now head of the strategic plans and policy section (J-5) on the Joint Staff.

Even Strategic Command, whose nuclear deterrence role is often overshadowed by its space and cyber missions, isn’t focused on the aging missile subs, Thomas told the audience at the Naval Submarine League’s annual conference: “I sit in the Tank and I listen to STRATCOM and frankly I don’t hear them talking about Ohio replacement. We need to do better missionary work.”

It’s easy to procrastinate because the timelines are so long. The first SSBN(X) will not deploy until 2031 — which is already two years later than the original plan and starts after four Ohios will have already retired. That means the missile submarine fleet will drop to just 10 subs for over a decade. Even when all the new subs are in service, the fleet will stand at only 12 missile submarines, compared to 14 today.

What’s less well known than the total numbers is how the Navy has cut back the new submarine’s capabilities, something the top brass were remarkably candid about at the conference, especially for a service known for its persistent silence.

“The Ohio replacement is not, is not a multi-mission platform,” program manager Capt. William Brougham said at the conference. “My team is designing Ohio replacement with the singular mission of being the nation’s [nuclear] strategic deterrent.”

The original vision for the SSBN(X) would have cost $7 billion a sub, a figure the Navy has brought down to $5.6 billion and hopes to reduce to $4.9 billion. To cut those costs, the Navy has cut capabilities across the board, but particularly for conventional combat against enemy subs and warships. According to official briefing slides, the revised design will have the “minimum [torpedo] capacity,” “minimum acoustic sensors,” and “reduced force protection features” in general, suited only for self-defense against enemy hunter-killer subs rather than for taking the offensive. (It will also have fewer and smaller launch tubes for nuclear missiles: 16 87-inch tubes instead of 20 97-inchers).

Some of the older warriors at the conference were skeptical. So what can SSBN(X) contribute to the fight, one asked, after it launches its ballistic missiles? The official Navy answer: They will remain focused on their strategic deterrent mission, not on conventional naval combat. The unspoken answer, of course, is that if things get bad enough that a sub has fired all its nuclear weapons, there won’t be much of a planet left to fight over anyway.

“This is not like an SSN [attack sub],” Rear Adm. Barry Bruner, director of submarine warfare, summed up for reporters at the conference. “It’s not a hunter-killer submarine.”

So the Ohio replacement’s job is not to hunt: It’s job is the traditional role of a boomer — to hide and to hope its onboard Armageddon is never unleashed. The question in some quarters is whether it can hide well enough.

The threat is not so much from traditional sonar as from “non-acoustic” systems, like magnetic detectors that can find the metal hull or satellites that can peer below the surface of the water. The Navy insists this is one area where they have not cut back, “not in terms of stealthiness and survivability,” said Bruner.

The SSBN(X) will be built to evolve with the threats, as past subs have, including the possibility of new sensors and new stealth coatings, added Rear Adm. David Johnson, the program executive officer for all Navy submarines. But “there are some things you have to build in from the start,” he said. “We haven’t compromised on the stealth.”

Given the long lifespan of the sub, it’s immensely difficult “to envision what the world’s going to be like in 2050 or 2060,” Bruner admitted. “There are technical breakthroughs all the time, but we’ve looked at trends in acoustic quieting and trends in non-acoustic performance, [and] we’re convinced that the Ohio replacement is the right ship to take us through the rest of this century.”

That extraordinary lifespan creates more complications than just forecasting anti-submarine threats. Most critical to the SSBN(X) mission is that the ballistic missile it will carry for the last half of its life hasn’t been invented yet.

When it enters service circa 2031, the Ohio replacement will carry the same Trident II D5 missile now standard on the Ohios, and as long as the D5s can do the job, said Bruner, “we’ll wait as long as we can before we tackle that next big bill.”

Major investment in the missile can only be put off so long, added Rear Adm. Terry Benedict, the Navy’s director of strategic systems. “We will need to do something with the current D5 design between now and 2080,” he said. “The system’s not going to last that long.”

“We’re not alone,” Benedict added. The Air Force’s mainstay Minuteman missile is aging, too, as is both service’s inventory of nuclear warheads — and there’s no plan on the books to replace any of them. The minimum would be perpetual upgrades and service-life extensions to keep old missiles in service, as is already being done for the workhorse B-52 bomber. The maximum would be all-new missiles for each service — or, perhaps, a single common missile for both.

Given budget constraints, “we may be forced to go to a revolutionary position of a joint ballistic missile,” Benedict declared. That’s a tremendous technical challenge. Submarine-launched missiles have to launch from underwater, something Air Force ICBMs do not. They have to fit not in roomy silos but in narrow tubes — especially since the Navy shrank the SSBN(X)’s tubes from 97 inch diameter to 84 inches to save costs. A new missile could be, at maximum, no larger than today’s D5.

Benedict assured the assembled submariners at the conference that the Navy would not compromise its unique requirements, and a common missile with the Air Force may not be practical. But the two services will definitely collaborate on research, development, and building components that can be used in both their arsenals, like gyroscopes and constituents for rocket fuel. (The Navy needs a unique fuel mix, but some of the ingredients can be shared with the Air Force and NASA).

Just before the Submarine League conference, Benedict said, he had visited Barksdale Air Force Base to talk missile cooperation with 20 Air Force generals and Senior Executive Service civilians. “The future is going to be much more intertwined between these two services,” Benedict said. “Collaboration and commonality is not an option, it is a requirement.”

The other crucial partner on ballistic missiles is the United Kingdom, whose only remaining nuclear weapons are on its Vanguard submarines. Ironically, the Navy has a better record of collaboration with the Brits than with America’s Air Force. The Royal Navy has relied on U.S.-designed missiles since the Polaris Sales Agreement was signed in 1963.

Even after the Americans delayed the SSBN(X) program by two years, they stuck to the original schedule to develop the missile compartment so it would be ready in time for the British could use the design in their own new missile submarine, which must enter service two years before the American sub.

So all together, the new submarine and its missiles are an extremely costly, complex, international effort with long lead times. Chief of Naval Operations Adm. Jonathan Greenert signed off on the requirements for SSBN(X) this August; the Capability Development Document, or CDD, must now pass muster before the all-service Joint Requirements Oversight Council in time for detailed design work to begin in 2017. Even though the first sub will not hit the water until 2028, once those requirements and designs are set, changing them is a recipe for disastrous cost overruns and delays, as the Navy found out with its first two Littoral Combat Ships.