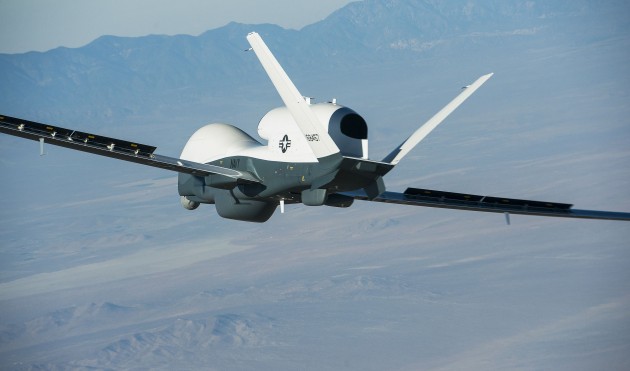 AUVSI: The Navy has halted work on what had seemed the Pentagon’s most promising system to help drones sense and avoid other aircraft.

The system, built by ITT Exelis, is “behind schedule” and the Navy has “made a decision to pause on the capability right now,” Navy Capt. Jim Hoke, program manager for the Triton drone built by Northrop Grumman said here this morning.  “We just need to take a hard look,” Hoke said, adding that the Navy might seek new bids for the system. “All options are on the table as we look forward.” The Exelis system was to be installed on the Triton but could — conceptually — have been used by a wide range of drones.

I understand that Northrop Grumman and the Navy are engaged in a complete review of the capability, one that is expected to finish in October. (Triton is the follow-on to BAMS-D.)

Building a sense and avoid system is crucial to not only the future of Triton — a version of Northrop’s Global Hawk drone — but to the entire unmanned aerial vehicle (UAV) industry. Without a sense and avoid capability, UAVs or Remotely Piloted Aircraft or whatever you want to call them, face an enormous obstacle. Civil aviation authorities will not allow them to fly in airspace frequented by civilian aircraft until systems are in place. Until that can be addressed, the market for drones will remain strictly limited to the military.

Capt. Hoke made clear in his briefing her at the Association for Unmanned Vehicle Systems International’s conference that the capability is crucial to operations, even in enormous swaths of relatively empty skies in the Pacific: “We fully understand how important this is.”

The other significant news out of Hoke’s briefing was that the US and Australia signed a Foreign Military Sales Letter of Agreement on August 1 that will allow information sharing between the two countries. I asked if a sale to Australia would entail an exemption from the Missile Technology Control Regime and he said it might. It’s too early to ask for an exemption, but the fact one may be required probably will expose the sale to more congressional oversight.

Hoke offered a host of program details ranging from the number of sailors needed to maintain and fly the plane– about 520 — to the current flying hour cost — below $10,000. That compares very favorably to most fighter aircraft such as the F/A-18 E/F or late model F-16s which can range between $24,000 and  $16,500, depending on whose figures you use. For comparison, the C-17 cargo plane costs roughly $12,000 per hour to operate, according to the Government Accountability Office.

There’s been much specultion about why the Navy buitl the Triton with hard points, where weapons can be anchored and released from. While Hoke made clear there is “no stated requirement” for weapons to be carried by Triton, he also said, “we put hard points on for a reason.” He noted that it’s very difficult to add hard points to a weapon once it’s built.