Navy May Be Force of Future, But Will Its Ships Sail

Washington: The head of the Navy, Adm. Gary Roughead, has offered a pretty compelling story line in the last few months, arguing that the next decade will belong to his service as the U.S. withdraws from its land wars and is forced to rely on a steady global presence deliverable only by ship.

The Navy will grow — eventually — to 313 ships (or 325 for a while, according to Congressional Budget Office and CRS estimates) from its current fleet of 285. And no one thinks the service will downgrade its coverage of the Western Pacific, in particular, as China pumps money into its naval forces. But there is one big fat problem with all this, as became clear during a House Armed Services hearing yesterday afternoon: the current Navy is having trouble handling its current load.

“We’re not good to go right now,” Vice Adm. Kevin McCoy, head of Naval Sea Systems Command, told the HASC readiness subcommittee. And he told the committee that things may well get worse in the near term before they get better.

His colleague, Vice Adm. William Burke, deputy chief of naval operation for readiness, conceded under questioning that the last decade of high operational tempo does worry the service. The biggest concern: “potential overuse of our platforms.” Simply put, the Navy’s ships may be wearing out much more quickly than expected because they are being used much more than originally planned.

But, as almost happens with readiness questions, there were precious few details from anyone at the hearing, although at one point Rep. Randy Forbes, subcommittee chairman, seemed to indicate he had read a classified report which detailed Navy problems.

Forbes did offer a few details during the hearing:

“Only 45 percent of deployed Navy aircraft are fully combat ready,” he said.

In surface ship inspections over the last two years, the Navy found “more than 1 in 5 ships less than satisfactory or unfit for combat,” Forbes said.

In an interview this afternoon, Forbes said what really worried him was that the Navy had said it could afford its shipbuilding plan with the help of “a sharp spike” in funding between 2013 and 2015. But it now looks as if spending may dip in that period, leaving the service with fewer new ships, more older ones and even lower readiness rates.

There was one striking moment during yesterday’s hearing that could have enormous impact on readiness rates. The admirals were asked about rumors that the Navy may push out by several years work on the next carrier and possibly drop plans to build a third new carrier. Normally, such a suggestion would bring vehement denials or at least comments to the effect that it’s pre-decisional, congressman, and we just can’t say. Instead, a “dead silence” was heard, as Forbes put it, about the fate of the carrier the Navy just announced would be named after President Kennedy. My Defense News colleague, Chris Cavas, broke the news of the possible Navy move. He said the service is “seriously considering a delay of two years before buying the most expensive ship the service needs to order, the aircraft carrier John F. Kennedy (CVN 79).”

If that silence was affirmation, this would mark one of the most significant budget decisions by the Navy in decades. But Cavas characterized the debate in the Pentagon this way: “Sources said at least one faction within the administration supports the move, which could save about $10 billion in the ship’s purchase price.

“Navy leaders, however, are said to strongly oppose that proposal, which appears – at the moment – unlikely.”

Given the general paucity of details about the readiness issues, I called Jan Van Tol, Navy expert at Washington’s respected Center for Strategic and Budgetary Assessment to see if we could winnow some out.

First off, he said that the Navy has not had to forgo “major commitments” since LPD-17, the San Antonio, was unable to deploy last year. This troubled class of ships has had more than its fair share of problems, but the San Antonio’s delays set alarm bills ringing in the Navy and on Capitol Hill.

Part of the wider Navy problem, Van Tol said, is that “ship readiness accounts are being robbed to pay other accounts.” However, i 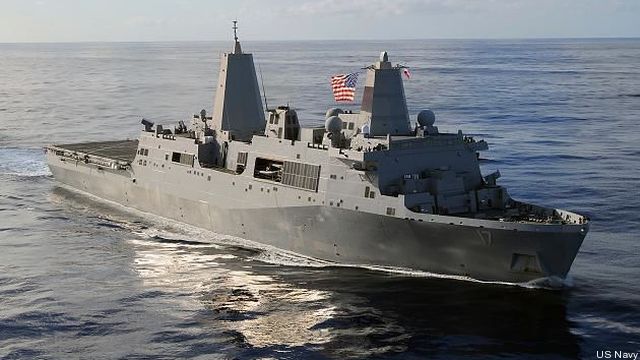 t is extremely difficult to detail where the money is flowing because of the nature of operations and maintenance accounts.

One well-informed naval expert I spoke with said O and M accounts are so fluid and difficult to track in real time that serious readiness problems may arise just when money has been moved elsewhere. Has it happened lately? Who knows. At least the Navy was honest enough to admit it already faces serious readiness problems. But the longer-term issue remains: will the Navy have enough money to build ships and to maintain them or will it have to manage risk so carefully that U.S. interests suffer, especially in the Pacific.