Navy Mine War Game ‘Not About Iran,’ Officially; Biggest Mine Exercise ‘Ever’ 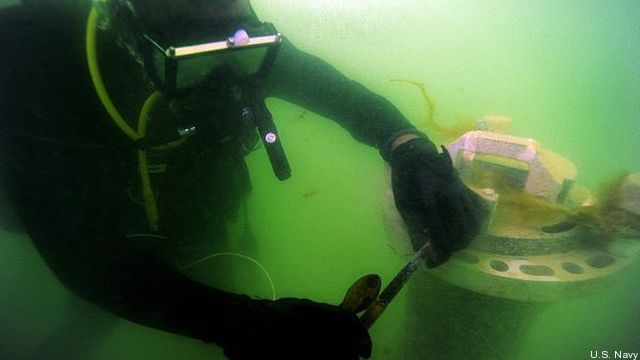 CORRECTED: Fixes Number of Minesweepers in US Ports 9:35 am 10/1/2012
Officially, despite rising tensions with Tehran, the enemy in in the international naval wargames that kicked off in the Gulf this week is not, repeat not, Iran: It’s radical environmentalists. Very, very well-armed environmentalists.

Against this fictional Greenpeace gone rogue are set the ships, aircraft, and divers from more than 20 nations, including an unprecedented concentration of Navy minesweepers, eight of which are now in the Gulf — a surge the Navy told Breaking Defense it cannot sustain long into 2013.

“The scenario is that it’s an environmentally focused group that has been known to employ violence,” said Rear Adm. Kenneth Perry, the vice-chief of the Naval Mine & Anti-Submarine Warfare Command (NMAWC), who’s come out to Bahrain to oversee the International Mine Counter-Measures Exercise (IMCMEX), “and they have the resourcing, the visibility, the access to procure either on the grey market or the black market ‘improvised underwater explosives,’ or mines.”

“It’s not about Iran,” said a somewhat weary Navy spokesman in a follow-up call.

The simulated mines will include not just home-made devices but some of the “more advanced types” on the global market, Perry explained, similar to the Italian MANTA mines featured, incidentally, in the Iranian arsenal. The goal is to test the participating forces to the fullest, rather than be limited by what a non-state organization might realistically be expected to acquire.

“This type of violent extremist group may not have those capabilities necessarily” [in real life], Perry acknowledged, “but…we want to exercise the full range of capabilities.”

In parts of the wargames, Perry said, the international task force trying to clear the mines will even be menaced by simulated attacks from so-called “Fast Attack Craft,” the kind of lightly armed, fast-moving boats that the Iranian Revolutionary Guard Corps happens to employ. The admiral declined to say whether the adversaries will also employ shore-based anti-ship cruise missiles, another Iranian capability.

What the Navy wants to emphasize is who’s coming together in the exercise, not who they’re against. With more than 20 nations contributing forces — ships, aircraft, divers — and at least 10 more sending staff officers or observers, “it’s far and away the biggest MCM [mine-countermeasures] exercise that we’ve been involved with in this theater,” Perry said. “Ever. Ever.”

Such international exercises are a well-established tradition in the Atlantic and Pacific, but not so in the waters of the Middle East, where mutual suspicions mean many nations prefer to engage one-on-one with the United States, bilaterally, instead of multilaterally with both the US and their neighbors. Even now, many of the participants are keeping quiet about their involvement: Perry and his staff could only officially confirm the involvement of the US itself, Britain, Japan, France, New Zealand, Estonia, and two Mideastern countries, Jordan and Yemen.

Not helping the atmospherics, either, is widespread Muslim outrage over a YouTube trailer mocking the Prophet Mohammed and the ongoing anti-US riots that resulted. The deaths of US diplomats in Libya in particular have turned American attention — and pressure — off of Iran.

In this context, half the battle is just getting so many countries to participate at all. “One of the aims of the exercise is to demonstrate the ability to coordinate and organize MCM operations with international partners,” Perry said. With so many US and foreign participants, he’s been able to split the exercise up into three task forces in widely separated areas of ocean: the Gulf of Oman, the Gulf of Aden, and inside the Gulf itself — though they are pointedly staying out of the Strait of Hormuz itself, which is too heavily trafficked by civilian ships.

The US contingent in the exercise is by far the largest, leveraging a build-up in the Gulf of assets intended to keep the Strait of Hormuz open against any action by Iran. That flotilla includes divers trained to handle live mines underwater; a brand-new mine-hunting mini-sub called the Mark 18 Unmanned Underwater Vehicle; the venerable MH-53E Sea Dragon mine-hunting helicopter; a converted amphibious ship, the USS Ponce, now serving as a floating hub for other craft (formally, an “Afloat Forward Staging Base”); and eight Avenger-class minesweepers, of which six are in the exercise.

The Avengers are a weak point, though. The Navy doubled its minesweeper force in the Gulf this summer, sending four Avengers from the West Coast to join the four already in Bahrain, but they cannot sustain all eight in the Gulf indefinitely. There are now only two minesweepers left in US home waters on which Navy sailors can train, which means there will be not enough personnel ready to take over when the crews currently in the Gulf are supposed to come home — which would be no later than January, given traditional six-month rotations. [corrected: an earlier version of this story wrongly stated there were no minesweepers left in U.S. ports.]

“Those may be extended,” Perry said. “[But] these are small ships, these are some of the smallest crews in our Navy fleet, about eighty crew members, [and] mine warfare is a tough line of work…. The leadership is very focused on making sure that we take care of the crews while meeting the operational needs.” How they’ll strike that balance without either exhausting the small cadre of minesweeper sailors or leaving the Gulf underprotected, however, is still being studied.

One stopgap solution is deploying more Mark 18 UUVs and SeaFox mine-killing “neutralizers” from helicopters and even inflatable boats, Deputy Chief of Naval Operations William Burke said last week at the National Defense Industrial Association’s annual expeditionary warfare conference in Panama City, Florida. Those assets could add enough counter-mine capability to bring two of the Avengers home, Burke said. “I need to get some of those ships back in California,” he told reporters last week. “I don’t have the ones back home able to train.”

That the Navy is so short of minesweepers is another sign of how long the fleet has neglected mine warfare capability. The Navy is currently testing mine-countermeasures equipment on its Littoral Combat Ships, which will ultimately replace the much slower and more vulnerable Avengers — but the LCS minesweeping kit won’t be ready until after 2014.