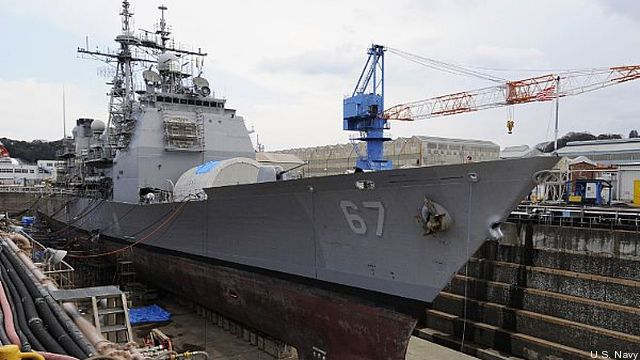 WASHINGTON: The Navy’s made a convincing case that many of its ships’ hulls can last another five to 17 years and get to a 355-ship fleet much faster than expected, but a Hill staffer says Congress is still waiting for the Navy’s plan to ensure those old hulls have up-to-date weapons.

One particularly intriguing possibility that’s not in the Navy’s current budget request, the congressional staffer says, is an electronics upgrade to Aegis cruisers and destroyers that would increase their radar discrimination six-fold.

When the Navy lists its targets to extend the service lives of various classes, “that makes sense to us,” the staffer told me in an interview. “The hull itself and the mechanical and electrical systems (collectively, HME) are all good for going to this longer service life.”

So why does the Hill have reservations about the Navy’s plan? “What’s missing at this point is what the Navy’s modernization strategy is,” the staffer said. The ships in question have enough margin for growth — physical space, volume, power and cooling, a stable center of gravity — that they could accommodate upgrades, but should they? How much does it cost to keep upgrading old ships, which can require complex retrofitting? How does the cost:benefit ratio of such upgrades compare to spending the same amount on new vessels that can be designed to carry the latest systems rather than wedging them in post-hoc? The Navy’s plan is appealing “philosophically,” the staffer said, , “but the devil’s in the details.”

For example, the Marine Corps and the Navy have long complained that amphibious ships have outdated information technology that’s often incompatible with the command and control (C2) systems the Marines bring onboard. While the services have worked to fix that problem, now the Marines are finding their shiny new F-35B Joint Strike Fighter — described by the Air Force Chief of Staff as “a computer that happens to fly” — are too sophisticated for the amphibious ships to handle. That’s a fixable issue, but fixing it ain’t free.

“The hull life on the amphibs is fine,” the staffer said. “The C2 suite needs to be significantly modified.”

Even an upgraded amphib, however, is significantly simpler than a frontline warship like a destroyer — and there are a lot more destroyers than amphibs. If the Navy’s plan is to have a chance of working, it needs to keep the destroyers updated. 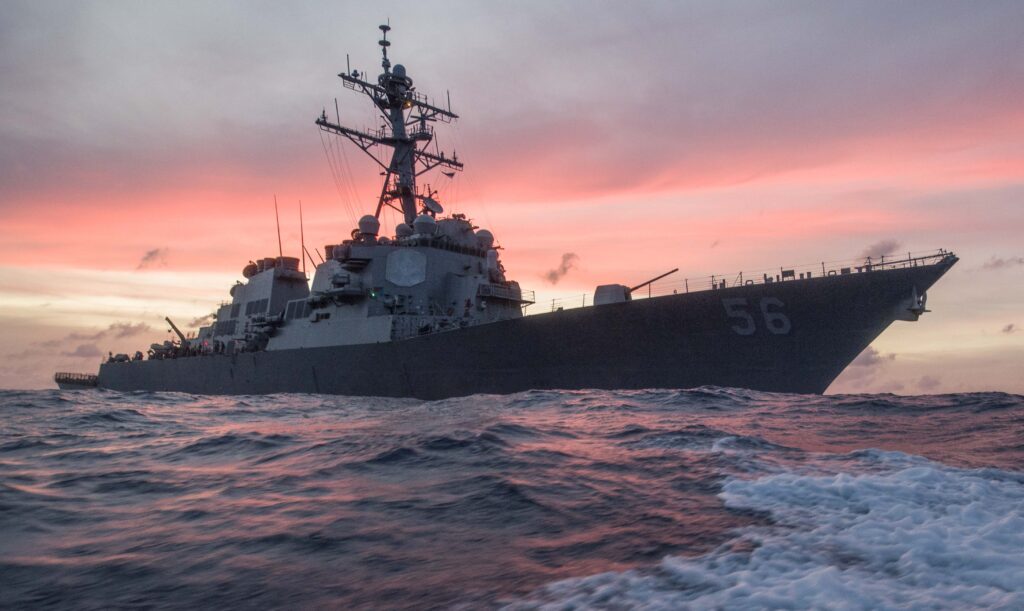 The Shield of the Fleet

The most important and most complex combat system in the Navy, by far, is Aegis. Its history is vivid proof the Navy can and does keep systems updated for decades.

Named after the mythical shield of Athena, Aegis tracks incoming enemy missiles and aircraft, matches the threats to interceptor missiles in the ship’s Vertical Launch System (VLS), and shoots them down — potentially without any human intervention if put in fully automatic mode. Aegis is currently installed on 86 ships: 22 aging Ticonderoga cruisers, which Congress forced a reluctant Navy to modernize instead of retire, and 84 (and counting) Arleigh Burke destroyers, with two new Burkes being built a year.

Aegis is also 45 years old: The first test ship got fitted with the prototype in 1973, the first operational ship was commissioned in 1983. The Navy’s repeatedly upgraded it over time, with Baseline 9 currently in the fleet. Baseline 10 in development for the latest “Flight III” Arleigh Burke destroyers, which will have a new, larger, and much more powerful radar called AMDR (Air & Missile Defense Radar), which has 30 times the discrimination of the current SPY-1.

But what about the other 74 destroyers currently in service or under construction, not to mention the even older cruisers? They can’t accommodate a full-up AMDR. But, the staffer told me, there are two intriguing possibilities:

None of this is in the Navy budget, however, the Hill staffer said — yet. 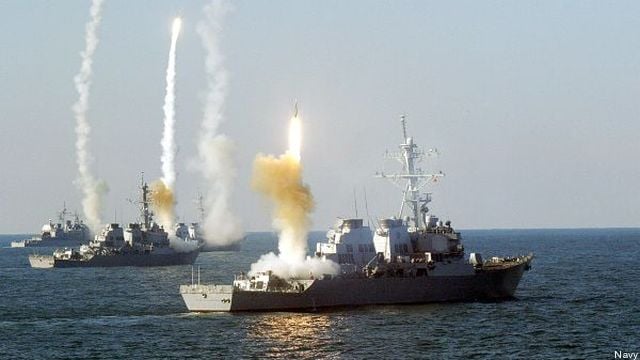 What the Navy is already doing, however, is a vigorous program of upgrades to the Aegis software and the hardware it runs on. Moore’s Law doesn’t just make the computers faster, allowing each generation of Aegis to take up less space, weight, power, and cooling: It also allows the whole upgrade cycle to run faster.

Traditionally, the Navy rolled out major Aegis upgrades about every four years. With lives and victories potentially at stake, each iteration of the software required painstaking testing, including pulling a warship out of service for as much as a year.

Now, however, computing power’s so cheap and compact that an operational ship can carry two Aegis systems at once: the regular version, with proven software, and a test version, a “virtual twin,” running in parallel. The virtual twin, since its software is still in testing, can’t actually send target data to the command center or launch orders to the missiles, but it takes in the same real-world radar data as the regular system. That way the Navy can put the test software through a rigorous workout and see exactly when, where, and why it acts differently from the proven system, but the inevitable glitches in the twin don’t affect real-world operations.

“Earlier this year, we did our first Aegis twin pilot, (on) Arleigh Burke,” said Capt. Todd Boehm, the Navy’s Aegis program manager, at this week’s American Society of Naval Engineers (ASNE) conference. The next test run of the twin concept will start next month on the newly commissioned USS Johnson, DDG-114. When fully in play, Boehm said, virtual twins will cut “a year, a year and a half” out of the testing process.

Most of the slowdowns in the upgrade process are self-imposed, added Boehm’s boss, Rear Adm. Douglas Small. While the Navy can’t cut corners and must continue its high standard of “incredibly rigorous systems evaluation,” he told the ASNE conference, “there are no technological barriers to going at the speeds we’re talking about.”

It might even be possible to get a little more life out of a class not on the list, the Nimitz-class nuclear-powered supercarriers. (All other surface ships are non-nuclear, making engineering much simpler). While the Nimitz, oldest of her class, is scheduled for decommissioning in 2023, the staffer said it’s possible there’s more life in her nuclear core. That’s possible in part, ironically, because ship maintenance and overhaul work now goes consistently over schedule, and a carrier in overhaul doesn’t run its reactor at full power. The House version of the National Defense Authorization Act would mandate a study of the issue. However, it would probably only be months of extra time, not years, but that could be enough to get another deployment out of each carrier.