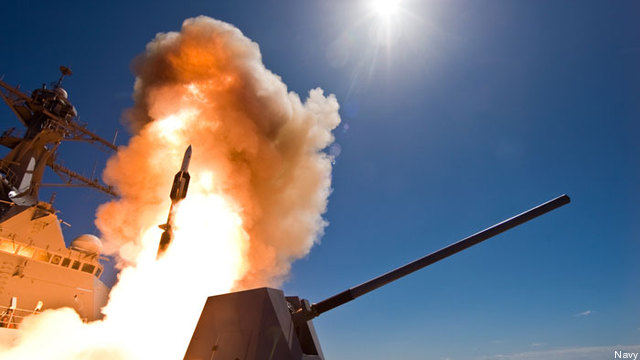 WASHINGTON: Hitting a bullet with a bullet at the speed of sound — well, nowadays, that’s no big deal. Hitting a supersonic target that you can’t actually see — okay, now that’s impressive.

This morning Raytheon announced its Standard Missile-6 destroyed  “a medium-range supersonic target” in a June 10 test at White Sands Missile Range in New Mexico. But the SM-6 has hit supersonic targets before.This time the launcher fired the missile at a target “over the horizon,” i.e. one its own sensors couldn’t see. Instead it had to rely on data feeds from distant sensors which could track the target.

So the system really being tested wasn’t the missile but the invisible electronic network moving the data from sensor to shooter. That’s the awkwardly named Naval Integrated Fire Control Counter-Air, mercifully abbreviated NIFC-CA, intended to link Navy ships and aircraft into a single anti-aircraft and missile defense system. This was the first time NIFC-CA has engaged a supersonic target.

Why’s that important? The faster the bad guy’s going, the less time you have between the instant he comes over the horizon and the instant he hits you. From the highest point on a Navy Aegis ship, the horizon’s about 20 miles away. Advanced Russian and Chinese anti-ship cruise missiles, moving at Mach 2.5, cover that distance in about ten seconds.

That means you really, really want to see that missile coming and start trying to shoot it down before it comes over the horizon. That, in turn, means shooting at it before your own sensors can see it, which means getting other people’s sensor data from something like NIFC-CA.