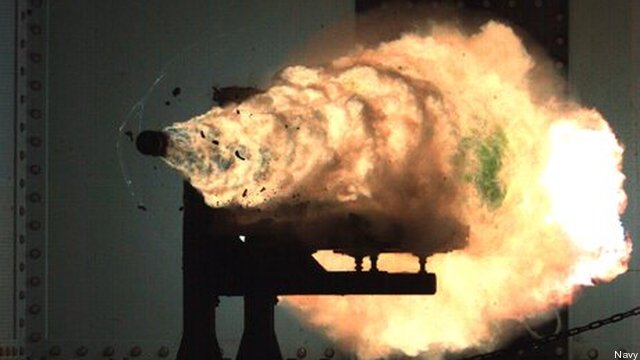 WASHINGTON: The Navy’s weapon of the future will take one step closer to reality this month, as service officials prepare to test fire the first industry-built prototype of its fabled Railgun.

ONR testers will fire off a BAE Systems-built version of the weapon next week at the Navy’s surface warfare center in Dahlgren, VA., according to Roger Ellis, head of the Railgun program at the Office of Naval Research’s Air Warfare and Weapons department. Another rail gun variant built by defense firm General Atomics will arrive at Dahlgren sometime in April for testing, a service spokesman said. There is no word when Raytheon is expected to begin testing their rail gun variant. The Navy awarded the company a $10 million deal late last month to begin prototype work on the next-generation weapon. Live fire testing for both industry prototypes is scheduled to last for two months, Ellis said.

The Railgun is designed to shoot heavy artillery rounds usually fired by the batteries of heavy guns aboard U.S. warships. The difference is that instead of gunpowder, these rounds are propelled through a series of electromagnets lining the inside of the gun’s barrel. The charge from the electromagnets propel the round — likely the standard 155mm shell fielded by American destroyers — through the barrel at upwards of Mach 7, once fully developed.

The Navy successfully completed live-fire tests of an early version of the weapon last December. During that test shot, the weapon was able to generate 33 megajoules of energy, service officials said at the time. That is enough energy to fire a projectile just over 110 nautical miles. During next week’s test, ONR officials will look to fire rounds between 4,500 to 5,600 mph, Ellis said. He did not comment on how many rounds would be fired from either the BAE or General Atomics guns. But Ellis did note ONR testers planned to shoot “sufficient shots to verify barrel structural integrity and life.”

Since the Railgun uses electromagnetic energy to fire, it theoretically could save the Navy millions in maintenance costs for the weapon. Service leaders could also save millions in ammunition costs, since it will not have to buy traditional rounds for the gun. These savings could be monumental as the Navy and the rest of DoD cope with looming budget cuts beginning this fiscal year.