PENTAGON: Consider 35 pounds of metal moving at Mach 5.8. Ten shots per minute. 1,000 shots before the barrel wears out under the enormous pressures. That’s the devastating firepower the Navy railgun program aims to deliver in the next two years, and they’re well on their way.

“We continue to make great technical progress,” said Office of Naval Research program manager Tom Boucher. Boucher and an aide briefed me in the blazing hot courtyard of the Pentagon, which was hosting the annual DoD Lab Day — a kind of military-grade science fair. 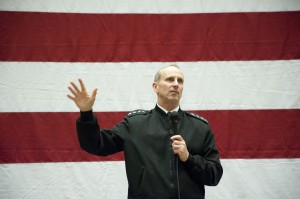 Three years ago, then-Chief of Naval Operations Jonathan Greenert declared that railguns — which fire projectiles with electromagnetic pulses rather than gunpowder — had come so close to battle-ready that he wanted to test-fire one at sea. Since then the Navy has changed course, deciding that permanent land-based test sites would provide more and better data for fewer dollars than an ad hoc installation aboard a repurposed fast transport (variously known as JHSV or EFP). So on November 17, along the Potomac River at the Naval Surface Warfare Center in Dahlgren, Va., a new 32-megajoule railgun built by BAE Systems opened fire for the first time. (See video above). A second railgun is being set up at the Army’s White Sands Missile Range in the New Mexico desert, where there’s enough wide-open space to fire the weapon at its maximum range of more than a hundred nautical miles.

While White Sands tests the long-range performance of the projectile, Dahlgren will work on the weapon itself. Previous test weapons were like medieval bombards, firing just a few times per day. The Dahlgren team is now making multiple shots per hour as they work out the bugs, and by the end of the year they expect to reach the goal of 10 shots per minute. For comparison, a standard 5-inch deck gun can fire 20 rounds a minute, albeit only for a single minute before its quick-reload drum runs empty; the 16-inch guns on battleships fired about twice a minute.

Once they’ve reached the 10-round a minute rate, Dahlgren will switch focus to barrel life. A decade ago, experimental railguns often wore out their barrel with a single shot. With new materials better able to endure the intense stresses, the barrels on the current test weapons can last for hundreds of shots before requiring replacement — roughly how long a battleship’s 16″ barrels lasted back in World War II. The goal is a barrel that lasts 1,000 rounds.

The next big question — beyond the scope of the current test program — is power. The current railguns fire a 16 kg slug at 2,000 meters per second (roughly, 35 lbs at Mach 5.8), which takes 32 megajoules of energy per shot. Pumping out 10 such shots a minute requires 20 megawatts of power. Unfortunately, the only ships in today’s Navy that have sufficient energy are nuclear-powered aircraft carriers — of which there are just 11 in service — and Zumwalt-class destroyers — just three.

Firing railguns off anything else would require expedients. One model might be Dahlgren itself, where the Navy has literally wired up several 20-foot CONEX containers full of batteries, good for fifty shots: Such an ad hoc power source could conceivably go in a cargo hold. Retired Navy strategist Bryan Clark has proposed just such a solution, converting EFP transports into expedient railgun platforms to shoot down incoming missiles. 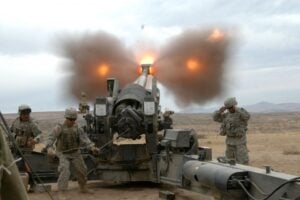 In the nearer term, however, not only the Navy but also the Army want to capture some of the benefits of railgun technology in their current cannon. Sponsored by the Pentagon’s Strategic Capabilities Office, both services are testing Hyper-Velocity Projectiles designed for the railgun from existing 5″ inch naval guns and 155 mm (6″) howitzers. (The HVP itself is the same, but is wrapped in a different fly-away package called a sabot). Using gunpowder rather than electromagnetic impulses means the muzzle velocity is lower, which in turn means the projectile can’t escape the atmosphere to fly without friction over vast distances. Even so the 5″ gun firing HVP more than doubles its normal range, to about 30 nautical miles. (The Navy officials present didn’t have the latest figures on the Army tests).

Gunpowder-propelled HVP is not enough to replace the railgun in all aspects. The electromagnetically-launched weapon not only travels further but hits harder, rendering a high-explosive warhead unnecessary for many targets. But for crucial missions such as shooting down incoming cruise missiles, conventional cannon firing Hyper-Velocity Projectiles can play a crucial role as a second line of defense around 30 nautical miles out. Beyond that, out to 100 miles, the giant railguns can take over with crushing force.