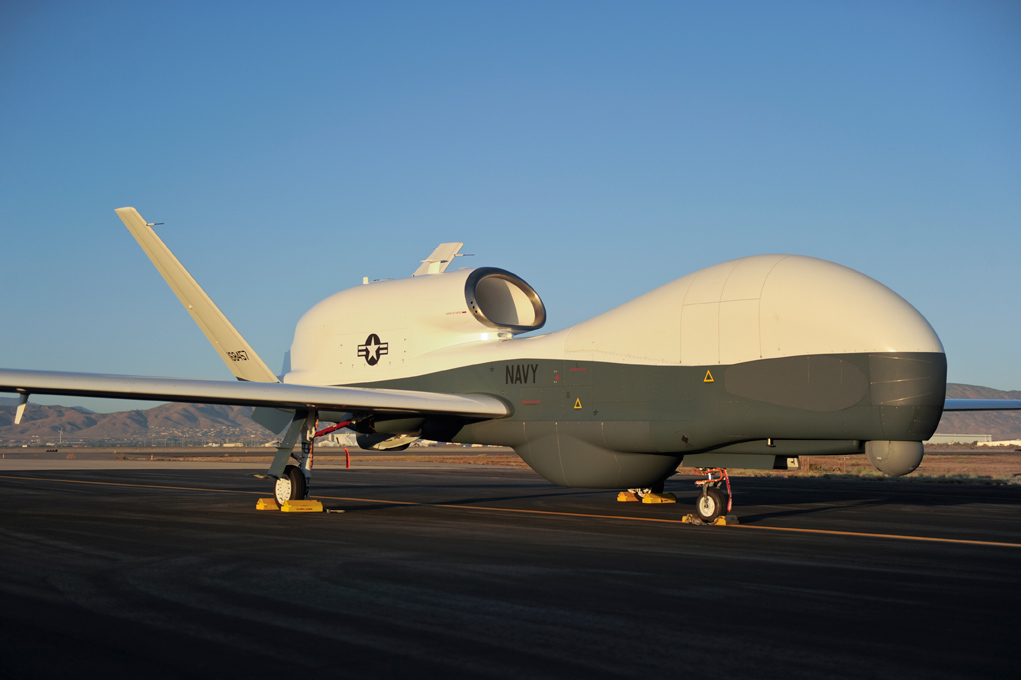 The U.S. Navy is preparing to deploy a new generation of high-altitude drones to the Pacific this summer, sending two MQ-4C Tritons to Guam. The coming deployment comes at a time of heightened military tensions with China, which is also busily shipping surveillance and electronic warfare equipment to several of its controversial outposts in the South China Sea.

The deployment of the 131-foot-wingspan drone will give the Navy new new set of eyes in the vast reaches of the western Pacific, intensifying the building race between Washington and Beijing to push more ships, aircraft, and radar systems into the region. Late last month, a 40-ship Chinese flotilla, including its only native-built aircraft carrier, sailed into the South China Sea.

The Northrop Grumman-made aircraft, a variant of the Air Force’s Global Hawk, will deploy initially with electro-optical sensors capable of tracking maritime targets from as high as 60,000 feet. It will push that data back to ground stations at Naval Station Mayport, Fla., or Naval Air Station Whidbey Island. Wash., or to nearby P-8A Poseidon submarine hunters.

“One of the main reasons that the Navy decided to fund Triton was to have that teaming arrangement, to be able to communicate back and forth between P-8s and the Triton aircraft,” Capt. Dan Mackin, the Navy’s Triton program manager, told reporters at the Navy League’s Sea-Air-Space Exposition.

The deployment will also allow the P-8s to focus more on the submarine hunting aspect of tis mission, leaving other ISR missions to the drones.

“You want to give the P-8 the ability to perform the anti-submarine warfare mission while tying to high-altitude ISR mission,” Mackin said. “One of the things we’ll do is pass information back and forth between the two aircraft and the situational awareness of the fleet will be enhanced. Both aircraft have the ability to do chat, so both crews will be able to communicate back and forth.”

The Navy’s announcement came the same day the Wall Street Journal reported that China had installed electronic jamming equipment on two of its militarized outposts in the Spratly Islands, giving Beijing a dangerous tool in one of the world’s busiest waterways, and further solidifying its influence over an area well outside China’s territorial waters. China had promised never to militarize the islands and has clearly violated that pledge in many different ways.

Once the Triton reaches its initial operational capability in 2021, the Navy plans to add two additional aircraft to the Guam orbit. Those four aircraft will then make up one 24-hour, seven-day orbit, Mackin said.

The Triton  can fly more than 24 hours at a time, with an operational range of 8,200 nautical miles.

The first Triton squadron — Unmanned Patrol Squadron 19 — will arrive in Guam this summer, with several other orbits for the system are planned for Sigonella, Italy; an unnamed site in the Middle East; Mayport, Florida; and Whidbey Island, Washington. Northrop Grumman’s schedule of producing about three Tritons a year will govern the deployment schedules for the additional sites. Eventually, the Middle East deployment will replace the Navy’s RQ-4A Global Hawks in the region.