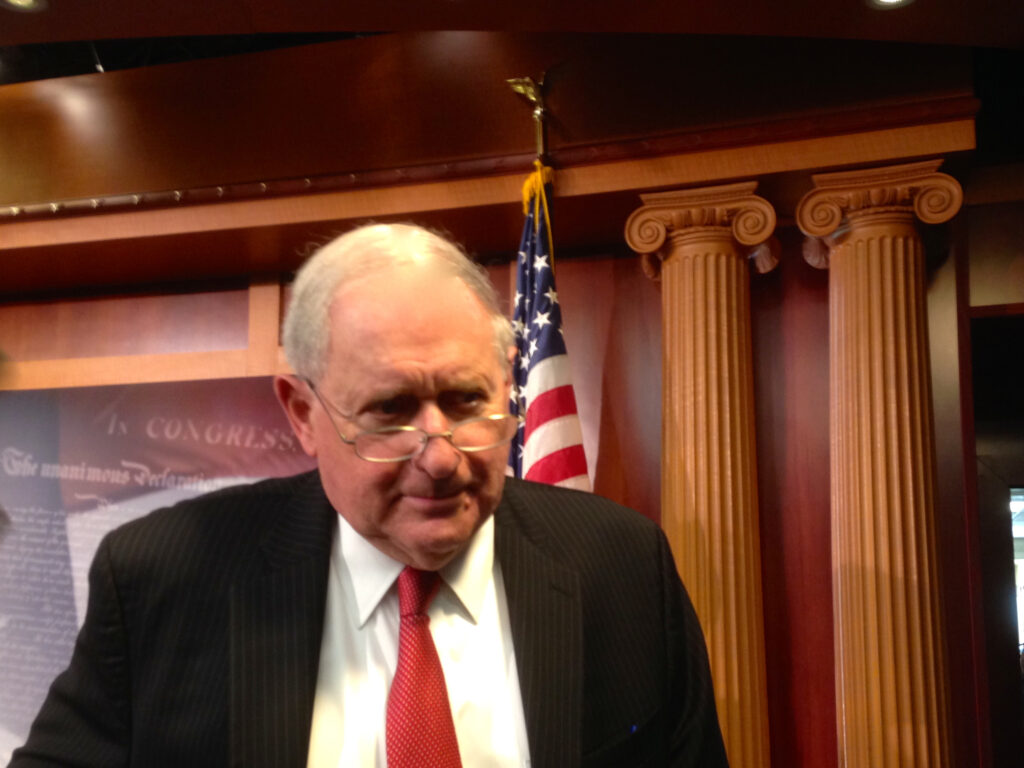 THE CAPITOL: “We do emphasize readiness,” Sen. Carl Levin told me. “I for one would rather have a smaller force that is ready than a bigger force that is less ready.” With those words — his parting shot as I hounded him through the Capitol’s marble halls after his official press conference yesterday on the annual defense bill — the Democratic chairman of the Senate Armed Services Committee drew a clear battle line with the Republican-controlled House, which cut “operations and maintenance” funds by $1.2 billion to fund a larger force with more generous personnel benefits.

Democrats like the acerbic Rep. Adam Smith say they’re choosing readiness, responsibility, and realism over GOP wishful thinking that will lead to a large but unready “hollow force.” Republicans counter that they’re choosing to fight on in hope of larger defense budgets rather than just resigning themselves to the automatic spending cuts known as sequestration.

“It is a difference of approach: Do you preserve options now for future budgetary improvements, or do you just assume the budget’s not going to get better?” said Rep. Mac Thornberry, vice-chairman of the House Armed Services Committee. We spoke Thursday just hours after the full House had approved HASC’s version of the National Defense Authorization Act for fiscal year 2015.

“The judgment in this bill is to preserve options. You’re right if you do it too long, then the risk is you hollow out the force,” Thornberry told me. “[But] if you bite the bullet now, you may well lose the capability to get it back in the future[:] You may lose a production facility, you may lose the workers, you may lose things that you can’t recover.”

“Preserving options” is hardly how HASC’s top Democrat, Rep. Adam Smith, describes the House Republican plan: “We are hoping that somehow we magically won’t have to make tough decisions,” he said in a public statement Thursday. “We are hoping that the money will appear.” While Smith voted for the HASC version of the NDAA, preserving the committee’s tradition of unanimity, he said in his statement that “I only voted in favor because we still have time to fix the bill… in conference with the Senate.”

That’s where Carl Levin comes in. While the SASC chairman declined to comment on any differences with the House — “I don’t know what’s in the House bill,” he told me, since the final version had just passed — he did publicly denounce the idea of reducing readiness funds.

“We did not cut the president’s budget on readiness and on O & M. We think it’s a mistake,” Levin said at his press conference. “That’s where we’ve been hit hard [already], is on readiness, and we’re not going to add to that, taking the risk that maybe in the future we’ll be able to make up for those readiness losses. That was a risk that was taken in the last year, the last two years, and it turns out we didn’t have the funds to make up the losses.”

In stark contract, the House NDAA cuts O&M funding by $1.2 billion — through easily achievable efficiencies in service contracting and other non-critical accounts, HASC staff argue —  and spent the money on a larger force with more generous benefits. HASC keeps the cruisers operational, forbids prep work on the Apache transfers, and restores the pay raise to 1.8 percent.

There are key areas of agreement. Both bills forbid retiring A-10 “Warthog” ground-attack planes or the aircraft carrier George Washington; both reject major changes to military health benefits; both create an independent commission to review the politically charged balance between the regular Army and the National Guard. But the differences are not mere details.

What’s more, the battle ahead in this year’s conference on the NDAA for 2015 may a warm-up for something apocalyptic next year over 2016. Fiscal ’15 is almost easy in comparison, because December’s Bipartisan Budget Act essentially suspended the sequester cuts — but only for two years: Sequestration returns in full force in fiscal year 2016. Many of the administration’s proposed cuts for 2015 are mainly aimed at saving money over the long run.

In essence, Democrats like Smith say the Pentagon needs to put the brakes on spending in 2015 so it doesn’t hit a brick wall in 2016. Republicans like Thornberry still think there’s time to tear down that wall.

“I understand the argument that at some point you have to fish or cut bait,” Thornberry told me, “but the thought behind this bill is let’s keep the bait in the water a little while longer and hope and work towards getting some relief on the budget front.”

“Obviously the election outcome in November could influence this,” the Texas Republican added. “You have a different sort of Senate, then maybe’s there’s a better chance of some more defense spending.”

How about a different sort of House? I asked. After all, the GOP primaries so far have not been kind to the “cut all federal spending, even for defense” faction known as the Tea Party.

“Yeah, you’re right,” Thornberry replied. “It’s not just which party is in control but what the makeup of each party is.”

That said, Thornberry argued the crucial changes are not just the GOP or even inside Congress as a whole.  They’re happening in Ukraine, North Korea, and the Western Pacific. “The world is reminding us that it’s a dangerous place,” he said. “The world is reminding people in both parties that defense has to be a very high, if not the very highest, priority of the federal government.”