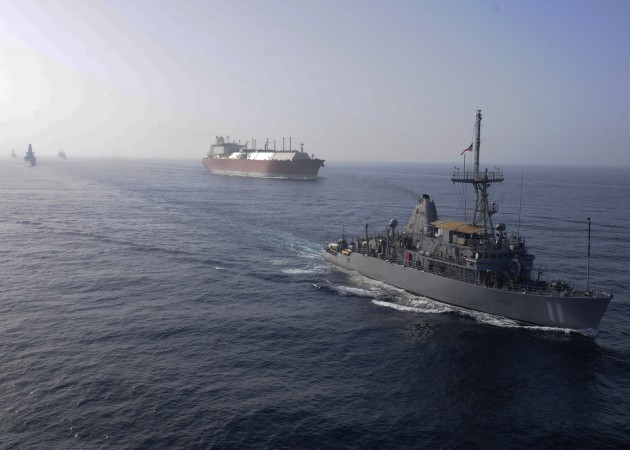 Warships practice escorting a tanker through the Persian Gulf.

Just nine months after hosting the biggest multinational mine-warfare exercises “ever” to be held in and around the Persian Gulf, the Navy’s 5th Fleet and its foreign partners outdid themselves with a second, even larger wargame. More than 20 nations participated in September’s International Mine Counter-Measures Exercise 2012, collaborating against fictional ecoterrorists whose capabilities were suspiciously similar to the real-world arsenal of Iran. This month, 41 nations and some private-sector companies participated in IMCMEX 2013, which despite the name expanded beyond minesweeping to practice protecting civilian oil tankers, oil rigs, ports, and even desalinization plants as well.

With participants from six continents, “the only part of the world that wasn’t represented in this exercise was Antarctica,” boasted Vice Adm. John Miller, the jet fighter pilot who commands both the US 5th Fleet and the multinational Combined Maritime Forces. “It was much more complicated than the exercise we put on back in September.” 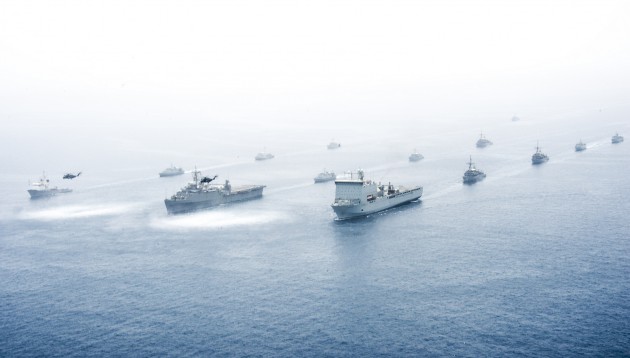 35 ships, 70 aircraft, and 6,500 personnel from 41 countries participated in the exercises.

In fact, the most important thing to practice wasn’t mine warfare itself, but coordinating a diverse multinational force. Not all 41 nations contributed warships, but there were still 35 vessels from patrol boats to the Navy’s “Afloat Forward Staging Base,” the USS Ponce; some 70 aircraft; some 18 unmanned underwater vehicles for minehunting (i.e. flying and swimming drones); and 6,500 personnel, including 100 divers trained to disarm mines by hand. That’s dozens of different languages, standards of training, and communications technologies, none of them necessarily compatible with one another. So while amateurs may talk strategy and professionals talk logistics, professionals also talk command and control. 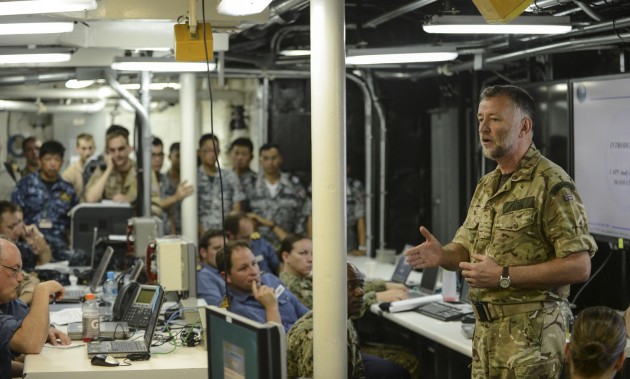 “As I wandered into the briefing room to see a sea of different colored uniforms, it was quite a sight,” said Miller’s deputy, British Royal Navy Commodore Simon Ancona, who ran the exercises day to day. “[But] things like communications data transfer, getting used to tactics that worked for all — as opposed to imposing one set of doctrine… all of that came together extremely well.”

“There was a moment in the exercise where the weather was really quite appalling,”  Ancona said, disrupting the wargame schedule but offering an unplanned-for opportunity to test the multinational command structure’s capacity to adapt to the unexpected. “The ability to command and control flexibly across all those forces [and] adjust,” Ancona said, “was in itself, for me, cause for minor celebration.”

One of “the two largest lessons from last year” was the need for “a properly constituted multinational staff in order to run the exercise,” Ancona added. Further complicating this year’s challenge was the addition of private industry, with private-sector tanker fleets embedding their operations officers in the wargame staff to “coordinate huge numbers of merchant ships.”

The second big lesson from 2012 was that “we can’t constrain these exercises purely to mine countermeasures when the problem is from port of departure to port of arrival,” Ancona said. “We have to include maritime security more broadly, and we have to include infrastructure protection.”

Iran, incidentally, boasts not only an estimated 5,000 naval mines but “swarms” of small, fast attack boats, shore-based anti-ship cruise missiles, surface-to-surface missiles capable of targeting ports or other targets ashore, and a global network of terrorist proxies. So there would be much more than mines to any Iranian attempt to shut down Gulf oil traffic – as suicidal as that would be for the Iranians’ own oil trade – and there would need to be much more than minehunting involved. Indeed, Iran is one of the US Navy and Air Force’s paradigmatic cases of a complex, multi-layered “anti-access/area denial” (A2/AD) defense against which they are developing a concept of operations known as AirSea Battle.

Just as they did last year, however, IMCMEX organizers insist the wargames are not about Iran. The first question at this morning’s press conference was from a Bahraini journalist asking how safe his country’s waters were from both the Iranians and Somali pirates, which Ancona and company emphatically refused to answer. “I don’t want to talk about the individual threats” from whatever source, the British commodore responded. “We are here to practice how to combat the generic threat of mines and the generic threat to both shipping and infrastructure.”

“Those are purely defensive activities,” Vice Adm. Miller emphasized. “These are all absolutely generic lessons which we could apply in almost any of the chokepoints [from] the Strait of Malacca to the Strait of Gibraltar.”

(Miller naturally didn’t drop any names, but according to the best estimates, mine warfare expert Scott Truver told me in an interview, “what’s left of the Soviet Union and Russia have about 25,000 mines; China has roughly 100,000; North Korea has roughly 50,000.” So while Iran’s leaders talk a good game, their arsenal of 5,000 sea mines is actually pretty small. of course, they can be deployed easily by one of the world’s most strategic chokepoints, the Strait of Hormuz).

“Many nations understand this is a global problem with global consequences that will require a global response,” Miller said, and “there’s a lot of enthusiasm” for a third mine warfare wargame in 2014. 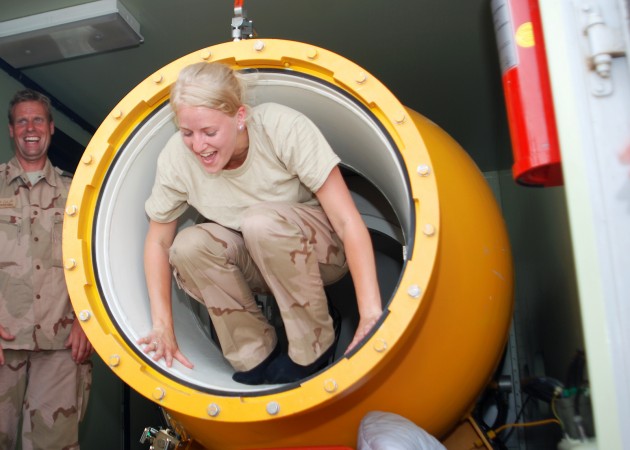 A Danish nurse checks out a hyperbaric decompression chamber for navy divers.