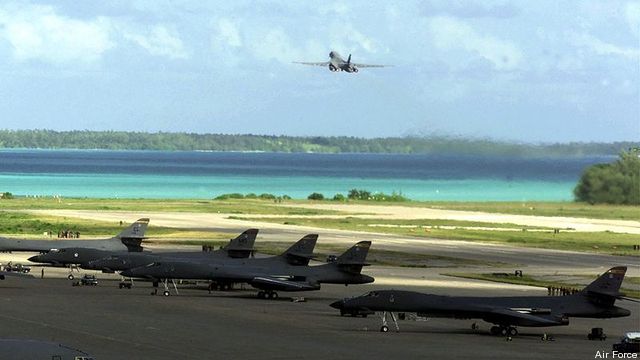 WASHINGTON: The United States, Britain and Mauritius have begun talks that may lead to the loss of ports, airstrips and listening posts on Diego Garcia, the remote tropical atoll that has played an important role in American maritime, air and space operations throughout Asia and the Indian Ocean for much of the last 50 years.

During an era when the Pentagon has declared a pivot from Europe and the Atlantic to Asia and the Pacific, the prospect of handing over so many installations located in such a strategic spot — or having them more accessible to a foreign government such as Mauritius — must worry Pentagon officials.

So we asked a senior Pentagon official. Here’s what he said: “Without commenting on discussions between other countries, the US military is the most flexible and agile in the world. We’re nimble enough to deal with any scenario, especially as we move toward a rotational posture in much of the Asia-Pacific region. Of course, it’s always preferable to have more options than fewer.”

So one gets the impression the risk isn’t considered very great, at least not yet.

But a change in status must have some implications, especially for operational security.

Under its current status as a British possession ceded to the United States, operational security is excellent for the simple reason that almost no one lives on the island unless they work for the U.S., Britain or an allied government. And the island is distant from almost anywhere else. Mauritius, at least publicly, says it wants the people who lived on the island to be able to return, something the British government has argued would not be feasible for security reasons, and because there really isn’t much of an economy. A coconut plantation that was the island’s mainstay has fallen largely to ruin.

Here’s what the British Guardian newspaper, which has covered Diego Garcia much more closely and critically than most publications, said today about the talks:

“After meeting David Cameron in Downing Street, the Mauritian prime minister, Navinchandra Ramgoolam, told the Guardian that the aim of talks with the UK and US was to reassert Mauritian sovereignty over the islands.”

“If Mauritius achieves its longstanding aim – supported, it says, in international law – it will mean the end of the British Indian Ocean territory. The territory was established in 1965 when Britain expelled the islanders and allowed the US to set up a large base in a deal that included cutting the cost of Polaris missiles for the UK’s nuclear submarines.”

It is not clear that the bases would have to be ceded to Mauritius or be closed. In fact, the Guardian said that Ramgoolam is coming here soon and is “likely to reassure the US that its base would remain on the island under Mauritian sovereignty.” Whether the U.S. and its allies would have the same unfettered access and, perhaps most important, control of the island remains unanswered.