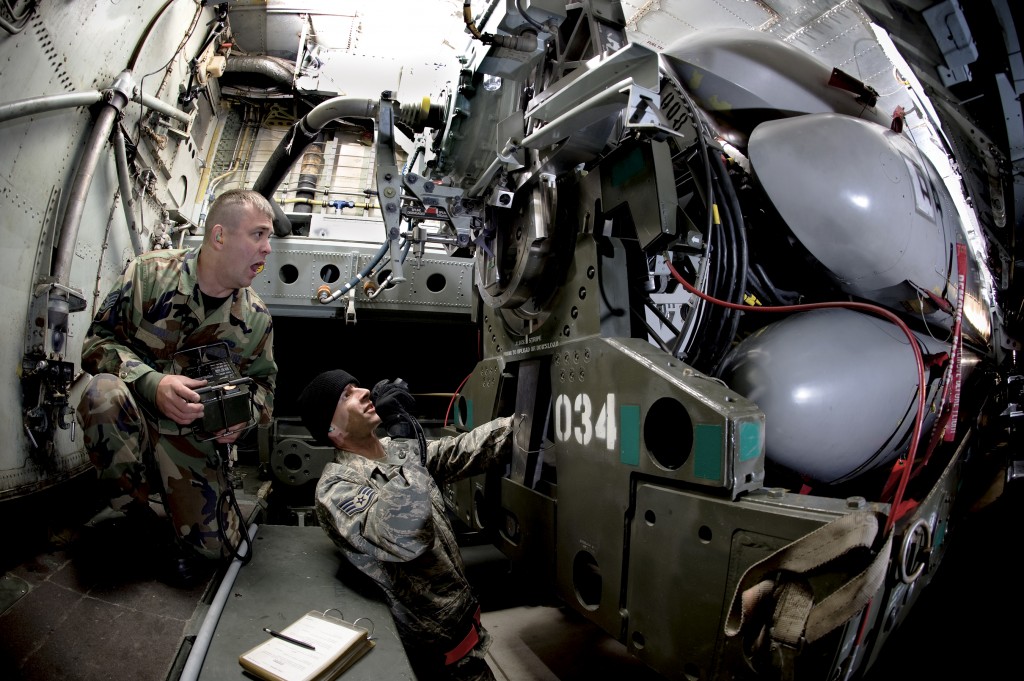 A B-52 is loaded with a rotary launcher full of (conventional) Air-Launched Cruise Missiles.

ARMY & NAVY CLUB: In the dog-eat-dog, admiral-eat-general world of budget warfare in the age of sequestration, it’s easy to pit programs against each other. The Navy’s new nuclear missile submarine and the Air Force’s Long-Range Strike Bomber, for example, are both huge strategic-weapons programs with enormous bills coming due in the next decade and much debate over who should pay. Strategic Command chief Adm. Cecil Haney emphasized here this afternoon that he needs both of them — and more.

“Strategic deterrence is more than the triad platforms,” the bombers, submarines, and ICBMs, Haney said. Other aspects — from EMP-proof communications to early warning satellites are equally important — and potentially as expensive. In particular, Haney said today, “moving forward with the replacement for the Air-Launched Cruise Missile [ALCM] is just as important as having a future bomber.”

Built in the 1980s but upgraded since, the nuclear-tipped ALCM gives Air Force bombers the ability to reach out and touch a target from hundreds of miles away, instead of having to fight or sneak through enemy air defenses to drop bombs. A single B-52H can carry 20 ALCMs, arguably the sole reason that the subsonic, non-stealth bomber remains relevant to nuclear warfare half a century after it entered service. Indeed, as stealth-defeating radars and long-range anti-aircraft missiles improve further — as part of the Pentagon’s efforts to defeat what it calls “Anti-Access/Area Denial” (AD/2AD) — even the stealthy B-2 and the future Long-Range Strike Bomber may well need cruise missiles to strike the hardest targets.

“As we look at the world and as it gets more and more complicated,” with the proliferation of A2/AD, Haney said, “it’s very important to be able to have standoff capability.”

But the ALCM is getting old. Its successor would be something called the Long-Range Stand-Off (LRSO) weapon, but work on the LRSO has slowed. Though the Air Force is invested in extending the ALCM’s lifespan, but a replacement would need to be ready ca. 2030.

That’s about the same time as the Navy’s stunningly expensive Ohio Replacement Program submarine would enter service. The Minuteman III ICBM might need replacement in the 2030s, too: The Air Force is currently conducting an official Analysis of Alternatives (AOA). And the nation’s nuclear command-and-control system — heavily dependent on satellite communications and computer networks — needs hardening against continually evolving space and cyber threats, Haney said.

The new missile sub “is my number 1 priority,” Haney said. But all these systems are complementary and necessary to a robust deterrent — and there is a limit as to how long American ingenuity can keep aging systems operational.

Haney has held high-level “stakeholder meetings” with dozens of admirals, generals, Navy captains, and Air Force colonels on the problem. “We had some very, very frank discussions about how best we could sustain and modernize,” he said. His first such meeting was on submarines, the second on ICBMs, and a third on bombers will follow in October. Beyond that, he said, “it’s not just the legs [of the triad], quite frankly, we will be looking at some of the other [elements] that make up the credible strategic deterrent.”

Meanwhile, Haney said, “I see increasing strategic risk as potential adversaries advance.” Russia has conducted two strategic nuclear exercises in the past year — highly publicized, complete with YouTube video — and “they have a decade plus of modernization across each leg of their triad, for example new submarines and associated submarine launched ballistic missiles; a new air launched cruise missile; more advanced mobile land based ballistic missiles.” As for the Chinese, they are “fielding the more survivable road mobile intercontinental ballistic missiles, enhancing their silo-based ICBMs, as well as developing and employing a new ballistic missile submarine.”

With Russia setting fire to Ukraine and China increasingly confrontational in the Pacific, Haney must feel more relevant than ever.