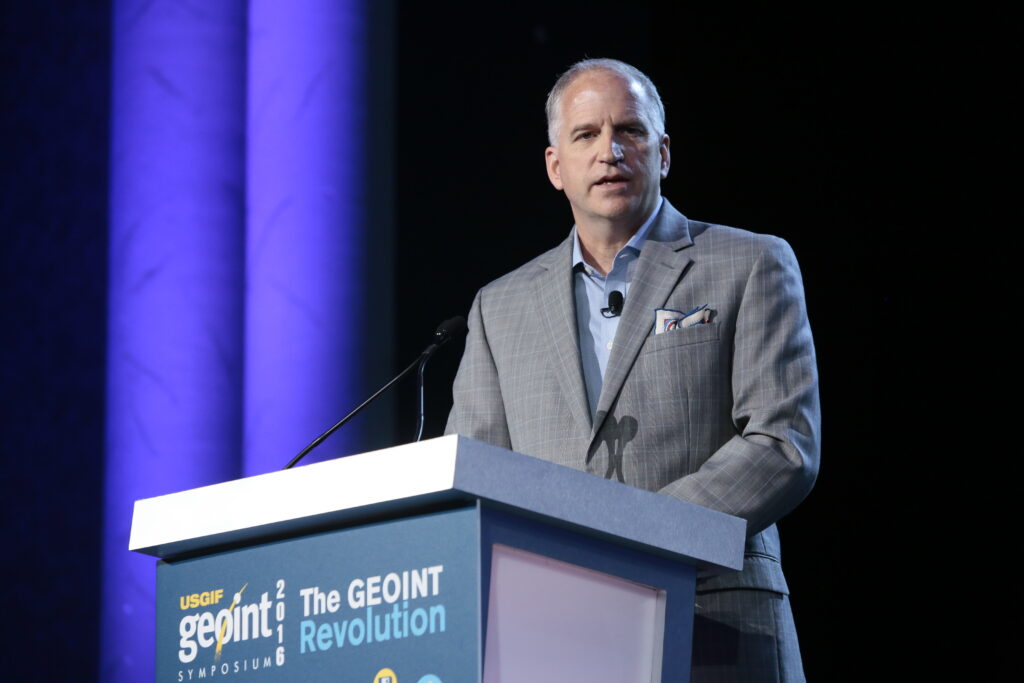 The new office will be called “NGA Outpost Valley,” a more euphonious name than the Pentagon’s unwieldy DiuX. “It’s a beachhead that will have the authority to reach out to all innovation centers,” Cardillo told a packed hall here. The GEOINT conference has an estimated 4,000 attendees, down from 5,000 last year.

In a Q and A session with reporters after his speech, Cardillo told me he would not be moving to Silicon Valley without his “partners” — he didn’t name them, but that would be NSA and NRO. His “bosses” on Capitol Hill and at the Office of Director of National Intelligence (ODNI) would not allow him to do that, he said.

Also, Cardillo made clear he’s absorbed the lessons that DoD has learned in setting up the DiuX. The people he will send there have experience in both Silicon Valley and NGA. NGA’s outreach will be led by Peter Highnam, former IARPA director (the IC’s version of DARPA), who is now NGA’s research director.

Alongside that move to northern California, Cardillo says NGA has doubled its investment in In-Q-Tel, the CIA’s effort to match the speed of commercial industry in deploying new tools: “To put our money where our mouth is, we’ve doubled our In-Q-Tel investment – to improve our effectiveness in areas like commercial space, visualization, and cybersecurity.”

While Intelligence Community language is often impenetrable to outsiders, Cardillo used a particularly good example of that to highlight a key new focus: “Object Based Production environment.”

“OBP extracts the important information from the frame of an image, to produce intelligence that’s more clear, more relevant, and more useful,” he claims. What does this really mean? It looks as if OBP will help NGA “automate manually intensive workflows – so we can detect patterns and behaviors hidden in the noise today.” So if a satellite or drone is monitoring an area and detects a new pattern of movement that will be automatically noted and lasted to analysts. The agency began transitioning to this new approach four months ago.

Structured Observation Management and OBP “are the fundamental building blocks of Activity Based Intelligence,” Cardillo says. Peel back the onion and here’s what it appears this will really lead to: “a work unit that puts analysts, human geographers, geospatial information specialists, web-developers, and data scientists in the same virtual and virtuous circle – creating that elusive – yet necessary – coherence from chaos.”

Perhaps most important over the long haul, because of a partnership with Germany that has expanded to “more than” 30 nations, NGA has built a global database that improves spacing from 30 meters to 12 meters. “In three years, more than a third of the Earth’s surface – including the parts we’re most concerned about – will be mapped – and shared (with allies and partners) – at this higher resolution. It will save time – and save lives.”

Finally, Cardillo unveiled a new acronym — “one of the best acronyms ever” – CIBORG  (Commercial Initiative to Buy Operationally Responsive GEOINT). The idea is to speed purchase of commercial data by partnering with the General Services Administration. Cardillo says it will be ready for business early next year.