North Korean H-Bomb? Unlikely. What Will China Do? 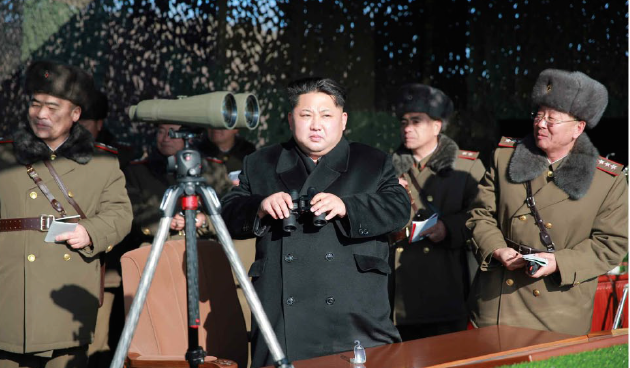 The White House spokesman, Josh Earnest, said, “the initial analysis is not consistent with the North Korean claims.” It does mean that China, its most important neighbor and patron, must make decisions. How will it proceed when this matter comes before the UN Security Council. What will Chinese President Xi Jingping say to his erstwhile equal, Kim Jung Un, he of the enormous baby face.

“The Chinese foreign ministry stated that they were not informed of the test in advance. A good, albeit lofty, outcome would be for China to embargo economic activity in response to the test, and temporarily close off airspace to North Korean flights,” said Victor Cha, a North Korean expert at the Center for Strategic and International Studies.

The Security Council meets sometime this week to discuss the test.

The Pentagon issued a predictable statement describing the test: “…an unacceptable and irresponsible provocation and is both a flagrant violation of international law and a threat to the peace and stability of the Korean peninsula and the entire Asia-Pacific region.”

The most interesting nugget in the statement was that, before Defense Secretary Ash Carter talked with his South Korean counterpart, he got what was described as “a situational update from Gen. Curtis Scaparrotti, commander, U.S. Forces Korea.” I think we translate that as he learned that no North Korean troops were heading south for the border and, perhaps, he got a debrief about the types of radiation and isotopes collected by U-2s, which were almost certainly flying over the site during or immediately after the test.

The most worrying thing about this test is that the North Koreans continue to spend enormous amounts of money on nuclear weapons development and continue to find places where they can buy equipment. While the US and its allies may toughen sanctions, the test raises question as to just how effective they might be.

Reaction on Capitol Hill was pretty standard, with members from both sides of the aisle condemning North Korea’s actions. Republicans used the test to blame the Obama administration.

“Unfortunately, the view around the world is that U.S. leadership is in decline while the Administration’s inaction only fuels those concerns,” Rep. Mac Thornberry, chairman of the House Armed Services Committee, said in a statement. Then he proposed some specifics about how to deal with test’s repercussions. “The U.S. must work with our South Korean allies to deploy missile defense systems, including THAAD, on the peninsula and work at home to strengthen our homeland missile defenses. We must also take immediate steps to strengthen our own nuclear deterrent, which is the foundation for our other defense capabilities.”

Rep. Adam Smith, ranking member on the HASC, offered a much more cautious reaction, perhaps reflecting the lack of immediate information about just how successful the test was. “We should very carefully follow the facts as they are confirmed in the hours and days to come,” he said. “We must continue to evaluate all actions of the North Korean regime and appropriately coordinate a response from the international community. Maintaining a significant U.S. military capability advantage throughout this region is a top national security priority.

The chairman of the HASC tactical air and land forces subcommittee and a member of the House Intelligence COmmittee, Rep. Mike Turner, said North Korea’s test “must be met with decisive action and condemnation by the entire international community.” Turner, who is president of the NATO Parliamentary Assembly, said he hoped the July NATO Summit, to be held in Warsaw, “will reaffirm unambiguously that in today’s dangerous environment, nuclear deterrence remains the ultimate and essential guarantee of Allies’ security.”

This would all seem to argue for even deeper support for the Ohio Replacement Program, which would provide the US with the most resilient part of the nuclear triad, as well as the Long Range Strike Bomber, which will be upgraded for nuclear missions.