WASHINGTON: The Navy has discovered problems with the welds on 12 nuclear missile launch tubes, some for America’s $122.3 billion Columbia-class submarine program and others for the Royal Navy’s Dreadnought submarines. The issue is serious enough that Rep. Joe Courtney, top Democrat on the House seapower subcommittee, told me “the warning flags are up.”

There is little margin for error, because Columbia boats begin coming online in 2031 just as the Reagan-era Ohio class are retired, and the nation needs a minimum of 12 ballistic missile submarines (SSBN) to maintain a nuclear deterrent force at sea at all times. A congressional staffer told us that the Navy “has a schedule with no room for delays and a cost estimate well below the 50th percentile confidence level.” And the problems affect the lead ship of the class, which are always very challenging,

“I have been studying lead ship issues for a long time,” the staffer told us in an email. “The issues with lead ships is that with the precious rare exception, something always goes wrong in the process of design and construction. (Emphasis in the original). The Navy always says lead ships are hard. They’re right, they’re very hard. Whether this particular issue will lead to a problem or higher costs or not does not matter so much as it is an indicator that things will go wrong to some degree or extent.”

How hard is all this? The program is the Navy’s top acquisition priority, the staffer said, but it is, “arguably, the most technologically complex weapon system ever proposed, so that it must perform flawlessly in both schedule and cost to meet the goals set for it. In my view, based on the history of lead ship programs and the details of this program in particular, cost growth and schedule delays are inevitable. This little hiccup, in and of itself, may prove to be nothing. I don’t know. But it is the canary in the coal mine.” 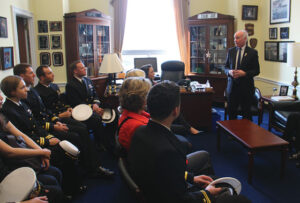 Courtney, ranking member of the House Armed Services seapower subcommittee, made a point of calling me about the problem on his way to Groton’s New London Submarine Base in Connecticut. “Based on the number of tubes we believe are involved, I do think the Columbia program can recover from this. It is (however) a blunt reminder issues of quality control. They have to monitored by industry and the government relentlessly.”

The chairman of the HASC seapower subcommittee, Rep. Rob Wittman, sent a clear message to GDEB and the service in a statement provided to us: “Because Congress supported an aggressive missile tube risk reduction effort, Navy is fortunate that this construction defect does not appear to disrupt the overall construction schedule. I believe that Electric Boat and the Navy need to aggressively identify and eliminate construction defects.”

Neither the Navy nor builder General Dynamics know the exact details of the welding problems because the welds, done by BWX Technologies, Inc. (BWXT), were not subjected to the most rigorous testing yet. Instead, the problem welds were discovered using “non-destructive” tests, according to Naval Sea Systems Command’s spokesman, Bill Couch. “BWXT is one of three vendors providing missile tubes for the Columbia/Dreadnought programs and one of two vendors for the Virginia program. All BWXT welding requiring volumetric inspection has been halted until the investigation is complete. Initial reports indicate that the other vendors do not have the same issue, and they continue to produce missile and payload tubes.” 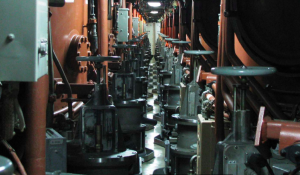 The missile compartment of an Ohio-class nuclear submarine, showing the launch tubes.

Courtney told me “there is still some question” as to whether the weld problems are “very serious” because BMXT “stumbled onto this.” Their testing equipment, he told me, “wasn’t calibrated right. That’s why the tubes kept being delivered. Now they need to get that testing thing aligned properly so then they’ll have a better sense of the problem. The seapower committee staff,” he promised, “will be on this like a hawk.”

None of the missile tubes have been installed on submarines, which should make finding and fixing the weld problems much easier, Courtney told me this afternoon as he was pulling up to the Groton yard. He was there for other reasons, he noted, but I’m betting he’ll let them know he’s watching closely.

The problems also affect an unspecified number of payload tubes for the Virginia-class SSN program.

The Navy, Couch said in his statement, “is working aggressively with the shipbuilder to mitigate any resulting schedule impacts associated with resolution of this issue, and working with the UK to ensure commitments made under the Polaris sales agreement are met.”

Couch said the Navy structured the program “to mitigate risks such as these, and construction start for Columbia remains on schedule in FY2021.”

BWXT is under contract with GDEB for 26 missile tubes and three Virginia Payload Module (VPM) payload tubes, which are in various stages of completion.