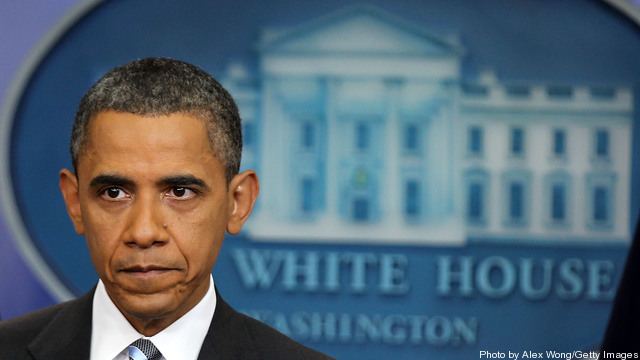 “I think we need to cut defense, but as Commander-in-Chief, I’ve got to make sure that we’re cutting it in a way that recognizes we’re still in the middle of a war, we’re winding down another war, and we’ve got a whole bunch of veterans that we’ve got to care for as they come home,” he said at one point.

Just before that, the president seemed to offer what seemed to be very deep and long-term cuts to defense spending. “Now, what that would require would be some shared sacrifice and a balanced approach that says we’re going to make significant cuts in domestic spending. And I have already said I am willing to take down domestic spending to the lowest percentage of our overall economy since Dwight Eisenhower.”

But budget analyst Todd Harrison at the Center for Strategic and Budgetary Assessment said he thinks Obama was talking about the $400 billion in cuts already made to the Pentagon — $75 billion in efficiencies and $330 billion in program cuts. Then you add the $400 billion in savings he has called for over the next 12 years on top of that. And you have a much more moderate number than might first appear.

But there are signs the budget cuts may be much more substantial than $400 billion. Marine Gen. James “Hoss”; Cartwright, outgoing vice chairman of the Joint Chiefs, told reporters yesterday he was looking at the possibility.

“I’m certainly doing budget drills beyond $400 billion,” Cartwright said. “Is there another $400 billion behind the first $400 billion — I don’t know what the number is.”

The repeated talk about cuts and more cuts may have prompted the Aerospace Industries Association, often judged Washington’s most powerful lobby shop, to call for caution.

“For months, there have been calls from a number of quarters for severe cuts that would undermine our dominance in the skies, fail to recognize the dynamic and changing security realities that we face in an age of asymmetrical warfare and which would undermine our industrial base and research capabilities for decades,” Marion Blakey, head of AIA, said in a press statement described as their reaction to the president’s remarks on defense spending.

“Instead of hiding behind abstract numbers pulled from thin air, it’s time for everyone to put their cards on the table. Almost $200 billion in defense spending has already been identified for the chopping block. Those calling for indiscriminate additional cuts should explain specifically how and why these cuts will not cost jobs or compromise our national security.”

Blakey called for “sobriety when it comes to cuts beyond those already made,” praising President Obama for showing just that in his comments.

In a sign of just how uneasy the president’s remarks must have made the defense industry, Blakey also said the country needs “specifics” on proposed cuts. “Budget proposals that fail to spell out how we maintain that second to none status are not proposals at all, but rather are merely rhetorical posturing. And the abstract calls of some for hundreds of billions in additional cuts don’t seem very sober at all,” she said in the press release from AIA.

Veteran defense analyst Loren Thompson noted wryly that the $400 billion number that currently stands is “only 4 percent of planned outlays” for those dozen years and — even if the president wins reelection — “Mr. Obama will not be in the White House for most of the next 12 years.”