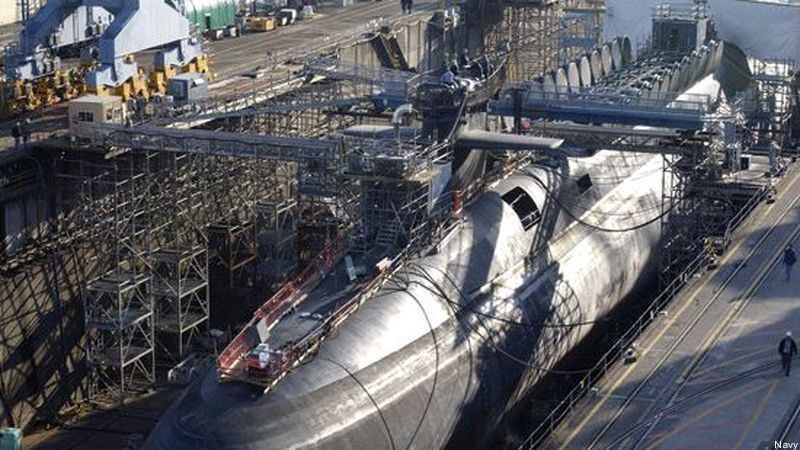 Washington: The White House Office of Management and Budget wants the Navy to reduce the number of SSBN-X submarines it buys from 12 to 10 boats but also to boost the number of missile launching tubes from 16 to 20.

On the face of it, this might save the Pentagon $7 billion over the 15-year life of the program. But there are many buts. Increasing the number of tubes will cost something like $300 million per boat, according to a source familiar with the program. And reducing the number of boats poses an operational challenge. The Navy aims to keep five boats on station around the globe. Normally, that would require 12 SSBN-Xs given the normal rotation. A boat goes on station, comes back, prepares for another mission and undergoes maintenance.

The Navy currently operates 14 Ohio class boomers. They entered service beginning in 1981 and the last boat entered service in 1997. The first boat will reach the end of its 42-year service life in 2027.

On the question of costs, the calculus is difficult to perform without access to the OMB analysis. But the source familiar with the program told me that the cost probably work this way. You save $7 billion by cutting two boats. You add $3 billion by boosting the number of missile tubes. Now you’re down to $4 billion in savings. Divide that by 10 and you get to this question: “Could you do it by increasing the costs of each ship by less than $700 million for a $5 billion boat?” Our source was not sure. The most likely way to reduce the time a ship of any kind spends in maintenance is to use better materials. Better materials cost more. Better materials are often harder to work with, which increases your labor costs.

But there are operational benefits to increasing the number of tubes per submarine. You could send warheads to a wider array of widely separated targets, something we understand Strategic Command really likes. StratCom, of course, runs the nation’s nuclear warfighting and helps drive requirements for all strategic weapons. “You could actually end up with something better,” by cutting the number of boats, our source who knows the program paid.
You probably wouldn’t save much over the next five years, since the first boat in any Navy class bears the budgetary burden of most non-recurring engineering costs. For the SSBN-X, the first first boat is currently projected to cost $11.3 billion, which includes some $4.5 billion in non-recurring costs. That drops quickly to $5.6 billion.
The fiscal 2012 budget requested $1.07 billion for SSBN-X research and development.
@CategoryFeature @MainPageFeature Naval Warfare OMB SSBN-X submarines