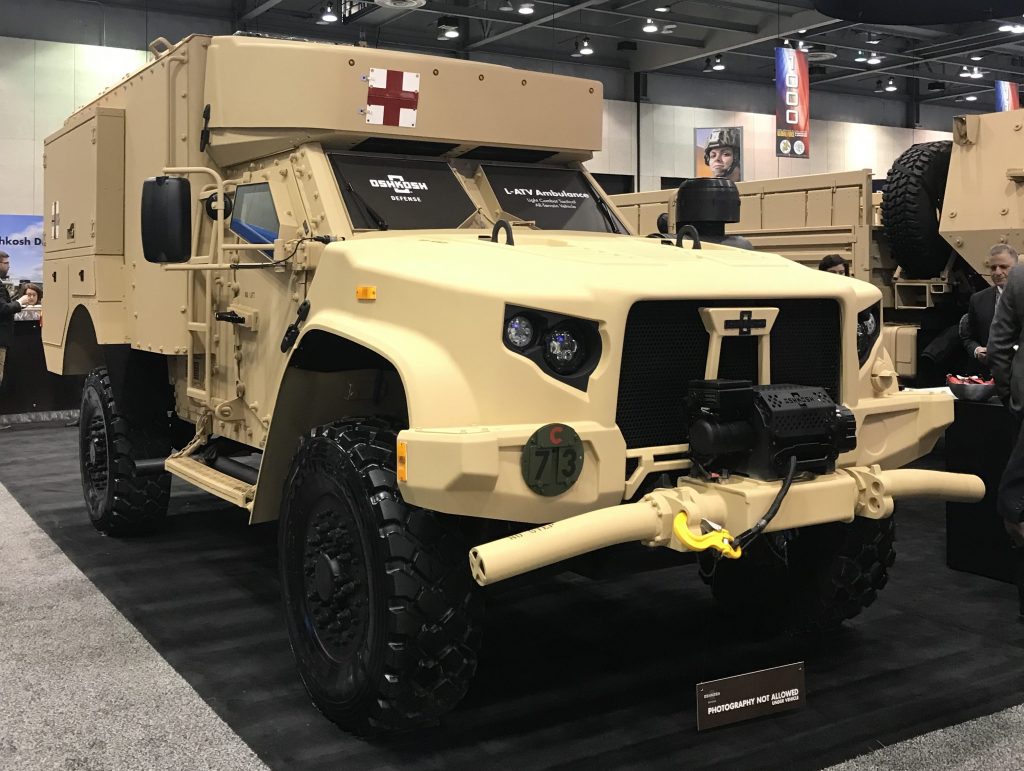 UPDATED from Army roundtable this am HUNTSVILLE: The Army may be buying fewer Joint Light Tactical Vehicles, but manufacturer Oshkosh is still so confident in its armored 4×4 that it’s rolling out a new variant here at the AUSA Global trade show: a JLTV ambulance the company developed at its own expense.

“We see a slight slowing of the Army buy across the FYDP [the 2020-2024 Future Year Defense Plan],” said Oshkosh Defense president John Bryant, an experienced former Marine Corps program manager himself. “It’s not an unusual thing in defense acquisition.” Very few major programs ever proceed as fast as originally planned.

But the important thing is the service hasn’t officially changed its plan to acquire almost 50,000 JLTVs over the life of the program, which will run into the 2030s.

“We’ve seen no change and we’ve heard no discussion about any change to the Army’s approved acquisition objective of 49,099 vehicles,” Bryant told me in an interview. Meanwhile, he said proudly, “the Marine Corps has publicly stated that it plans to increase its acquisition objective from 5,500 to 9,091.”

Now, Bryant may be too optimistic about the Army. In a roundtable with reporters just two days after the budget officially dropped, Army Undersecretary Ryan McCarthy gave a blunt “yes” when asked if the service was reassessing the total number of JLTVs it would buy over the whole program. If the Army continues with its current plans, he said, it would end up with more than 100,000 4×4 tactical trucks of various types. “55,000 Humvees, 49,000 JLTVs, 800 infantry squad vehicles,” McCarthy said. “We were buying more than we needed.”

UPDATE The Army’s 2020-2024 plan cuts JLTV funding by $800 million, McCarthy elaborated during a media roundtable at AUSA Global this morning. But the service doesn’t know how many fewer vehicles it’ll buy, because lowering the production run loses some efficiencies of scale and increases the price per vehicle. Depending on how the details work out between the Army and Oshkosh, the undersecretary said, “that $800 million could account for anywhere from 1,500 to 1,900 total vehicles.”

UPDATE CONTINUES The Army is still assessing how many JLTVs it needs overall, but with the program set to run through 2042, there’s time to make a deliberate decision. Will that total number — the Acquisition Objective (AO) — ultimately change? “Maybe,” said Gen. John Murray, chief of Army Futures Command, speaking alongside McCarthy this morning. “Has the AO changed yet? No.” 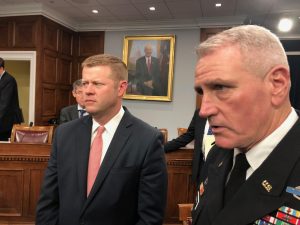 Cutting JLTV does fit with the Army’s Big Six modernization priorities, which emphasize systems for frontline combat — artillery, armor, aircraft, the network, air & missile defense, and soldier gear, in that order — rather than support equipment, such as lightly armed and armored 4×4 trucks. Yes, the JLTV is much better protected than the Humvee and more mobile off-road than MRAPs, the two main vehicles used against insurgents in Afghanistan and Iraq, but the Army is now focused on fighting (or, better yet, deterring) Russia and China.

All that said, Bryan’s big picture is still absolutely correct. The Army is going to buy tens of thousands of JLTVs over the next decade or two, the Marines have upped their JLTV purchase by 65 percent, and it’s quite possible US allies might start buying the vehicle to replace their relatively vulnerable Humvees as well. Oshkosh will have plenty of work not only building new vehicles but in maintaining and upgrading a massive fleet, which is where the big money is in the long run. 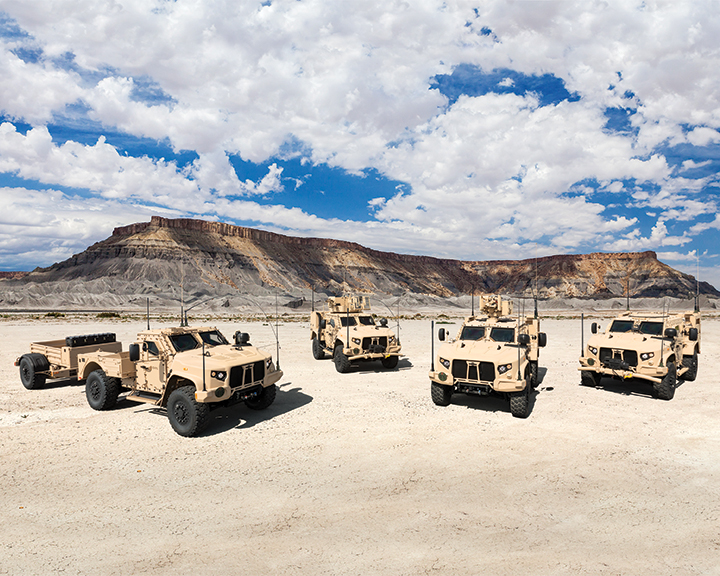 So it does make sense for Oshkosh to keep investing its own money in building new JLTV variants — which basically means sticking different stuff on a flexible truck body, not exactly intensive R&D. Each model is both a potential sales item in its own right and a photogenic advertisement for the vehicle’s versatility.

To date, according to a list Oshkosh provided, the company has shown off, in one venue or another, at least seven configurations featuring (not all at once) two types of 30 mm autocannon, the XM914 and M230LF; assorted machineguns; Javelin anti-tank missiles; Hellfire anti-tank/anti-aircraft missiles; a Trophy Active Protection System to stop other people’s missiles coming at the JLTV; and a laser. 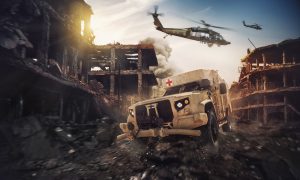 To date, the Army and Marines are only buying four types: three flavors of four-door JLTVs — a general purpose workhorse, a turreted gun truck, and a TOW anti-tank missile launcher — and a two-door utility variant, basically a militarized pickup truck. But the original concept for the program included additional variants, including an ambulance. So even though the Army isn’t officially asking for it, Oshkosh has grounds to think they might want it.

The JLTV ambulance is a pretty straightforward reconfiguration of the two-door model. It adds what Oshkosh rather grandly calls an “integrated mission module”: basically, a boxy cabin with room for a medic and patients either lying on four stretchers — stacked two on the left, two on the right — or sitting on eight seats. (The version they’ll display at Huntsville only has six seats installed, but you could add two more jumpseats, the company told me).

You can flip the seats up out to slot in the stretchers or remove the stretchers and flip the seats up, or do it differently on either side, say three walking wounded on the right and two more severely injured soldiers in litters on the left. The conversion requires no tools, Oshkosh joint programs manager George Mansfield told me, and is about as simple as folding up or down the backseat in an SUV.

“This [is] the first time we’ve offered — anyone has offered — JLTV-level protection and off-road mobility in an ambulance,” Bryant said proudly. But is that enough to get funding from an Army increasingly focused on AI, robotics, and high-tech firepower?