Ospreys Flying In Philippines; Up To 2K Marines Likely By Next Week 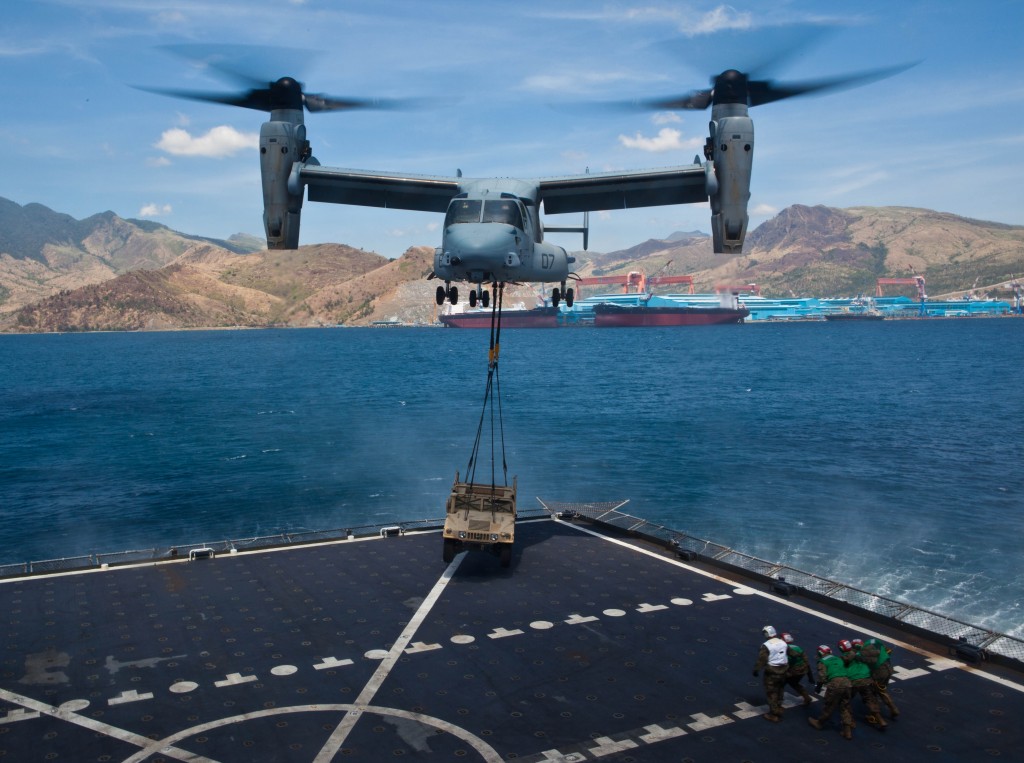 PENTAGON: If there were ever any doubts about the strength of the American commitment to the Philippines, they can be laid to rest by the substantial and growing military rescue forces heading into that beleaguered island state.

“The Philippines is a treaty ally and the United States stands by its friends and allies in time of crisis,” Pentagon Spokesman George Little told reporters today at an early afternoon briefing.

By contrast, China donated $100,000 for the relief effort and has reportedly flown one aircraft to the scene. As part of the US effort, four V-22 Ospreys are doing duty in the devastated landscape left by Typhoon Haiyan, Little said. A senior Marine Corps official told me the planes can fly from Futenma, Japan to Manilia non-stop. Add to that the Osprey’s ability to land in a wide array of settings and you’ve got what this Marine called “a transformational platform in the Pacific, in particular.” Filipinos have already seen the V-22 in action since they were used there in September during Operation Balikatan, a joint exercise practicing response to a large natural disaster such as the typhoon.

While they aren’t equipped for medevac duty — which would require medical facilities aboard to treat the wounded in-flight– the Ospreys are suited, the Marine said, for casevac (casualty evacuation), moving the wounded as quickly as possible from Point A to Point B. Of course, they can also be loaded with medics, food and medical supplies and fly virtually anywhere in the Philippines.

The senior Marine, who has commanded the Third Division in the Pacific and helped run major annual exercises to prepare for just such an eventuality as the typhoon, said it was likely between 1,500 and 2,00 Marines would be in the Philippines within a week given the extent of the damage. There are now about 260 Marines on the ground.

I asked if he had heard from any of his Filipino contacts. He had. The message they sent was simple: “It’s bad; it’s very bad.” That’s why there are likely to be more Marines on top of the carrier strike group currently steaming full ahead for the devastated area. Marine Brig. Gen. Paul Kennedy, the commander of the 3rd Marine Expeditionary Brigade who is leading the U.S. military’s relief effort, told CNN earlier today he needed amphibious ships as soon as possible. The amphibs can produce large quantities of drinking water, they carry LCAC hovercraft that can move heavy equipment to shore, and they can carry more Ospreys, a variety of helicopters, small boats, trucks, food, medicine and other supplies. Some amphibs include “pretty robust medical services on board,” the senior Marine official told reporters.

In addition to LCACs, the Marine said Amphibious Assault Vehicles (AAV) would be very useful because they can carry Marines from the ships and go just about anywhere once they hit land.