Our Nukes Cost More Than You Think; Stimson Pegs Annual Nuke Spending At $31B 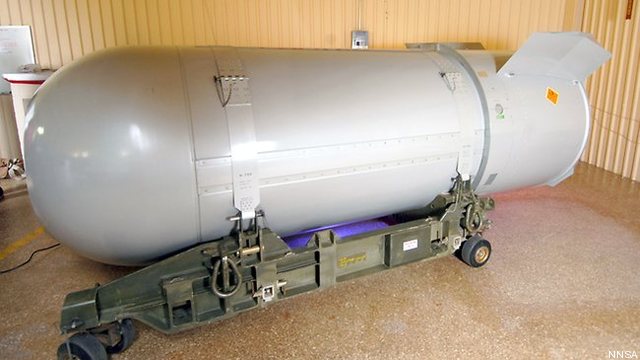 The defense budget is going down…have you heard? The presidential campaign is shedding a lot of heat, but very little light on this reality; you won’t hear much of substance about how or where it will go down. Or much sensible or reasonable discussion about how we manage a defense build-down in a way that saves money while ensuring we continue to be as secure as we are today.

In one nook and cranny of this discussion we find America’s nuclear arsenal, almost forgotten in the age of counter-insurgency and nation building. As the administration considers next steps in the size and shape of our strategic nuclear weapons, there has been a small tempest over the question of how much we spend on our strategic nuclear forces.

Knowing the size of the nuclear budget will not solve the policy dilemma: what is the right nuclear force for the 21st century? But an accurate evaluation of how much we spend today will establish the baseline from which that argument can be had.

Surprisingly, our understanding of how much we spend on strategic nuclear forces is quite imprecise and the Pentagon has been underestimating that spending by almost 100 percent, according to a new study — just out — from the Stimson Center.

The official DoD estimate puts nuclear weapons spending at $214 billion over the next 10 years, or just above $20 billion a year. Several independent studies have said spending is as high as $55 billion a year. Wild accusations have been thrown around in the last year about “low balling” and ‘high balling” the data.

The Stimson study decided it was time to “go to the fiscal video-tape” for a more definitive answer. It is pretty data-rich and moves a long way toward a more complete answer.

Like many such controversies, it comes down to a definition of what is in, and what is out. From the perspective of the Stimson report, however, the baseline the Pentagon uses is just plain too narrow, so narrow it is wrong.

The Pentagon counts what it calls “Strategic Forces,” which in DoD planning jargon is known as “Major Force Program One.” They add this DoD total – around $12 billion a year – to what the Department of Energy spends on nuclear weapons in the National Nuclear Security Administration (NNSA) budget (another $8 billon or so). All well and good, so far, but something(s) are missing. For some analysts, we ought to include the $10 billion or so we spend every year on missile defense. Some want to throw in the costs of cleaning up the environmental damage associated with the nuclear weapons complex, another $6 billion a year.

The Stimson report sets these wider programs aside. Even if we dismantled every nuclear weapon in our arsenal, we might want to spend funds on defenses against the nuclear capabilities of other countries and we would be stuck with the environmental bill, as well.

The singular contribution of the Stimson report is that it focuses on finding out what the Pentagon is spending in support of nuclear forces, but does not count in its Major Force Program One. Turns out there is another $11 billion in the Pentagon budget that is intrinsically tied to strategic nuclear forces that they are not counting, but should.

And other outsiders have tried to estimate these costs, largely by assuming that nuclear weapons and strategic programs are a given share of the budget, so they might be the same share of these particular budget categories. Critics say this method has led to an overestimate of the nuclear budget, but the Pentagon has avoided including the modernization costs and has not offered a better way to estimate the support costs.

The Stimson report is a step forward on this issue. It includes the modernization costs and it uses an inductive approach to estimate the support, going from the bottom up in the public Pentagon budget data. And the Stimson conclusion is surprising. It finds an additional $11 billion in support and modernization costs, every year, that the Pentagon is not estimating or counting. That’s $11 billion above the $12 billion the Pentagon agrees is their share of the costs of our strategic nuclear forces.

Command and control of the nuclear forces accounts for nearly half of the $11 billion. Research and development costs are another $1.5 billion per year, but these will rise as the submarine and bomber programs grow over the next decade. Tanker, housing and other support costs account for the remaining $3.9 billion.

Knowing the size of the nuclear budget does not answer the policy dilemma. But it does establish a more analytically coherent baseline for the budget argument. It is now up to the government agencies to develop a more accurate number. But the baseline number is clearer and higher than the current Pentagon estimate.

Gordon Adams, a member of the Breaking Defense Board of Contributors, was the last man at the Office of Management and Budget to preside over a defense drawdown. He teaches at American University and is a defense expert at the Stimson Center.