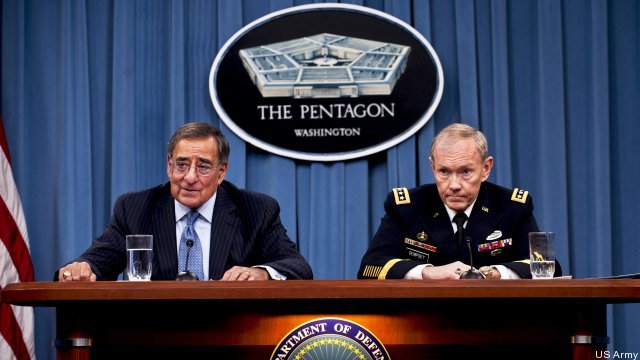 PENTAGON: Defense Secretary Leon Panetta and Joint Chiefs chairman Gen. Martin Dempsey took the stage together at the Pentagon this afternoon, 12 months after Panetta took office, to urge Congressional action against sequestration and to defend the administration’s strategy in Afghanistan.

The normally calm Panetta became audibly emotional as he discussed the sacrifices of the wounded troops he’s visited.

“First and foremost, when you walk in these rooms and see these wounded warriors, you cannot help but be inspired by the spirit that they have to fight on,” he said, his voice starting to quaver. “I had a chance … to go across the street to the Intrepid Center where they are providing rehab to our wounded warriors and they’re together, they’re all going through rehab together, there’s tremendous spirit, tremendous things are being done, miracles are being produced every day with regard to these kids.”

When a skeptical reporter asked point-blank why no one really talks in terms of “winning” in Afghanistan anymore, instead of just withdrawal, Gen. Dempsey stepped in:

“I’ve recently been to Afghanistan and I wouldn’t characterize it that way,” the Chairman said. “I think what you’re seeing is a recognition that as we’ve learned the lessons of the last ten years and of this kind of conflict is that winning is defined in their terms…. It is the Afghans that have to win this fight.” The American role is to hold the line and give the Afghans time to establish a government, an economy, and security forces that can function: “That is the definition of winning,” said Dempsey. “It’s that kind of conflict.”

On the homefront, the biggest battle Panetta and Dempsey are waging is clearly against sequestration. In his opening remarks, after a tour de horizon of the US military’s achievements in the year since he became Secretary, Panetta declared:

“Let me be frank: The biggest risk to everything I’ve talked about – to the health of our force to the well-being of our servicemembers and our families – is the threat of the sequester. Sequester will cut another $500 billion dollars across the board from our national security budget and do it in a way that threatens to hollow out our national defense. I’ve seen extraordinary examples of courage and sacrifice over the past year in the men and women I’ve met in the war zones and the wounded warriors I’ve met here at home. They are willing to put their lives on the line to protect our country. They deserve better than the threat of sequestration.”

“Congress can’t keep kicking the can down the road,” Panetta went on, citing the uncertainty and threat of layoffs that hang over the defense industry in particular. “This next week we celebrate the birth of our nation. It is a time for our leaders and for every American to recognize that the blessings of freedom are not free.”