Panetta’s Coming War In the Army and Marines

John Kenneth Galbraith, the noted economist, presidential advisor and ambassador, explored the origins of American financial crises and why many leading personalities in finance and government were unequal to mastering financial disasters they confronted.

Large institutions, he found, treasure predictability over all other considerations in picking senior leaders. Their mission is stability, not change. Until they confront existential crises that cannot be hidden from the public, leadership failures are brushed aside.

Defense Secretary Leon Panetta is about to make a similar finding about the Army and the Marines.

For nearly a decade, the Army and Marines have been dominated by personalities committed to “persistent warfare;” the Neocon doctrine of perpetual war inside the Islamic World through nation-building and counterinsurgency. The idea that a future conflict or crisis might involve a more dangerous opponent than a Muslim rebel armed with an AK-47 who plants an IED and then vanishes, has been dismissed out of hand.

Anyone who questioned the unsubstantiated belief that increasing the numbers of soldiers or Marines on the ground in Iraq during 2007 would do more than temporarily change local conditions or, worse, strengthen Iranian influence in Baghdad, were treated as disloyal. Officers who openly questioned the wisdom of eliminating the Taliban to the last man and of trying to build a model liberal democracy in Afghanistan did not survive.

After 911, truth, the first casualty in every war, was always in the eye of the story-teller with stars on his shoulder. With the departure of the leading story teller, Gen. David Petraeus, the overriding demand for economy in U.S. military operations should help Secretary Panetta move the Army and Marines away from the economically ruinous and politically unsustainable defense policies of persistent warfare. For the Army and the Marines, however, Galbraith’s existential crisis may have arrived.

Coping with the crisis will not be easy. The “persistent warfare” advocates are not about to go “gently into that good night.” Lt. Gen. Bill Caldwell who currently commands the North Atlantic Treaty Organization (NATO) Training Mission–Afghanistan in Kabul asserts in an article, “Building the Security Force That Won’t Leave,” (July 2011 issue of Joint Force Quarterly) that his tenure in command has witnessed dramatic improvements in the quality and capability of Afghan National Security Forces: “Today,” Caldwell writes, “we have over 70,023 ANSF in training, together with 75,682 who have completed training. We have educated them to almost twice the literacy rate of the country as a whole (approximately 50 percent versus 28 percent), producing better police by decreasing corruption, increasing stewardship, and reducing drug use. This is gradually garnering more respect from the Afghan people.”

In the absence of independent assessments, anyone remotely familiar with conditions in Afghanistan would be dubious that Afghan soldiers and police have achieved a 50 percent literacy rate. In fact, most officers in the grade of colonel and below returning from Afghanistan privately characterize the Afghan Army and Police as of poor quality, even by Afghan standards, and remarkably unmotivated to excel.

Accounts unfiltered by the U.S. Department of Defense report a far different picture, one in which ANSF forces either run from the fight or are routed from dug-in positions (as recently seen on the Pakistani border). In addition, the readiness of Afghan Police to cut deals with the Taliban in the form of local non-aggression pacts is well documented and widely reported. Finally, sources other than the Pentagon suggest the deterioration in the Afghan security situation never even slowed down during the entire 18 months of the so-called Afghan surge, and it continues to deteriorate as it has since 2005.

Unfortunately for Secretary Panetta, the challenge does not end with the persistent war disciples. He’s also got to deal with those senior leaders determined to preserve the status quo with yet another superficial technological “make-over” on the post-Desert Storm model.

The outlines of the 1990s “no change” strategy are already visible. To date, the Pentagon’s planned reductions of tens of thousands of soldiers and Marines universally exclude the elimination of general officer positions and the single service headquarters that support them in favor of eliminating the young soldiers and Marines who can deploy and fight.

Discarding large numbers of soldiers and Marines that could otherwise be incorporated into new fighting formations with new capabilities is a catastrophe. Such arrangements are reminiscent of the short-term thinking in America’s private sector where the focus on quarterly earnings trumps investment in research and development that would otherwise create a real competitive advantage down the road. Worse, senators and congressmen determined to keep old production lines open for old equipment; production lines that mean a few jobs now, but limit investment in the new capabilities ground forces will need in a future fight, are unwitting co-conspirators in this short-sighted strategy.

How Panetta will deal with these bureaucratic challenges is unknown. Fortunately, there is a successful private sector example worthy of his attention.

Confronted with a fundamental crisis when German prosecutors began probing allegations that Siemens, one of the world’s largest and most complex corporations, had spent $570 million in pay offs to acquire foreign contracts, Siemens’ board of directors appointed a new CEO named Peter Löscher. Fortunately for Siemens shareholders, Löscher wasted no time in restoring confidence and fiscal integrity. 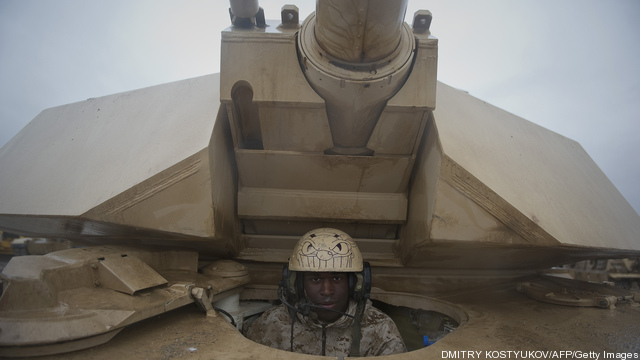 Löscher cut $2 billion from operating expenses and dismantled a corporate bureaucracy that once contained 200 separate management boards. Löscher also resisted pressure to squeeze short-term profits by reducing internal funding for research and development (unchanged at 5.1% of revenue in 2010) or his workforce of engineers. “This (Siemens engineers) is not overhead,” Löscher insisted, “This is our competitive advantage.”

If Secretary Panetta is to build the right-sized and -shaped Army and Marine forces to fit the nation’s security needs, he must preserve and enhance America’s competitive advantage through genuine reorganization and reform on the Siemens model. The alternative is no fundamental change, lots of overhead and minimal fighting power – a prescription for catastrophic failure in a future conflict against any opponent with capable air, land and naval forces; something American ground forces have not confronted since the Korean Conflict.

Col. (ret) Douglas Macgregor is a decorated combat veteran and author of four books on strategy and military reform. His most recent book is Warrior’s Rage from Naval Institute Press.