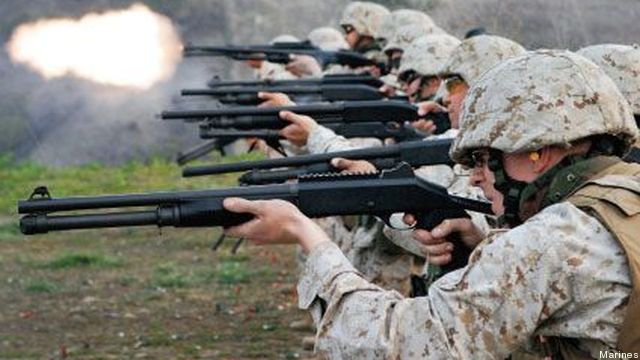 Everyone knows the global zombie apocalypse is coming soon. I’m here to tell you the military acquisition community needs to take it as seriously as the CDC does. If we’re going to survive the Day / Night / Return / Dawn / Shaun of the Living / Evil / Walking Dead, we’re gonna need some rules. For the convenience of my fellow military technologists, I respectfully offer the following:

Rule 1: Small Business
More than 1.05 million people are employed in the US aerospace and defense industry. These individuals are often found in big companies and are regularly described as having “big brains.” This concentration of larger than average cranial volume makes these companies prime zombie targets. The most reliable projections indicate complete zombification of all major defense contractors within 28 hours of the initial outbreak.

Unfortunately, zombies are notoriously disinterested in both systems engineering and federal contracting opportunities, so zombification would almost certainly reduce a company’s ability to provide new gear. Plus, zombies are stupid, so any proposals from a zombified company would most likely be low quality, perhaps even borderline non-responsive. I bet they’d even forget to address subpart 23.601(a) of the Federal Acquisition Regulation. Stupid zombies.

Further complicating things, even Fast Zombies move slower during daylight hours, so if ZomBoeing or Northrop GrummUndead wanted to compete for a contract and were able to write a good proposal, we can expect delivery times to be noticeably slower.

Pro Tip: To get what you need after all the major contractors are reduced to decaying, brain-slurping horrors, set up simple contracting mechanisms which allow rapid access to alternative businesses whose small size will enable them to avoid infection. The Small Business Innovative Research (SBIR) program is a good start, or check out the recent Rapid Innovation Fund as an example. If fighting zombies doesn’t count as a “critical national security area of particular interest,” I don’t know what does. As an added bonus, working with small businesses satisfies Zombieland’s Rule #8.

Rule 2: Speed
Mathematicians at the University of Ottawa modeled a variety of zombie attack scenarios, and their conclusion is as chilling as it is unsurprising: “a zombie outbreak is likely to lead to the collapse of civilization, unless it is dealt with quickly. While aggressive quarantine may contain the epidemic, or a cure may lead to coexistence of humans and zombies, the most effective way to contain the rise of the undead is to hit hard and hit often.”

Challenge accepted! However, the current 10-to-20 year acquisition process is entirely unable to rapidly field the equipment necessary to confront decomposing legions of evil. As an alternative to the untenable status quo, might I suggest the acquisition corps bone up on the FIST (Fast, Inexpensive, Simple, Tiny) approach to acquisitions instead? This methodology for building and fielding new military gear is worth a look, if I do say so myself. Full disclosure: I coined the term FIST in 2004, while operating in a secret military facility outside of Washington DC. Let’s just say its name rhymes with Zational Zeconnaissance Zoffice.

Along those lines, Richard Danzig’s brilliant Driving In The Dark report makes a compelling case for the need to “accelerate the tempo” of acquisitions and “build more for the short term.” Plus, it totally sounds like the title of a zombie movie. You should read it.

Rule 3: Simplicity
While highly complex advanced fighter jets and stealth bombers continue to account for a significant percentage of the defense acquisition budget, their relevance in places like Iraq, Afghanistan and Libya has been extremely limited. Unclassified zombie combat simulations, such as Lolipop Chainsaw, clearly imply these jets are equally irrelevant against the undead. For this reason alone, the JSF should be immediately cancelled and replaced with a crash program to rapidly develop inexpensive, simple technologies involving shotguns, lawnmowers, crowbars, chainsaws and/or cricket bats. Especially cricket bats.

At the very least, to ensure maximum anti-zombie impact, acquisition programs should direct their efforts towards the proverbial 70% solution, instead of spending decades and billions building overengineered, gold-plated wonder-weapons of questionable value.

Rule 4: Utility
While fire and explosions are time-honored methods of taking out zombies, the undead are largely unfazed by shock and awe tactics. Big Booms simply do not convey the same psychological edge against zombies that they provide in a non-zombie conflict. Whereas human opponents have been known to surrender in fear to unarmed reconnaissance UAV’s, zombies shuffle forward relentlessly even in the face of tremendous firepower. Accordingly, acquisition professionals need to focus on developing and delivering functional, utilitarian technologies that get the job done, rather than relying on intimidation and other psychological effects.

But utilitarian needn’t rule out awesomeness. How about a UAV equipped with a radial arrangement of downward-pointed 12-gauge double-barreled Remingtons? I call it a UAZ – Unmanned Anti-Zombie weapon. In my professional opinion as a military technologist, a UAZ would be both effective and awesome, emphasis on awesome. As an added bonus, aiming for the head is much easier if you’re shooting from above. Duct tape a couple chainsaws around the edges and you’ve got yourself a flying anti-zombie lawnmower. Try doing THAT to an F-35… on second thought, don’t.

Rule 5: Biotech
While chainsaws and shotguns are the most promising short-term approaches, there is certainly room for scientific exploration,particularly in the realm of biotechnology. Researchers recently discovered a hyperparasitic anti-zombie fungus that effectively fights zombie ant fungi and prevents further infection among an ant colony. It is reasonable to suspect similar parasites would be effective at stopping the spread of virus-based zombification (the most common strain) in humanity, although clearly more research is required. I mention it here because the phrase “hyperparasitic anti-zombie fungus” was too good to pass up.

Bottom line: sooner or later, the Undead are coming for us all – most likely, sooner. The time to prepare is today. Along with sending everyone to Zombie Fighting Bootcamp and integrating basic Zombie Fighting skills into the curriculum at Defense Acquisition University, the military technology community would do well to learn and follow these five rules. Shotguns and chainsaws on UAV’s – I’m just sayin’.

Of course, if the undead in question are vampires instead of zombies, we might need to adjust certain tactics and procedures. Unless it’s the sparkly kind of vampire. No need to worry about those.

Tune in next time when we’ll look at acquisition strategies to counter an alien invasion (hint: it’s Neil deGrasse Tyson. Seriously, a dude who took out an entire planet can defend Earth against aliens anyday)

Lt. Col. Dan Ward is an active duty acquisitions officer in the Air Force, stationed at Hanscom Air Force Base. The views expressed in this article are solely those of the author and do not reflect the official policy or position of the U.S. Air Force