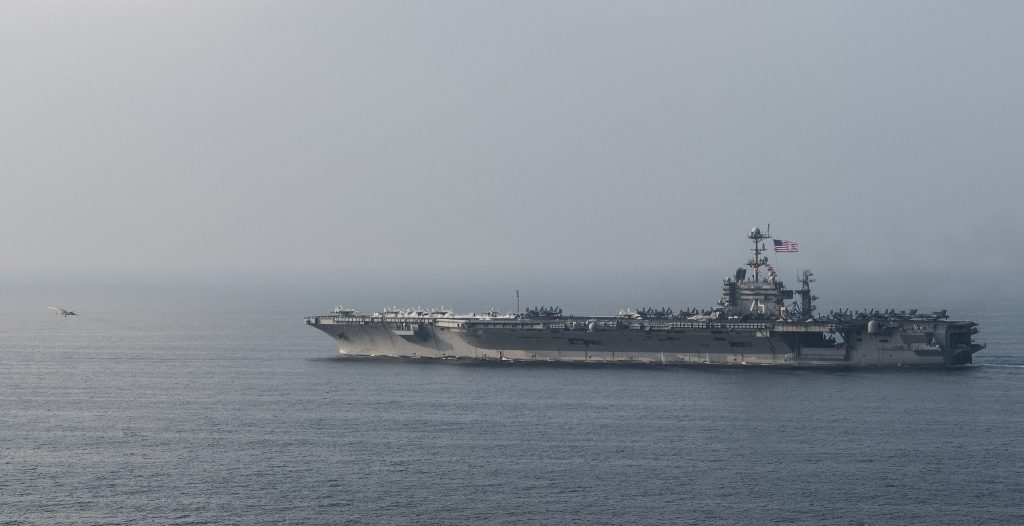 CAPITOL HILL: Pentagon leadership was only given a few hours warning Tuesday that Vice President Mike Pence would announce the Trump administration’s new opposition to retiring the USS Harry S. Truman 25 years early, as the Navy had long planned.

The last-minute heads-up came just after President Trump made the snap decision Tuesday morning to reject a key provision of the Navy’s budget he had approved earlier this year. The Navy estimates it would save $3.4 billion over the next five years — and $20 billion over the next three decades — by not refueling the nuclear-powered carrier, and retiring it around 2025.

A defense official confirmed that Acting Defense Secretary Patrick Shanahan was informed of the decision just before Pence’s announcement while aboard the Truman Tuesday morning. Another official involved in Pentagon budgeting and planning said their office found out only after Pence announced it.

In a sign of the scrambling inside the Navy, Adm. John Richardson, Chief of Naval Operations, scrapped plans to deliver a robust defense of the Truman decision in his prepared remarks before the Senate Defense Appropriations Committee on Wednesday morning.

In his original written remarks — struck at the last minute — Richardson was to say the Navy is “making tough calls about the capabilities we need to tackle future challenges,” and the decision to cancel the Refueling and Complex Overhaul (RCOH) of the ship would help fund a slew of other modernization programs.

That money was to be immediately reinvested “to field cost-imposing advanced technologies faster. In parallel, we continue to validate this decision through a rigorous program of studies, wargames and experimentation to analytically validate the best way forward. We remain postured to respond to what our studies show us and to adjust pace in-stride, including reversing the CVN 75 decision, if needed.”

Navy spokesman Capt. Greg Hicks said in a statement Wednesday that “the Navy looks forward to working with the White House and Office of the Secretary of Defense in support of the President’s budget.”

Since the day the Truman RCOH move was announced, a bipartisan group of lawmakers on Capitol Hill have railed against it. The chief complaint has been that doing away with a big deck at a time of increased military competition with China, and as the Navy lurches forward on its plan for a 355-ship fleet, would hurt the effort.

On Tuesday, Rep. Joe Courtney, chairman of the House Armed Services seapower and projection forces subcommittee, said he was planning to add the Truman money back into the Navy’s budget during markups this summer, a move likely to be repeated in other committee marks.

It’s unclear how much of that $3.4 billion in projected savings the Navy will get back for key modernization priorities like unmanned systems, long-range weapons, and lasers that service leaders said they would use the Truman savings to invest in.

Over the course of two Tuesday hearings with Senate and House lawmakers, the Navy leadership painted a picture of a fleet very much in transition — hitting some of its marks on time, but remaining off course on others.

“We believe we’re going to need to modernize our force in a way we haven’t thought of in the past,” nominee to be the next CNO, Adm. William Moran told senators.

The guidebook for modernization, for the time being at least, is current CNO Richardson’s Design for Maintaining Maritime Security 2.0 document, which was released in December. That paper laid out an agenda for the next several years that Moran, if confirmed, will need to attempt to squeeze into an already packed budget.

It calls for a contract for a new frigate to be awarded in 2020, a Large Surface Combatant contract let by 2023, the same deadline for contracts for the Large Unmanned Surface Vehicle program, and the CHAMP family of ships slated to perform logistics roles.

The unmanned portfolio alone will grow to over 200 small, medium. and large surface and underwater vessels over the next several years, signaling that unmanned capabilities are a priority for the Navy as it slowly grows the manned fleet.

Moran, like Richardson, said Tuesday that the growth of the Chinese fleet, and its ability to operate at range, makes investing in unmanned capabilities a requirement, as opposed to being a niche capability. “We clearly believe that unmanned undersea and unmanned surface [vessels] will help us expand those threat factors in the future at a lower cost because of the requirement not to man them,” he said.

The next several months will be critical for the Navy as Congress decides how much money to allocate to these priorities. But now that the $3.4 billion the service was counting to pay for much of that modernization appears gone, the effects will likely be felt across the service.