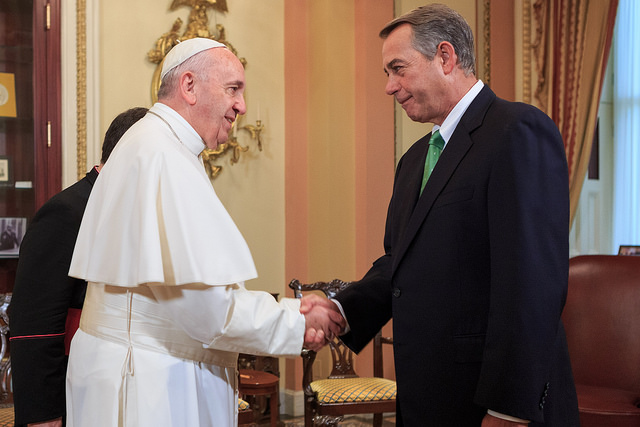 WASHINGTON: Speaker John Boehner, that always-tanned, often crying fellow who has led House Republicans since 2010, appears to have given up after new challenges from fiscal radicals in the Republican Party and announced his resignation this morning.

Boehner, a Catholic, campaigned for 20 years to bring a Pope to Congress. Yesterday he got his wish and then he decided to resign. Coincidence? Boehner was visibly emotional all day yesterday, so it’s a reasonable assumption. And one of his top aides reportedly told CNN this: “After yesterday with the Pope, he decided to leave on this high note.”

What is clear is that a group of roughly 50 Republicans known as the House Freedom Caucus — whose main job is to ensure that Republicans vote the same way they do, making the “freedom” tag a bit silly  — appear to have helped Boehner make his decision to leave. The question is, are Republican eating themselves as many Communist and other radical groups have done over the centuries by trying to “purify” their ranks and ensure only the truly faithful remain? Ironically, this “victory” of the far right could well mark the beginning of the end of their legislative power.

One close observer of Congress doesn’t think so, saying the fiscal hawks will take heart from driving Boehner out. “The freedom caucusers will be emboldened by this perceived victory at ousting Boehner. It does not bode well for December or next year at all,” Mackenzie Eaglen, defense analyst at the American Enterprise Institute writes in an email. “Everything only gets harder from this point on.” Eaglen has predicted a short-term Continuing Resolution followed by a mini-budget deal to deal with defense spending.

While some fiscal hawks may crow at Boehner’s departure, his likely successor (so far) is his deputy, Majority Leader Rep. Kevin McCarthy. McCarthy, who has only a decade of national legislative service under his belt, is the likeliest successor because he is not as radical as members of the Freedom Caucus. The fiscal hawks are unlikely to be able garner the 218 votes needed to grasp the prize. McCarthy is.

And it looks as if Boehner agreed to resign in return for Freedom Caucus members forgoing a government shutdown, irrespective of all that partisan silliness over Planned Parenthood funding. Eaglen believes the “House GOP has been paralyzed the past month with the threat of this resolution dropping. Boehner made the best decision for himself and on his terms.”

“We see an ironic sedative in the move — i.e., reduced odds of a shutdown next week. Nevertheless, with new unknowns about the thrust of House GOP input into key fiscal policy decisions now delayed into November-December, we raise our depiction of this year’s emerging “fiscal cliff-like” face-off from “3” on a scale of 10 to “4.” We also think the defense group could be seen more at risk, pending better clarity on how the next two months might now play out,” Callan writes in an email.

This brings us to the prospects for a government shutdown, an issue that really does matter to all Americans, our allies and our competitors. Deputy Defense Secretary Bob Work issued a broadly worded memo today to the military and to Pentagon employees about what a government shutdown would mean to them.

“The Administration, Secretary Carter and I continue to strongly believe that lapse in funding should not occur. There is more than enough time for Congress to prevent this from happening,” Work writes. He notes that all military would remain on duty but would not be paid “until Congress provides funding.” A short-term Continuing Resolution through December, followed by some sort of budget deal, continues to seem the most likely outcome to the best prognosticators I know. That would hurt, but would avoid the truly painful effects on the defense enterprise of an unprecedented full-year CR. That would mean no new programs — including the $5 billion earmarked for one of the Pentagon’s new top priorities, space control or counterspace or whatever we’re going to call it.

Below is the just-released Pentagon guidance for dealing with a government shutdown.