PENTAGON: Pratt and Whitney, as many assumed, will design and build the engines for the B-21 Long Range Strike Bomber, leaving B-2 bomber engine maker General Electric out in the cold.

Air Fore Secretary Deborah Lee James‘ announcement of Pratt’s role, as well as that of six other subcontractors working with prime Northrop Grumman, during the annual State of the Air Force press conference revealed virtually nothing more about the program. She made a point of noting the news was being released because the companies had completed their security protection plans for their work on the bomber. So I asked her which was more important to the disclosure of information about the bomber: maintaining strategic ambiguity so that China and Russia would find it difficult to design a counter to the airplane, or the security measures being put in place. 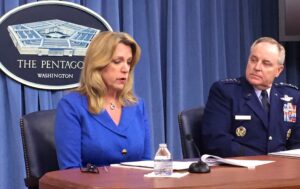 James made it clear that keeping the bomber’s capabilities a secret from Russia and China was the driving force behind the service’s decision to classify the great majority of information about the program. Will we learn much about what the plane can do?

“I don’t think you’re going to know for years much more about the technology,” James said. The secretary contrasted the approach they’ve taken with the B-21 to the B-2, which was shrouded in complete secrecy until November 1988 when the world was allowed to see the front of the aircraft in Palmdale, Calif, at Air Force Plant 42.

“The B-2 remained in the shadows for too long, it remained classified — too many details remained classified too long,” James said. (While the secretary didn’t say so, the extreme secrecy made it easier for B-2 opponents to characterize it as a $2 billion boondoggle). “In the case of the B-21, we are leaning forward, and we are trying to be more transparent, and we are going to continue to do so.” 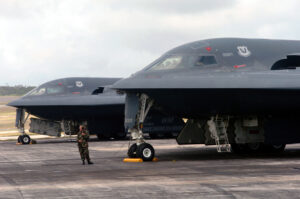 10 percent of the nation’s B-2 bomber fleet — totaling just 20 aircraft — is in this photo.

Perhaps the most interesting tidbit came from Lt. Gen. Arnold Bunche, who followed James and Air Force Chief of Staff Gen. Mark Welsh at the podium. I asked him if he could shed some light on what Frank Kendall, head of Pentagon acquisition, had meant last April when he said that upgrades to the bomber would be competed. Bunche said he thought this referred to the plane’s open missions system architecture.  It will allow the Air Force to  “more cost effectively and in a more timely manner integrate new technologies into the bombers.” So the fleet of 100 probably won’t be built by anyone but Northrop, but other companies will get to compete to build new systems for the bombers.

Here’s the list of B-21 subcontractors and the locations where B-21 work will be carried out: