FARNBOROUGH AIR SHOW: Cyber protection and attacks are rarely discussed, especially when it comes to fighters and bombers.

If you want to shut down a conversation with industry or government officials, start talking about radar, electronic warfare and cyber attacks. That, of course, is a good indicator of just how very keen the threat can be.

The Pentagon has greatly increased its focus on cyber security, requiring that weapons programs prove they are secure and design it in from the beginning and cutting people off of from access to military networks if their systems are not judged secure enough. 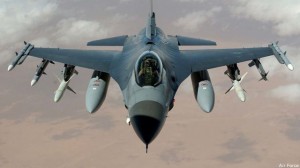 As Raytheon’s Todd Probert notes, the 2016 National Defense Authorization Act requires that all weapons be assessed for their vulnerability to a cyber attack. That pretty much guarantees business to companies.

So Raytheon has developed cyber tools to warn pilots and maintainers if their systems have been compromised. They are pushing this vigorously here at the show with a vivid 3-D presentation of threats and responses involving aircraft.

The company announced a contract today here to provide Jordan with cybersecurity for the planes that fly the royal family, according to FlightGlobal. Raytheon already does cyber work on the F-16 and V-22, and on Global Hawk’s command-and-control system.