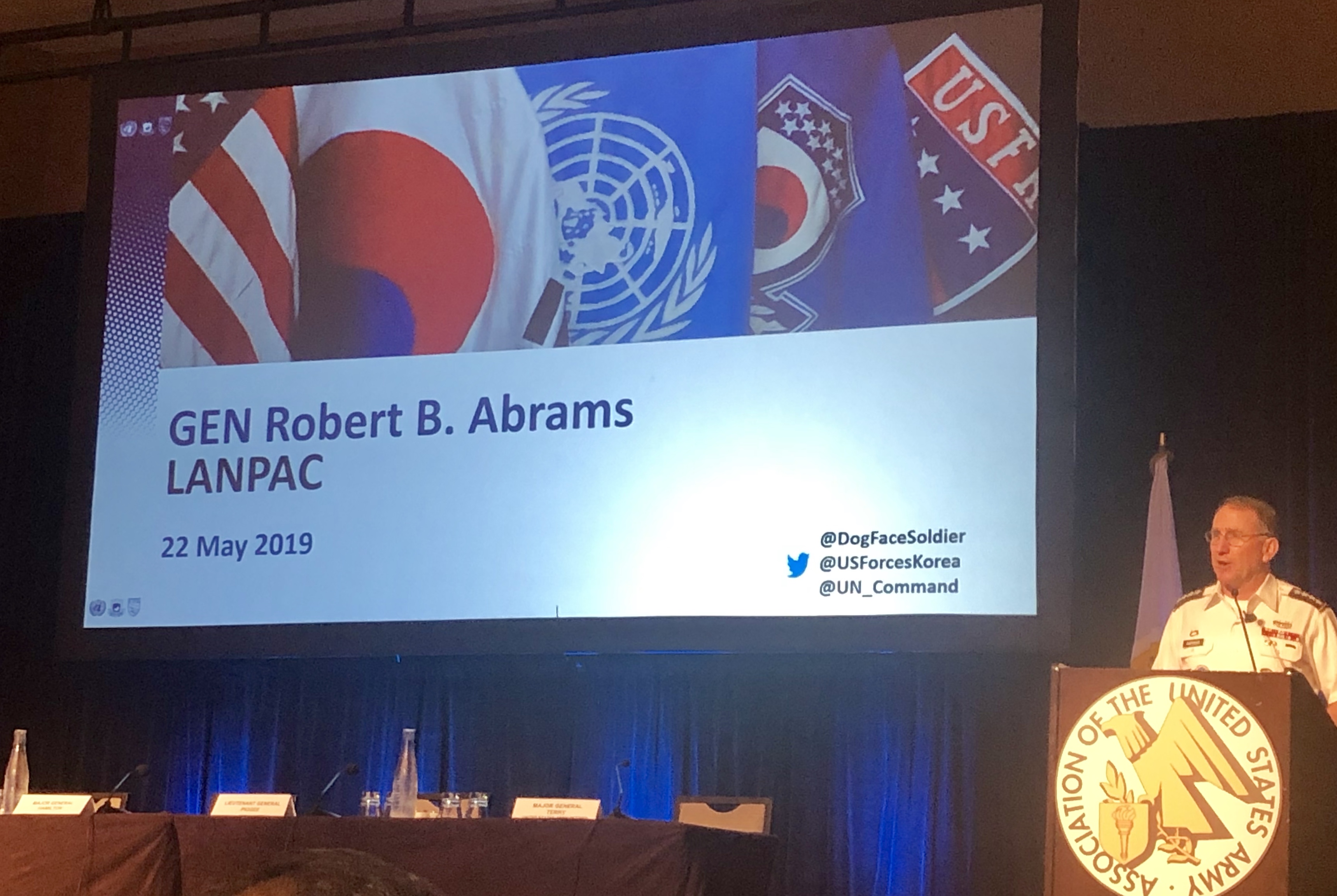 LANPAC HONOLULU: There’s been much gnashing of teeth about whether President Trump’s decision to suspend large-scale military exercises in the Korean Peninsula has harmed readiness. The head of US Force Korea said unequivocally and directly today that there has been no decline in readiness since the Singapore Summit.

In fact, Gen. Robert Abrams (with the great Twitter handle @dogfacesoldier) told the audience of more than 800 that “we field unquestioned and demonstrable superior lethality” on the peninsula. That audience included at least 24 Pacific military representatives from across the vast Pacific Ocean.

OK, but what about North Korea’s recent resumption of missile launches?

“Recent activities on the peninsula have not changed that palpable reduction of tension on the peninsula,” Abrams told me when I asked him about the most recent missile launches by North Korea.

“We continue to keep an eye on it,” while allowing diplomacy to work, he said, adding that a plethora of transparency and confidence building measures have been put in place since the Singapore Summit.

Both sides destroyed 10 of the more than 400 guard posts on both sides. “Not only were they destroyed, but as part of the verification process both sides got to verify with their own eyes that they had been destroyed,” Abrams noted. The inspection teams were led through minefields and escorted back. The size of the no-fly zone for drones and helicopters and other aircraft around the truce zone has been increased. Perhaps most striking to those who remember the armed guards from both sides that faced each other down across the DMZ, Abrams said “the Joint Security Area is completely unarmed today.” Finally, the feeds from the 40 closed-circuit TVs monitoring the Panmunjom truce area are being shared by both sides both sides. “This,” Abrams said, would have been “unthinkable in the past.”

I asked Abrams for his strategic assessment of the missile launches and he declined to share that, citing intelligence “sources and methods.” He highlighted the extremely close relationship between US and South Korean intelligence, saying “We have a very good sight picture of what is and what is not going on in North Korea.” He speaks with the leader of Korean forces when missile launches and similar events occur, “seven, eight or nine times a day” to ensure both sides know what is happening and each understand what it means. “Most important, “ he said, they discuss “how are we going to talk about it” in public and what message they need to send.

The son of the man who gave his name to the best tank in the world sent his own very clear message today: Diplomacy is working in the Korean Peninsula but US and South Korean forces are keeping a very close eye on the actions of the Kim Jong Un regime.