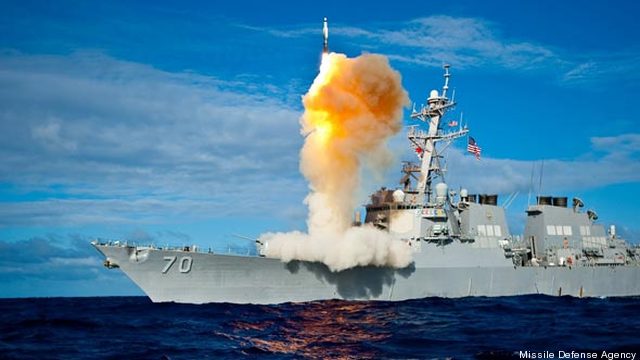 WASHINGTON: The House Armed Sevices Committee markup of the 2019 defense budget asks the Pentagon to test the feasibility of stationing a THAAD battery in Hawaii, along with stationing an Aegis destroyer permanently offshore to protect against attack. The legislation was introduced by Hawaii Rep. Tulsi Gabbard.

“Given the threat we face from North Korea, it’s critical that we evaluate all available options to provide Hawaii with a multi-layered defense,” Gabbard said in an email.

The language in the HASC strategic forces markup calls on the Navy and the Missile Defense Agency to brief Congress by Sept. 15 on how to supplement existing long-range missile defenses already stationed at Fort Greely, Alaska, and Vandenberg Air Force Base.

The panel notes that the SM-3 Block IIA, currently being developed with Japan, has yet to be successfully tested against  an ICBM, but “by assigning a permanent Aegis ship patrol to increase a layered ballistic missile defense of Hawaii, [there is] the assumption that SM-3 missiles might be effective against long-range threats.”

In January, the missile failed to hit its intended target in a launch from an Aegis Ashore testbed in Hawaii. In a July 2017 test it also missed the target.

The missile has been designed to fire both from warships and the Aegis Ashore system which is already in place in Romania, with another  currently being built in Poland. Japan is also looking to buy two Aegis Ashore  systems to add another layer of missile defense.

But MDA remains confident in the missile’s potential, and Lt. Gen. Sam Greaves, the organization’s head, said last month that another test will be conducted by the end of the year. “If proven to be effective against an ICBM, this missile could add a layer of protection, augmenting the currently deployed [ground- based defenses],” Greaves said.

That confidence was evident on Tuesday, when the MDA announced a $387 million deal with Raytheon for 20 Block IIA missiles, as well as up to four additional missiles for a potential Foreign Military Sale, the Pentagon said in a contract announcement. 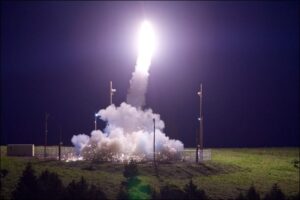 The ask for an Aegis vessel to patrol the waters off Hawaii is a slight change from previous discussions about stationing an Aegis Ashore system on the islands. The panel’s agreement to consider deploying the THAAD system asks that the MDA chief and Army secretary brief lawmakers by September 15 to address benefits, risks, cost, and trade-offs, along with “the untested capability of the THAAD weapon system against long-range threats.”

Last July, a THAAD battery successfully intercepted an intermediate-range ballistic missile in a carefully controlled test, but it has never been tested against long-range threats.

The idea of placing THAAD in Hawaii isn’t necessarily to take out North Korean or Chinese ICBMs, however. The potential threat is more complicated than that, given Chinese advances in missile technology in recent years. The idea is to devise a truly layered missile defense that includes long and intermediate-range interceptors, with a variety of sensors on the ground, at sea, in the air and in space.

The language in the markup reflects some of what Thomas Karako, director of the Missile Defense Project at the Center for Strategic and International Studies, expects to see in the forthcoming Missile Defense Review, which Pentagon officials say should be released later this month.

Up to this point, missile defense has been primarily aimed at countering Iran and North Korea, and their unpredictable and relatively crude missile capabilities. But the argument goes that, given the new era, defenses must be more distributed and layered to meet sophisticated adversaries, who can attack with hypersonics and other technologies that until recently were the exclusive domain of the United States.

“We’re not up against Saddam’s Scuds,” Karako said. “This is about very sophisticated air and missile threats from the very best of adversaries. Our missile defense posture has not been about that.”

Part of modernizing the entire missile defense ecosystem involves getting the different missile defense weapons to share information, something the Navy and Army have struggled with in the past.

On April 6, the Army’s two big missile defense systems — Patriot and THAAD — successfully “talked” during a test at White Sands Missile Range, New Mexico, as part of the Army’s plan to network the systems by 2020.

Both systems picked up and tracked a live short-range Lynx missile individually, and “exchanged messages through tactical data links and verified interoperability between the weapons systems,” according to an MDA statement.

While the Hawaii amendments to the fiscal 2019 defense bill are unlikely to be decided until the fall, work is already in progress on other missile defense upgrades for the state. MDA requested $21 million in fiscal 2018 to fund the Homeland Defense Radar-Hawaii, with another $62 million requested for next year. The radar is slated to go online in 2023.