German arms maker Rheinmetall is rolling out a new Active Protection System (APS) it says should lay Army safety concerns about such systems to rest. The Army is rushing to install anti-missile defenses on its armored vehicles but remains concerned about whether they might accidentally shred nearby civilians or friendly troops. The Rheinmetall system has been tested and certified to meet uniquely stringent safety standards, the company says.

It shoots down incoming missiles at the last instant, which they argue is (ironically) safer for surrounding troops than an early kill. (We explain below). 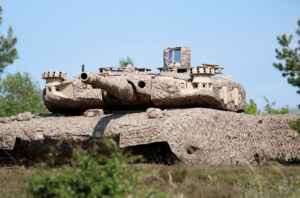 Active Protection Systems are essentially miniaturized missile defenses for tanks. Guided missiles have been a top threat to armored vehicles since the 1973 Yom Kippur War. After decades of improvement in both offense and defense, engineers have maxed out armor’s ability to take a hit, forcing them to find ways to decoy or shoot down the incoming missile before it hits at all.

The Russians led the way by deploying their primitive Drozd system to Afghanistan, where it frequently destroyed both enemy anti-tank rockets (RPGs) and nearby Russian infantry. Today Russian tanks make routine and effective use of active protection against Ukrainian anti-tank missiles, with some Ukrainian troops lamenting the Russians’ “magic shield” that stops their shots. So far, the only Western country to use APS is Israel. Why?

“In the West, we have to take care of things that the Russians don’t worry about quite as much,” said Rheinmetall spokesman Geoff Revill. “We care about our blue (friendly) forces, we care about civilians in an urban environment.

“We understand that this automated weaponry, it’s scary stuff,” Revill told me this morning. “It’s absolutely needed, but to be the guy that makes the decision to deploy it, the confidence levels have to rise significantly.”

So why should Western armies be more confident in the newest version of Rheinmetall’s Active Defense System, the ADS-Gen3? Two reasons, Revill and his colleagues say: the way ADS-Gen3 shoots down incoming missiles at the last moment — which is admittedly not a unique feature — and the way it’s designed and tested from the ground up to meet rigorous safety standards — which is.

There are two types of active protection systems, in Rheinmetall’s typology. The current world-leading system, the Israeli Trophy now being tested on US Abrams tanks, is a “launcher” type. It detects the incoming missile and launches a countermeasure, which intercepts the threat and detonates some distance from the vehicle. (See the video above). 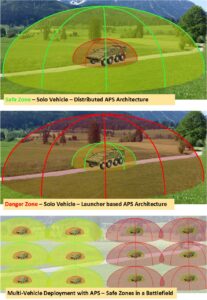 The problem with this approach, Rheinmetall argues, is it creates a big explosion some 30 to 40 feet away from the defended vehicle. That’s where friendly infantry are likely to be.

So “distributed” active protection system — like Rheinmetall’s ADS or DARPA’s Iron Curtain — instead puts small charges all around the vehicle (hence “distributed”). One of these charges then blasts the incoming missile at point-blank range just a fraction of a second before it impacts. Obviously that creates an explosion right next to the armored vehicle they’re protecting, but it’s not the highly focused, armor-piercing blast of an anti-tank warhead impacting the armor, so it’s generally safe for the vehicle.

It’s also generally safe for the infantry, who are trained never to accompany a friendly vehicle too closely because tanks draw a lot of fire. Likewise, during city fighting, civilians generally give tanks a wide berth. (A further safety feature is the distributed APS’s charges are usually positioned to shoot almost straight down, so any shrapnel is absorbed by the ground).

It’s hardly infallible, but it’s arguably safer to work with a vehicle you know occasionally gets engulfed by an explosion than with a vehicle that unpredictably blows up things at random directions and distances.

Besides the inherent advantages of a distributed system, Rheinmetall also claims their newest ADS-Gen3 was redesigned from the ground up to comply with rigorous safety standards and has gone through unprecedented, rigorous testing.

“You have to have imagine different ways to confuse the system,” said Ronald Meixner, Rheinmetall’s lead engineer on the project, an electronic warfare expert and a former German naval officer. The company drove the system (disarmed) through a car wash to see if the system would mistake a deluge of water droplets for an attack: It didn’t. (This was a major concern for an unidentified Southeast Asia customer who has to deal with monsoons). They took a leafblower and blasted the sensors with dead leaves. They attacked the system with phosphorous grenades. They mounted the system’s radar on the outside of a building and left it running for three years to see if it ever got fooled by a false positive, say mistaking a bird for an incoming missile: It didn’t. 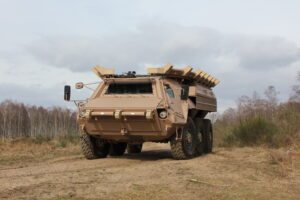 Rheinmetall’s ADS-Gen3 was independently tested by German auditing firm TMS, which does safety testing on weapons for the Bundeswehr. The auditors deemed it complies with IEC Safety Standard IEC61508 and later this year will meet Safety Integrity Level 3; the only higher level, 4, is reserved for things like nuclear reactors. That means, in layman’s terms, that the chance of malfunction is no greater than 1 in a 1,000. That’s considerable better than many airbags, which in some models of passenger cars have about a 1 in 100 chance of being defective.

Will this certification impress the Army? Facing an imminent Russian threat, the service already has a crash program to install Active Protection Systems on combat vehicles, and it left Rheinmetall out. (The Army’s installing Rafael’s Trophy on M1 Abrams, Israeli Military Industries’ Iron Fist on the M2 Bradley, and the DARPA Iron Curtain on the 8×8 Stryker). But the Army is well aware of these systems’ imperfections and is also working on a longer-term solution, the Modular Active Protection System (MAPS), designed to easily incorporate new technology from a variety of vendors (hence “modular”). Rheinmetall’s technology just might find a place there.