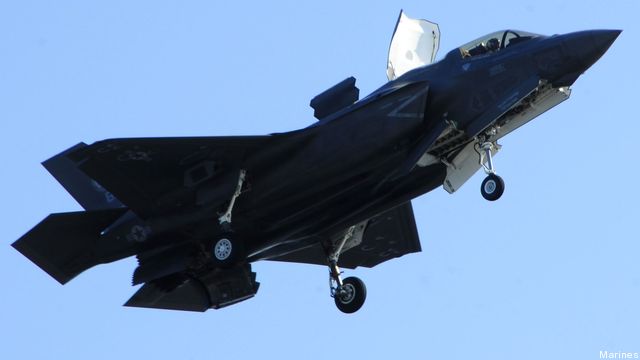 CORRECTED Indianapolis: One day after the Marines successfully landed a Joint Strike Fighter on a ship for the first time, Rolls-Royce executives showed off a new factory built to produce the complex lift fan system that is key to the F-35B STOVL variant.

The new plant, near the Indianapolis airport, is a large, antiseptically clean installation. But the $13 million facility also was nearly empty, with one completed lift fan on the inspection station and a handful of workers in a plant that was designed to produce seven of the powerful devices that allow the F-35B model to take off in a few hundred feet and land vertically, like a helicopter, each month.

Rolls-Royce officials told a small group of visiting reporters that they were concerned that defense budget reductions will make it more difficult for the engines prime contractor, Pratt & Whitney, to find cost reductions that might be needed to keep the F-35B alive.

“The volume reduction presents cost challenges,” said Gregg Pyers, who has nursed the LiftFan – as Rolls officials call it – from concept development to low-rate production. Although they have been working a “cost reduction plan” in concert with Lockheed, it would be “very challenging to be cost neutral” in adjusting to the slowdown in production, he said. “We have a mature LiftFan that is being proven,” by test flights, Pyers said. But former Defense Secretary Robert Gates put the F-35B on two-year probation and reduced production because of its technical challenges. Congress is in the process of slowing production even more in the fiscal 2012 defense appropriation bill.

The lift fan assembly we saw in the plant is the first produced at the new plant, but the 12th overall. It will be shipped to Lockheed’s Fort Worth factory on Monday for installation into the fifth F-35B of Low Rate Initial Production group 3. Assembly of the first for LRIP 5 will begin next week.

The assembly process moves through three so-called stack stations; where component are added to the fan, which takes power from the Pratt & Whitney jet engine to produce 18,000 pounds of lift. Each step of the process, and every part added is recorded on a computer display hanging over the production line. All tools are in secured cases that automatically record when one is removed, and who has it.

Parts are moved to the assembly line by a just-in-time supply system tied into the assembly process computer. Even the tools are smart; with electronic torque wrenches that apply just the right pressure to each bolt, and an automated cleaning process that uses dry ice, instead of toxic solvents.