WASHINGTON: Don’t worry about Russia building a killer robot someday. Worry about the radio-jamming drones they have today.

Despite a few grandiose claims and snazzy videos of robots shooting guns, Russia remains behind “the Chinese, Iranians, and the Turks” in developing armed unmanned systems, let alone the United States, CNA expert Samuel Bendett said this morning. The bad news, Bendett said, is that Russia’s notoriously bureaucratic military-industrial complex is finally getting its act together on robotics, with massive new investment and significant innovation. Worst of all, the one area where Russia is ahead is the invisible high ground the US Army ceded 20 years ago: electronic warfare. 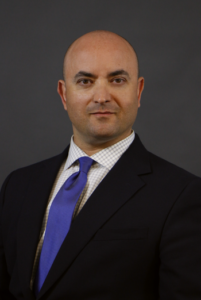 Bendett’s remarks at the Center for Strategic & International Studies were a timely dose of reality just days before the massive Association of the US Army conference here in Washington. At AUSA, countless government officials and corporate executives will tout costly technologies meant to deter the Russians. It’s easy to exaggerate the threat, because the Russians have excelled at propaganda since Potemkin’s fabled (and probably apocryphal) villages. Online videos show remote-controlled armored vehicles firing cannons and a humanoid machine, F.E.D.OR., shooting two pistols at a time like a Western gunslinger. And an estimated 30 percent of Russian military equipment will be unmanned by 2025, their Ministry of Defense claims.

The reality is less dramatic, Bendett said. For example, Russia’s much-touted Altair (aka Altius) seeks to develop an indigenous long-range UAV able to go nearly 1,000 miles, comparable to the US Predator. But Altair has run badly behind schedule and over budget, Bendett said, so badly it may now be “indefinitely” delayed. Just this morning, it was reported Russian authorities “removed” the company’s director, probably over “financial irregularities.”

For now, Russia remains heavily dependent on imported technology. The Uran-6 mine-clearing robot used in Syria is originally Croatian. (There’s no evidence armed robots were used in Syria, Bendett said). The recently unveiled Orion drone, with a 150-mile (250 km) range, looks suspiciously like the Iranian Shahed, which Russian troops have seen in action over Syria. Russia’s mainstay Forpost drone, able to go 187 miles (300 km), is imported from Israel, where IAI builds it under the name Searcher. (Note the irony of Israel taking billions in US military aid only to sell technology to Russia). Russia’s domestically produced drones tend to be shorter-ranged and small.

That said, a little drone can go a long way, since it’s easier for frontline troops to carry and control. Contrary to Russia’s reputation – not undeserved – for compulsive centralization, Bendett said, “Russians are pushing unmanned systems, especially UAVs (Unmanned Aerial Vehicles), down to the platoon and company levels,” letting junior troops get hands-on experience with the new technologies.

Russian troops and technicians are using those modest drones in inventive and dangerous ways. The Orlan-10, used from the Ukraine to Syria, isn’t particularly imposing. One fit adult can pick it up, and it carries just 13 pounds of payload – but the Russians have kitted it out for multiple missions, not just visual reconnaissance but also electronic warfare. A single KAMAZ heavy truck controls three Orlans, one of which acts as a communications relay while the others carry both airborne jammers and disposable jammers they drop to the ground. The whole system, known collectively as Leer-3, can shut down a cellphone network, selectively interfere with only some phones, or broadcast text messages to deceive and demoralize. 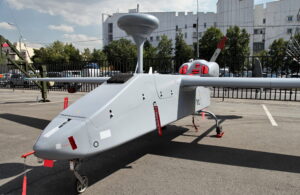 Forpost drone, the Russian name for the Israeli-made IAI Searcher.

Messing with cellphones might not seem like much – the Russians still use ground-based equipment to jam military-grade radios, Bendett said – but in the Donbass, the Russians shut Ukrainian military communications down so thoroughly that troops often resorted to their personal cellphones to communicate. Even in the advanced US military, troops routinely bring their personal phones into the field, unwittingly creating a way for a savvy adversary to track them and send them disinformation: The Wall Street Journal reported yesterday that Russian hackers attacked NATO soldiers’ cellphones, using drones to eavesdrop on insecure wireless devices. What’s more, Bendett argues, as the Russians buy more and longer-ranged drones, they could dramatically expand the reach of their jamming.

Drones that can jam radio waves are arguably more dangerous to the US military than drones that can shoot bullets. We’ve spent decades increasing the armor protection on everything from tanks to Humvees to individual foot troops, and anything that gets close enough to shoot us is probably close enough to shoot back at. (The exception is artillery, where the US is badly outranged). But after the Soviet Union fell in 1991, the US Army and Air Force largely disbanded their electronic warfare capabilities. Individual aircraft still have short-range jammers to confuse incoming anti-aircraft missiles, ground vehicles can jam IED detonators at short range, but wide-area, long range jamming was relegated to a relative handful of Navy planes. 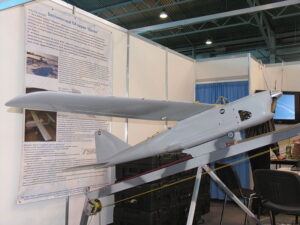 The Army talks a good game about wanting to revive EW, but so far it’s only fielding a small amount of equipment to a single brigade in Europe, with major purchases put off to 2023. The Army’s radio signals aren’t particularly resilient against jamming, either, which helped prompt Chief of Staff Mark Milley to cut short the service’s top network program, WIN-T. In this environment, the Russians and other adversaries can wreak havoc even with the relatively weak jammers on their drones.

Of course, the Russians are not standing still. Just a few years ago, Bendett said, the Russians had no unified policy on robotics, just a welter of independent and ill-coordinated initiatives by different agencies, companies, and universities. But the Ministry of Defense has been striving mightily in recent years to impose some kind of central control, cull wasteful projects, establish standards for testing, and advance a coherent strategy. 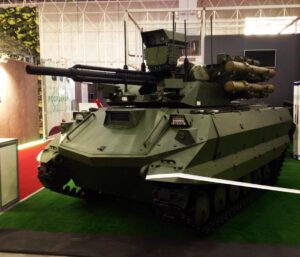 In 2013, the MOD created a robotics research center. In 2014, it created its own version of DARPA, the Foundation for Advanced Studies, which has its own robotics division. That same year, the MOD created a robotics commission personally chaired by the Minister of Defense and issued an official strategy for “potential military robotics through 2025” – measures that might be routine bureaucratic exercises for the Pentagon but not for Russia. In 2016, it launched the first annual conference bringing together military officers, government officials, and industry representatives to discuss “Roboticization of the Armed Forces of the Russian Federation” – again, the kind of gathering that’s routine for the US government and defense industry (just look at AUSA) but a novel form of coordination for Russia.

One pleasant surprise to emerge from all this ferment, Bendett said, is how many Russian officials have said they’re uncomfortable with unleashing lethal robots. Rather than trust artificial intelligence to decide when to pull the trigger, many Russian leaders want a human in the loop. That position, though still evolving, is remarkably similar to stated US policy.

The Russian’s reluctance might allay some American fears. But the Ukrainian survivors of Russian jamming can tell us that there’s much to fear that already exists.