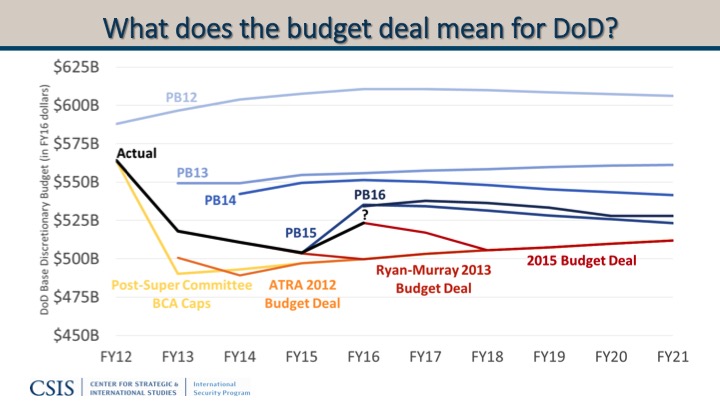 WASHINGTON: The budget deal setting spending levels for 2016 and 2017 is less than a month old, but pro-defense legislators already want to revisit. A top aide to Sen. John McCain said the Senate Armed Services Committee chairman and his allies will “absolutely” try to revise the 2017 Pentagon topline upward. But our sources — on and off the Hill, from the left and from the right — said they’ll fail.

“In six to eight months, my assumption is we’ll be having this argument once again,” said Christian Brose, staff director of the Senate Armed Services Committee. SASC chairman John McCain, his House counterpart Mac Thornberry, and “other members of the committees will absolutely be [pushing for] moving that topline up,” Brose told a Center for Strategic and International Studies conference yesterday.

The current budget deal calls for defense spending to fall from 2016 to 2017, Brose noted. Reversing that decline will be “pretty difficult to do,” but the trends are favorable, he said: “The fights that we’ve been having are coming out increasingly in favor of those who believe we need more defense spending.”

Can defense hawks really pull this off? My sources uniformly answered: No.

“I don’t disagree that defense hawks are unsatisfied with next year’s topline but there is absolutely no way, zero, the budget caps will change,” said Mackenzie Eaglen, a noted conservative commentator (and frequent Breaking Defense contributor) at the American Enterprise Institute. “I must admit even I was surprised at Chris’ comments — and that is usually not the case since we’re in close and regular contact,” she said. “[But even] good friends have to disagree once in a while, right?”

It’s “wishful thinking” to imagine the Defense Department can get more in its base budget for 2017, two battle-scarred ex-Hill staffers agreed. That said, there might be some wiggle room in the Overseas Contingency Operations (OCO) accounts, which as (technically) emergency wartime spending are exempt from normal limits.

But this year’s veto fight discredited the wholesale use of tens of billions in OCO to bypass the budget caps, as McCain and Thornberry attempted in the original, vetoed version of the 2016 NDAA.

“The GOP could try to add additional OCO again, but then the same debate that took place this year would take place again,” said one Hill staffer. Only this time, the staffer said, “it would be more difficult to push for higher DoD spending since any variance from the [budget deal] could cost the bill votes on both sides.”

In essence, the latest budget deal was so difficult to pull off, and required stuffing so many worms into the can, that reopening the issue is politically too painful to contemplate. Of course, because the deal only covers two years, 2016 and 2017– just as the Ryan-Murray deal covered 2014 and 2015 — the issue will reopen itself automatically when the 2018 budget comes up. But voluntarily unraveling the deal before then would require more political will (or masochism) than either Congress or the President has shown.

“There are many voices in Congress that will say ‘stick to the deal,'” said Tina Jonas, the former Pentagon comptroller, speaking alongside Brose at CSIS. “It’s going to be a political year, things will be exciting, but in the end, my prediction is we’ll come up someplace around the marks in the budget deal.”

Brose argued at CSIS that the political ground is shifting in fundamental ways. “You already see presidential candidates on both sides arguing for a higher defense topline,” he said at CSIS. “I don’t think we’ve had a consensus to spend more to spend more on defense,” he acknowledge, “[and] to extent that we do now, it’s pretty shaky, but the trend is there.”

The election campaign won’t provide enough pressure, two of my sources countered. It’ll take the election results and a new administration to really change the topline — and even that is far from guaranteed.

“Yes, sentiment is changing and has been since sometime in 2014, but I don’t think we will really see a dramatic change absent a new President, regardless of party,” said second Hill staffer. “Rank-and-file members may be more attuned to national security after the rise of ISIL and other threats, but historically it requires a President to truly change the top line of the defense budget. There is absolutely no indication this President has any interest in doing that.”

“I’m not confident at all that the FY17 topline will end up higher than the budget deal,” said arguably the capital’s most prominent defense budget guru, CSIS’s own Todd Harrison. “[But] I have a bit of hope that with a new administration in 2017, we could get a four-year deal to raise the budget caps” — instead of the last two two-year deals — “and get back to a more normal budget process.”

There has been a slow, unsteady stagger back towards normal, Harrison said. (See the graphic above). The widest gap between the Pentagon’s requested budget and what the law actually let it spend came in fiscal 2013, the year sequestration came into effect. Since then, on the supply side, a series of budget deals — actually starting in December 2012 — have inched the budget caps upward. At the same time, on the demand side, the administration has kept reducing its requests — with the notable exception of 2016. There’s still a sizable gap, but it’s narrowing, which reduces, if hardly eliminates, the budget turmoil.

“There has been a gradual convergence between DoD’s budget requests and the BCA budget caps,” said Harrison. “The uncertainty gap has been closing.”